King of England and Denmark

Hardicanute, or Harthacnut, the son of King Canute and Emma of Normandy, who was born soon after the couple's marriage. Hardicanute spent his childhood in Denmark, where he was sent by his father.

Canute had three sons, Sweyn, Harold, and Hardicanute. On the death of his father, Canute, in 1035, Hardicanute succeeded his father on the throne of Denmark and Sweyn became King of Norway, Hardicanute's position as Canute III of England was usurped by his detested half-brother Harold I known as 'Harefoot', Canute's son by either his mistress or his first wife (It is not clear which), Elgifu of Northampton. 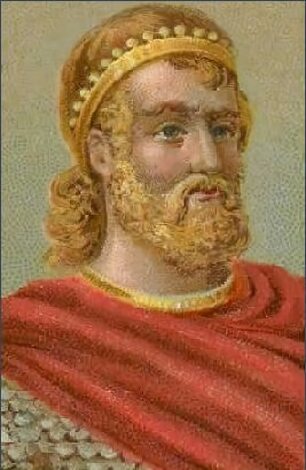 Hardicanute's involvement in a war against King Magnus I of Norway resulted in his not being able to secure his claim to the throne of England. Consequently his illegitimate half-brother Harold Harefoot was appointed regent there. Harold promptly betrayed his brother and took the throne for himself.

Hardicanute eventually came to an agreement with Magnus, through a treaty of either 1038 or 1039, by the terms of which if either he or Magnus were to die without an heir, his opponent should become his successor. Harald's death on 17th March, 1040 while Hardicanute was planning an invasion, made it possible for him to peacefully ascend the English throne. Hardicanute landed at Sandwich with his mother, Emma of Normandy, on 17 June, 1040, seven days before Midsummer, with a fleet of 62 warships.

He was an even less appealing character than his brother's. Those who expected a return to the just rule of Canute were to be sadly disappointed. His first act on arriving in his new kingdom was to have his half-brother Harold's body disinterred, beheaded and slung into a marsh, causing outrage amongst churchmen. Hardicanute could be brutal and savagely vengeful.

He was said to have hated his paternal half-brother, Harold, for the murder of his other, maternal half-brother, Alfred the Atheling (his mother Emma's son by Ethelred the Redeless) during a visit to England, at which he was said to have felt great sorrow. Determined to thoroughly avenge this deed, Hardicanute had Earl Godwine put on trial, but Godwine managed to extricate himself, was acquitted and managed to retain his extensive estates. Extremely wealthy, he bought the friendship of the new King with an expensive gift of a magnificently adorned ship.

Already suffering from bouts of illness before he became to England, which may have been tuberculosis, in 1041, influenced by Emma, he invited his surviving half-brother Edward the Confessor back from exile in Normandy, treated with much kindness and appointed Edward as his heir. Harthacnut was unmarried and had no known children. 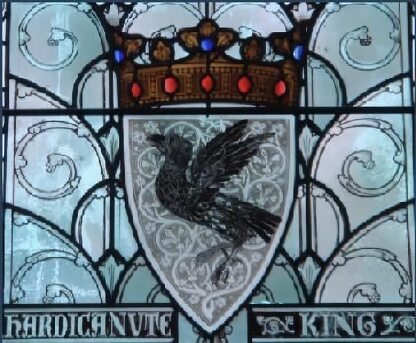 Hardicanute proceeded to make himself thoroughly unpopular by exacting high taxes. The citizens of Worcester rose against the crushing level of taxation, and in savage retribution, he burned their city to the ground. He further sullied his reputation by resorting to having the northern Jarl Edwulf murdered. The Anglo-Saxon Chronicle stated that he never did anything worthy of a King throughout his entire reign.

After a two year reign, he died during a riotous drinking bout at Clapham, in celebration of the marriage of one of his thanes, Tovi the Proud, former standard-bearer to his father Canute, to Gytha, the daughter of Osgod Clapa. Amid the revelries, Hardicanute suffered a seizure and fell to the ground. He had consumed large quantities of alcohol, whilst drinking to the health of the bride-

'he died as he stood at his drink, and he suddenly fell to the earth with an awful convulsion; and those who were close by took hold of him, and he spoke no word afterwards.'

He died a few days later on 8th June 1042, the most likely cause of death was a stroke, 'brought about by an excessive intake of alcohol'. Stoke, cardiac arrest, tuberculosis or poisoning have all been suggested as the cause of death. There was a pattern of sudden deaths among descendants of the House of Normandy, the family of Hardicanute's mother. In 1027, his cousin Richard III of Normandy died of no apparent reason, similarly, poisoning was suggested, said to have been administered on the orders of his brother Robert, who succeeded him as duke. Robert I, himself died suddenly in Nicaea in 1035, on return from a pilgrimage to Jerusalem. In 1040, their cousin Alan III, Duke of Brittany died of unexplained causes, as did his son Conan II, Duke of Brittany, poison was suspected in these cases also.

Hardicanute was succeeded by his Saxon half-brother, Edward, later to become known as Edward the Confessor and the old Saxon line was restored. He was buried at Winchester Cathedral near to his father.

Harald I Harefoot PreviousNext The Vikings