The Tower in the Stuart Era

Prisoners in the reign of James I

The interrogations of the notorious Gunpowder Plot prisoners took place at the Tower of London in 1605. Guy Fawkes, a Catholic Yorkshire man, headed a plot to blow up King James I, and the Houses of Parliament. Fawkes rented a cellar beneath the Parliament buildings, where he and his co-conspirators stored barrels of Gunpowder concealed under piles of wood. He was to ignite the gunpowder on November 5th, 1604.

Their well-laid plans went awry when one of the conspirators decided to warn a Catholic friend, Lord Monteagle, due to a sit in the House of Lords on the appointed day, not to attend. Alarmed, Monteagle took the unsigned letter to Lord Salisbury, the Secretary of State. He arranged a search of the cellars and Fawkes was arrested on the spot with both matches and touchwood in his possession.

Fawkes admitted his guilt but refused to name any of his co-conspirators. He was removed to the White Tower, where he was placed in the dreaded dungeon of Little Ease, beneath the Chapel of St. John. This chamber measures only four feet square and kept any occupant constantly on his feet. Fawkes was tortured terribly to extract a confession from him.

Replicas of many of the gruesome instruments of torture regularly used at the Tower are now on display to the public in the dungeons, including the rack, the scavenger's daughter and the manacles. 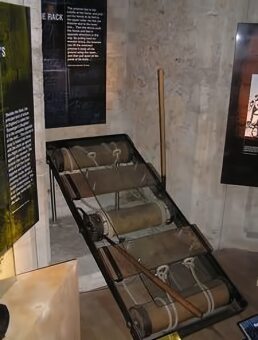 Touch screen exhibits allow visitors to discover more about the instruments themselves and some of their more famous victims.

Five years after the Gunpowder Plot, James I imprisoned his cousin, the ill starred Lady Arbella Stuart, in the Tower. She was the daughter of his uncle, Charles Stuart, Earl of Lennox and Elizabeth Talbot, the daughter of Bess of Hardwick, Countess of Salisbury and therefore stood dangerously close to the throne. The ambitious Bess of Hardwick had long cherished ambitions for his granddaughter, hoping she would one day succeed Elizabeth I.

James had welcomed his young orphaned cousin to court when he first became King of England, but due to her place in the line of succession, was not in a hurry to make arrangements for Arbella's marriage. She was still a single woman at thirty-five when she fell madly in love with a man twelve years her junior, the handsome William Seymour, the son of the Earl of Hertford.

Seymour was the grandson of Edward Seymour, Duke of Somerset, Lord Protector and uncle of the Tudor boy king, Edward VI. He could also claim a royal descent, through Lady Katherine Grey. Katherine was the granddaughter of Henry VIII's sister, Mary Tudor and was herself the younger sister of the unfortunate Lady Jane Grey. James, disliking this "combination of titles", would not give his consent for the couple to marry. They, therefore, were constrained to marry secretly before attempting a romantic flight to Europe. Dressed as a man, Arbella arranged to meet her young husband before their sailing to Calais. When he failed to turn up at the assigned rendezvous point, she sailed to France alone.

Seymour's delay had been occasioned by the fact that James had confined him in the Tower. He made a daring escape disguised as a carter's boy. Arbella was apprehended at Calais harbour, while Seymour reached the safety of Ostend. The luckless Arbella was to spend the rest of her life confined in the Tower. Her imprisonment affected her severely and she began to suffer from delusions. After the failure of a plan to rescue her from captivity, she lost all wish to live. Tragically, Arbella Stuart died in the Tower in 1615.

The renowned Elizabethan seaman and courtier, Sir Walter Raleigh was imprisoned in the notorious Bloody Tower for thirteen years by James I.

Raleigh's desk in the Bloody Tower 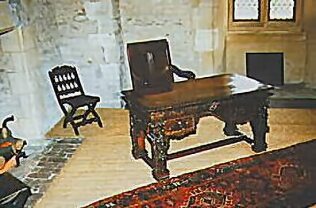 While captive there, Raleigh passed the time by writing his History of the World, which was published in 1614, four years before he was beheaded.

The Duke of Monmouth

James Scott, Duke of Monmouth, the strikingly handsome illegitimate son of Charles II, was destined to spend two spells of confinement in the Tower of London. His Welsh mother, Lucy Walter, the infamous mistress of Charles II, visited England with the young James during the Commonwealth period when he was about seven years old. She foolishly broadcast the fact that James was the son of the exiled Charles Stuart, which resulted in Cromwell incarcerating her and her child in the Tower.

Raleigh's bed in the bloody Tower 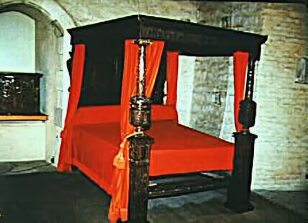 At the Restoration, Charles II had made much of his eldest son, marrying him to a wealthy heiress, in whose right he obtained his estates and Dukedom. Monmouth, however, was ambitious and had his sights set higher, on the crown itself. He claimed that his father had actually been married to his mother, which was publicly denied by Charles. He involved himself in the Rye House Plot, an attempt to kill his father, the King and James, Duke of York, the legitimate heir to the throne, for which Charles II banished his favourite son for life. They were never to meet again.

On the accession of the Catholic King James II, Monmouth returned from Holland to lead a Protestant rebellion against him. His army was defeated at Sedgemoor and Monmouth captured hiding in a ditch in the New Forest. He was attainted for treason and committed to the Tower.

Monmouth wrote pleadingly to Charles II's queen, the kind-hearted Catherine of Braganza and she generously tried to intercede with her brother-in-law for her stepson's life, but James was adamant and refused to be swayed. Monmouth's execution was hideously bungled. The executioner, Jack Ketch, took five strokes at his neck and even then the head was not completely severed and had to be finished off with a knife. Monmouth was interred, along with many other victims of execution, in the Chapel of St. Peter ad Vincula.

The most daring escape among many to be affected at the Tower of London was that staged by the Jacobite William Maxwell, Lord Nithsdale. Imprisoned in the Devereux Tower for his support for James Francis Edward Stuart, known as the 'Old Pretender' in the Jacobite rebellion of 1715, Nithsdale was placed under sentence of death. His distraught young wife rode to St. James' Palace where she threw herself at the feet of George I, to plead for her husband's life, grasping the skirt of his coat. He remained unmoved but Lady Nithsdale devised a plan to engineer her husband's escape. 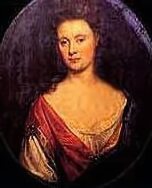 Acquiring the help of a friend, Mrs Morgan and that of her landlady, Mrs Mills, Lady Nithsdale visited her husband the day before his intended execution. The rules allowed only two visitors at a time to enter a cell. Lord Nithsdale quickly put on a dress identical to that worn by Mrs Mills. Lady Nithsdale called out to her friend, loud enough for the guards to hear, to bring her maid, whom she required to carry a last-minute plea for mercy to the King. Mrs Mills was then brought into the cell, suitably distraught and with her face buried in her handkerchief. Lord Nithsdale then donned her hood and was lead out by his wife, also clutching the handkerchief to his eyes.

She then returned to the cell and continued in a long pretended conversation with her husband. On leaving, they bid a compassionate goodbye to the empty cell walls and were escorted weeping from the fortress. Lord Nithsdale reached Rome in safety, where he was later joined by his wife.

The failure of the Jacobite rebellion of 1745, heralded the arrival of more Scottish prisoners at the Tower, including the Scottish lords Balmerino and Lovat, taken prisoner after the Battle of Culloden in 1746. Balmerino was sentenced to death for his part in the uprising. Whilst dining with his wife, he was interrupted by the Lord Lieutenant, loudly declaring the ominous news that the date of his execution had been set. Lady Balmerino, greatly distressed, rose in shock at the reading of the warrant, whereupon her husband reprimanded the Lieutenant with the words: "With your damned warrant you have spoiled my lady's dinner."

At his execution, Balmerino displayed amazing bravery and calmness. He went to his death proudly wearing the blue military coat he had worn at the Battle of Culloden, whilst fighting with the Highlanders for Bonnie Prince Charlie. On the scaffold, he gave a courteous bow to those who had come to morbidly observe the spectacle of his death and carefully read the inscription on his nearby coffin. The executioner, following long-established custom, asked his forgiveness, which he freely gave. The man was visibly upset at his task. Slapping him heartily on the back, Balmerino addressed him as friend and gave him his last three guineas. Placing his coat and waistcoat on top of his coffin, (the victims clothing by ancient tradition, became the property of the executioner), he took off his wig and put on a tartan cap. Stating that he died a good Scotsman, he laid his head on the block. The unnerved and distressed headsman took three chops to sever his head.

Balmerino was followed to the block by his Jacobite comrade, the eighty-year-old Simon Fraser, Lord Lovat, known as the fox, who displayed equal courage in the face of imminent death. As he travelled to his trial, a woman poked her head into his coach, taunting him, "You ugly old dog, don't you think you will have that frightful head cut off?" With a ready repartee he replied, " You damned ugly old bitch, I do believe I shall."

Lovat was to earn the dubious distinction of being the last man to be beheaded in England. An enormous crowd had congregated for the entertainment and one of the crowded spectators' stands overlooking the scaffold collapsed, resulting in the death of several people. As Balmerino had done before him, Lovat examined the inscription on his coffin and clapped the nervous executioner on the shoulder, telling him "Cheer up thy heart man, I am not afraid. Why should you be? "

Tower Hill, the site of many executions, is an elevated spot to the northwest of the Tower of London. The Tower Hill memorial today marks the spot where many famous people met their end.

Among those executed on Tower Hill were:-

Guildford Dudley, husband of Lady Jane Grey, executed by order of Mary I, 1554

Anthony Babington, executed by order of Elizabeth I, 1586

The Tower in the Tudor Era PreviousNext The Bloody Tower