Ivar Ragnarsson or Ivar the Boneless (inn beinlausi) as he was curiously referred to, was a Viking warlord and a man of exceptional cruelty and ferocity, he was the son of Ragnar Lodbrok and Aslaug Sigurdsdottir. Ivar, who ruled over an area covering parts of modern Denmark and Sweden, was reputed to be a berserker, berserkers were Viking warriors who are said to have fought in an uncontrollable, trance-like fury, later giving rise to the English word berserk. The name derived from their reputed habit of wearing a coat (Old Norse- serkr) made from the skin of a bear (Old Norse- ber) in battle. The Viking sagas describe Ivar as- 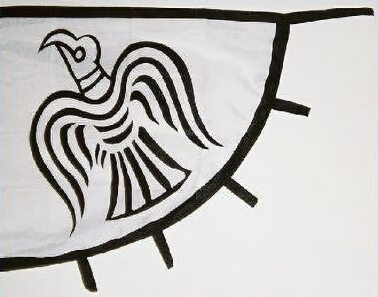 'Only cartilage was where bone should have been, but otherwise, he grew tall and handsome and in wisdom, he was the best of their children.'

It is recorded that his stature was such that he dwarfed all his contemporaries, in battle he was always in the van. His arms were so strong that his bow was more powerful and his arrows heavier than those of his companions. There is much disagreement as to the meaning of Ivar's puzzling epithet 'the Boneless'. It has been suggested it was a euphemism for impotence, It was said that he had "no love lust in him" or even a snake metaphor, his brother Sigurd was known as Snake-in-the-Eye. It may, however, simply have referred to physical flexibility. The poem "Httalykill inn forni" describes Ivar as being "without any bones at all". Norse sources mention Ivar being carried on a shield by his army, leading to speculation that he was lame, this, however, is unlikely considering he was a renowned warrior and other sources from the period mention chieftains being ceremonially borne on the shields of enemies following a victory.

Accompanied by his brothers Halfdan and Ubbe, Ivar crossed the North Sea to England and led what the Anglo-Saxon Chronicle referred to as the Great Heathen Army in the invasion of East Anglia in 865. He unfurled the Viking Raven banner in East Anglia, according to legend, it was woven by three of the daughters of Ragnar Lodbrok. The East Anglians made peace with the invaders and provided them with horses.

The following year, Ivar led his army north and took the city of York, known to the Vikings as Jorvik. Northumbria was at the time in a state of civil war, King Aelle of Northumbria had usurped the throne from Osberht who had ruled Northumbria for the previous eighteen years, however, they agreed to unite against their common enemy, it took 4 months for them to join their forces, and on 21st March 867, they stormed the city walls and gained entry to York in an attempt to relieve it. The Vikings rallied, slaughtered all those who had entered the city and routed those who were outside, both kings Aelle and Osberht were killed. In revenge for the killing of Ivar's father, Ragnar Lodbrok, who was thrown into a snake-pit on Aelle's orders, Aelle was subjected to the agonising death of the blood eagle, a gruesome Viking method of torture and execution which is sometimes mentioned in the Nordic sagas. It was performed by cutting the ribs of the victim by the spine, breaking the ribs so they resembled blood-stained wings, and pulling the lungs out through the wounds in the victim's back. Salt was sprinkled in the wounds. What was left of the Northumbrian court fled north, and Ivar installed Egbert as the puppet king of Northumbria. 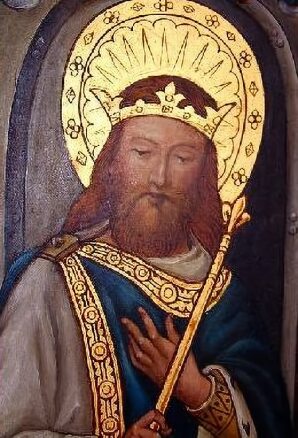 The Great Heathen Army army progressed into Mercia fixing their winter-quarters at Nottingham. Burgred, the King of Mercia, sought aid from Ethelred, King of Wessex and his brother Alfred, who led an army into Mercia and besieged Nottingham, however, the Vikings, heavily outnumbered, refused to fight. Henry of Huntingdon, writing almost 250 years later, described the situation at Nottingham-

'Ingwar [Ivar] then, seeing that the whole force of England was there gathered and that his host was the weaker, and was there shut-in, betook himself to smooth words - cunning fox that he was - and won peace and troth from the English. Then he went back to York, and abode there one year with all cruelty.'

The Mercians settled on paying the Vikings off, who agreed to leave and returned to Northumbria in the Autumn of 868. They spent the winter in York.

They returned to East Anglia and when King Edmund of East Anglia led the resistance against them he was captured and brutally executed at the village of Hoxne. Viking religious beliefs encouraged cruelty towards the followers of the 'White Christ' who they saw as cowards. Edmund bravely refused to become the vassal of a heathen or renounce his religion, declaring that his religion was dearer to him than his life, he was beaten with clubs as he called upon the name of Jesus and was then tied to a tree, where the Vikings shot arrows into him until he died, they then beheaded him. They left Edmund's corpse unburied and his head was thrown into deep brambles. Monasteries were razed to the ground, monks slaughtered and plundering took place on a massive scale.

After 869 Ivar left for Dublin leaving the command of the Great Heathen Army in England to his brothers Halfdan and Ubbe. He is thought to be later identified as Imar, founder of the of Ivar, which at various times ruled Northumbria from York, and dominated the Irish Sea from the Kingdom of Dublin.

Along with Olaf the White, his co-ruler in Dublin, he launched a two-pronged attack on Scotland, they met up at Dumbarton Rock the 'fortress of the Britons', which they besieged. The garrison of the rock held out for four months. They cut off the water supply and having 'Wasted the people who were in it by hunger and thirst', the defenders capitulated after which it was pillaged and destroyed. Ivar and Olaf remained in Strathclyde for the winter, and then returned to Dublin loaded with booty and slaves. The Vikings then exacted tribute from Constantine I, King of Scots.

The Annals of Ulster record Imar as having died in 873. His death is also mentioned in the Annals of Ireland under the year 873. The cause of death said to be 'a sudden and horrible disease' raises the possibility that Ivar's curious nickname of 'the Boneless' was due to the crippling effects of an unidentified disease which was eventually was the cause of his death.

There are theories that he may have suffered from osteogenesis imperfecta or brittle bone disease, which was put forward in 1949 by the Dane Knud Seedorf - 'Of historical personages the author knows of only one of whom we have a vague suspicion that he suffered from osteogenesis imperfecta, namely Ivar the Boneless, eldest son of the Danish legendary king Regnar Lodbrok. He is reported to have had legs as soft as cartilage ('he lacked bones'), so that he was unable to walk and had to be carried about on a shield."

Osteogenesis imperfecta is a dominant congenital skeletal disorder that causes extremely fragile bones and is most frequently caused by a defect in the gene that produces type 1 collagen, an important building block of bone. People with the condition are extremely susceptible to fractures and may have blue sclerae, a bluish tint in the whites of their eyes.

There are known to be less extreme forms of the disease where the affected individual can lack the use of their legs but otherwise be unaffected. In 2003 Nabil Shaban, a disability rights advocate with osteogenesis imperfecta, made the documentary 'The Strangest Viking' for Channel 4's Secret History, in which he explored the possibility that Ivar the Boneless may have had the same condition as himself. This theory is disputed.

The saga 'The Tale of Ragnar Lothbrok' relates that Ivar's condition was the result of a curse. His mother Aslaug, a Norse seer, reportedly had a vision warning that she and Ragnar must wait three nights before consummating their marriage after his return from raiding in England. However, Ragnar failed to heed her warning resulting in Ivar's condition at birth.

Reconstucted face of the Repton warrior 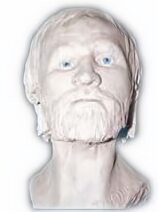 Professor Martin Biddle of Oxford University and his wife Birthe claim that the skeleton of a nine-foot-tall Viking warrior, discovered during excavations at the churchyard of St Wystan's in Repton in southern Derbyshire may be that of Ivar the Boneless. In 873 the Great Army is said to have travelled to Repton, where it took up quarters for the winter. The mass grave at Repton was initially uncovered in 1686 by a labourer named Thomas Walker but the grave was eventually recovered and its existence is forgotten. The Saga of Ragnar Lodbrok itself states that Ivar the Boneless was buried in England.

The body unearthed by Professor Biddle, of a man aged between 35 and 45 must have been that of a very important Viking warlord, as around this burial lay the bones of at least 249 bodies. As well as a sword, he had been buried with a small Thor's hammer and a boar's tusk.

Examination of the bones revealed the warrior died a savage and brutal death. Two wounds on his skull were probably made by a spear and marks on the spine suggest the warrior was disembowelled after death. A violent blow to the top of the thigh could have removed his genitals, perhaps the reason why the boar's tusk was discovered between the legs of the skeleton, an attempt by those who buried him to make his body whole before his journey to Valhalla. Viking beliefs stipulated that a body could not enter Valhalla if it was not whole. According to Dr Bob Stoddart, of Manchester University, the man was stabbed in the head, jaw, arm and thigh and disembowelled. Each of his toes and both his heels were split lengthways. Birthe Biddle claims the man would have been killed in a revenge attack following the destruction of the church and adjoining monastery.

They have argued a highly convincing case for their controversial theory, which contradicts the theory that Ivar was a sufferer of osteogenesis imperfecta. There is a dispute among academics regarding this identification.

Ivar is portrayed by the actor Alex Hogh Anderson in the popular historical fantasy series 'Vikings'.