Edward the Confessor, the son of Ethelred the Redeless and Emma of Normandy, was born at Islip in 1004. He was of medium height and was said by some chroniclers to be an albino. He is described as "most comely" and was of a medium stature, his hair distinguished by a milky whiteness. 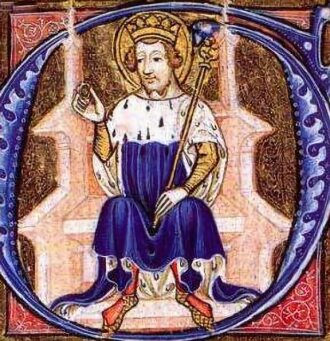 Edward had accompanied his father into exile in Normandy in 1016. Brought up in Normandy from the age of twelve, he had acquired the tastes and outlook of a Norman and was extremely fond of his Norman relations including his cousin William, the future Conqueror. His Danish half-brother, Hardicanute, the son of his mother's second marriage to King Canute, invited Edward to England and made him welcome at his court.

Edward succeeded to the English throne in 1042, on the death of Hardicanute. He appointed a Norman, Robert of Jumieges as Archbishop of Canterbury, an action which was unpopular with the Saxon people. His mother, Emma, returned to England, but found her son's attitude to her cold and reserved. Edward resented her second marriage to his father's rival, King Canute, and Emma's preference for her children by Canute over himself and his brother, Alfred the Atheling widened the family rift to a gaping gulf. Queen Emma died on 6 March, 1052.

He married Edith of Wessex, the daughter of Godwine, Earl of Wessex, whom he found all powerful on his accession to the throne. He was said to have secretly detested Godwine for his part in the murder of his brother Alfred. The new King was extremely pious and devout and had longings for a monastic life.

Edward the Confessor in stained glass

Edward's sister, Goda, was the wife of a powerful Norman nobleman, Eustace, Count of Boulogne, who visited his brother-in-law in England. While staying at Dover, Eustace and his retainers greatly offended the citizens of the town by taking free lodgings. A scuffle developed, in which an Englishman was wounded, he, acting in self-defence, killed one of the Normans. His house was promptly surrounded by Eustace and his men and the Saxon was murdered along with several other inhabitants of the town. The men of Dover then drove the Norman intruders out of the town.

Eustace complained to King Edward about the affair, who believed his version of the tale against that of his subjects and instructed Earl Godwine to punish the town. Godwine refused to obey the order, a popular decision with the people. Godwine and his sons Harold and Sweyn gathered an army and demanded that Eustace and his Norman retainers be surrendered to their vengeance. The northern Earls supported the King, along with the half-Norman Ralph the Timid, Earl of Worcester ( Edward's nephew through Goda's first marriage)

A truce was negotiated by the opposing sides in the quarrel. At a subsequent meeting of the Witan, Godwine's unruly son, Sweyn was outlawed and Godwine and Harold summoned to appear before the assembly. They refused without first obtaining a promise of safe-conduct, which was denied to them. The sentence of banishment was passed against Godwine and Harold. Edward then seized the opportunity to be rid of his Queen, Godwine's daughter, Edith, whom he deprived of all her jewellery and consigned to a convent.

Godwine and Harold returned in force and gained much support, they demanded the King restore their confiscated estates, after initial prevarication, Edward, eager to prevent civil war, agreed to a compromise, all the Normans were outlawed and Edward was obliged to restore the estates of Godwine and his sons and take back his ill used Queen.

Edward's resentment of Earl Godwine remained very strong and a burning sense of the injustice of his brother Alfred's death smouldered within him. During a banquet at Windsor, Edward ventured the opinion that he was convinced that Godwine was guilty of being involved in the murder. Godwine protested his innocence and swore that if he was guilty "May this morsel of bread be my last," whereupon, we are told, he choked on the bread. Whatever the cause, it could have been a stroke, Godwine died on 15th April 1053 and his eldest son Harold succeeded to his estates and influence, which, already considerable, steadily increased.

Coin of Edward the Confessor 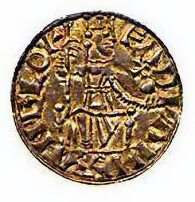 APPOINTMENT OF AN HEIR

King Edward recalled his nephew, Edward the Exile, the son of his half-brother Edmund Ironside, to England, intending to name him his heir. Edward returned with his family from Hungary, his recall was a popular move among the Saxons, but shortly after his return to England, Edward died and was buried at old St. Paul's Cathedral.

Being unlikely to produce children of his own, King Edward is purported to have then made a promise to his cousin, William, Duke of Normandy, that he should succeed him, during a visit of the latter to England.

Edward is most famous for having founded the Abbey of St. Peter on Thorney Island, named due to the brambles that then covered the area, in the misty low lying marshes that then edged the River Thames, otherwise known as the West Minster, to distinguish it from the other Cathedral within the city, St. Paul's. Several churches, dedicated to St. Peter had previously been built on the spot. Edward delighted in the project and considered its creation to be his greatest achievement.

THE DEATH OF EDWARD THE CONFESSOR

In November, 1065, King Edward fell sick of what was described at the time as "a malady of the brain", which was possibly a stroke or a brain haemorrhage. He seemed at first to be making a recovery, but on Christmas Eve suffered another seizure. He was far too ill even to attend the consecration of Westminster Abbey on 28th December, the conclusion of his life's work, although Queen Edith was present. The King drifted into a coma, which was interrupted by periods of delirium. He was said to have recommended his kingdom to the protection of Harold. Edward the Confessor died on the stormy night of 4th -5th January, in the momentous year of 1066.

THE TOMB OF EDWARD THE CONFESSOR

The King was buried at the newly completed Westminster Abbey and his posthumous reputation came to be revered. His remains were not, however, allowed to rest in peace and were exhumed many times in the proceeding centuries. Henry I and his half-Saxon Queen, Edith or Matilda, had her great uncle, the Confessor's tomb opened in 1098. The corpse was duly reported to be uncorrupted, at the time considered to be sure evidence of saintliness. Bishop Gundulf, who was present at the time, was said to have plucked a hair from Edward's long white beard, for which he received a severe reprimand from the Abbot of Westminster.

The tomb of Edward the Confessor at Westminster Abbey 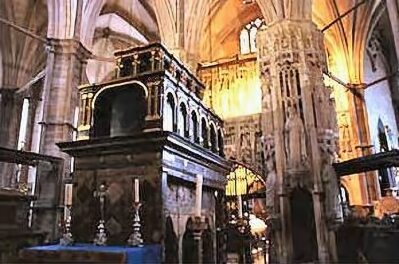 Edward's coffin was once again opened by Henry II, during this second exhumation, the King's burial robes were removed and the pilgrim's ring he was found to be wearing was appropriated by Henry II. Edward was canonized in 1161. When his fervent admirer, Henry III, rebuilt the Abbey in the thirteenth century, the Confessor's body was translated to a magnificent shrine which became the centrepiece of the new building. Henry III himself helped to carry the coffin to its splendid new resting place.

It was to become a popular place of pilgrimage throughout the middle ages. The shrine was desecrated by Henry VIII at the Dissolution of the Monasteries but restored in the reign of his devout Catholic daughter, Mary I. The last disturbance of the King's rest occurred in 1685, where workmen were engaged in the removal of scaffolding used in the coronation of James II. A rafter fell, crashing into Edward's coffin. A crucifix and chain were discovered under his shoulder bones and were given to James II. During James' hasty flight from England in 1688, they were stolen by fishermen.

The Shrine of Edward the Confessor

St. Edward's Sapphire, the most ancient gemstone in the crown jewels, was once worn in a ring by Edward the Confessor, first recorded in the year 1042 when it was set into Edward's coronation ring. It was buried with him in 1066 but in 1101 his shrine was opened, the ring was removed and the Sapphire was re-set in a crown worn by Henry I. It was then re-cut into its present form for Charles II and Queen Victoria later had it set into the cross of the Imperial State Crown, part of the British Crown Jewels.

According to legend, King Edward who had great respect for John the Evangelist and was noted for his generosity towards his poorer subjects was approached by a beggar one day whilst on his way to Westminster Abbey. After searching his pockets for some money, the King found them to be empty so he slipped the Sapphire ring off his finger and gave it to the beggar. Many years later, two pilgrims from the Holy Land returned it to the king saying they had met St John the Evangelist who told them he had been given the ring by the king many years earlier whilst disguised as a beggar. He congratulated Edward for his kindness and said he would see him in heaven in six months. Exactly six months later the king died.

The sapphire is a rose cut blue gemstone of unknown weight, with exceptional colour and brilliance. It is set in a Maltese cross at the top of the crown.