Norse mythology stated that at the centre of Asgard, home of the gods, stood Ygdrassil, the cosmological tree of life, an eternal Ash tree. The branches of Ygdrassil stretched out over all of the nine worlds, and extended up and above the heavens. Yggdrasil was carried by three enormous roots.

The first root from Yggdrasil went to Asgard, the home of the gods. By this root was a well named Urd's well, where the gods held daily meetings. The second went down to Jotunheim, the land of the giants, by this root was Mimir's well, the third root went down to Niflheim, close to the well Hvergelmir. It was here the dragon Nidhug gnawed on one of Yggdrasils roots. 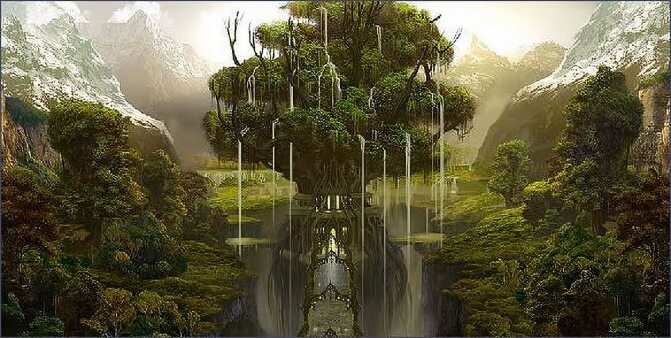 At the top of Yggdrasil, the Vikings believed, lived an eagle, which was the bitter enemy of the dragon Nidhug. A squirrel named Ratatosk, spent its time running up and down the tree attempting to fan the hatred between the eagle and Nidhug. Each time Nidhug cursed the eagle, Ratatosk would hasten to the top of the tree, to inform it, keeping them a constant foes.

Bifröst was a burning rainbow bridge that spans the gap between Midgard (the world) and Asgard, the realm of the gods.

Odin, or Woden, as he was known to the Anglo-Saxons, was the chief god in Norse mythology, One-eyed, wolf and raven-flanked, with spear in hand, Odin pursued knowledge throughout the worlds. Odin ruled at Valhalla, where half of those slain in battle would be carried by the valkyries. 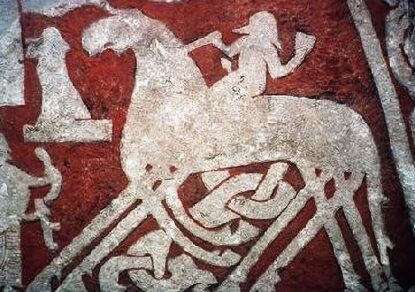 Considered the wisest of the Viking gods Odin sought knowledge far, even to his arch enemies the giants. A lot of his knowledge comes from the giant Mimir. According to Viking myth, he visited Mimir to drink from the fountain of Mimir to gain supreme knowledge. Mimir, however, wouldn't allow him to drink unless he sacrificed one of his eyes. From then on Odin had but one eye. He was the father of Thor, Baldr, Hoder, Tyr, Bragi, Heimdall, Ull, Vidar, Hermod and Vali. His wives were Fjorgyn, Freya and Rind.

The Triple Horn of Odin is a stylized emblem of Odin, the horns figure in the mythological stories of Odin and where recalled in traditional Norse toasting rituals.

Freya was the wife of Odin, the goddess of beauty, love and fecundity, and is the leader of the Valkyries. Her brother Frey was the god of fertility. Friday is derived from the Old English frigedæg meaning 'Freya's day'

Baldr, god of light and joy, was the son of Odin and Freya and was loved by both gods and men. Because Baldr received an omen of his death in a dream, his mother Frigga extracted an oath from every creature, object and force in nature that they would never harm Balder. All agreed that none of their kind would ever do so. Considering him thereafter invulnerable, the gods amused themselves by using him as a target for knife-throwing and archery.

Loki a malicious trickster and shape changer who was related to Odin, and was jealous of Balder. He changed his appearance to an old woman and asked Freya if there was absolutely nothing that could harm Baldr. Freya, unsuspecting, replied that there was just one thing- mistletoe. Loki immediately obtained some mistletoe and tricked Baldr's blind twin brother Hod into throwing a mistletoe dart at him. Hod threw the fig, guided by the aim of Loki and Baldr was killed. While the gods mourned the death of Baldr, Odin sent his other son Hermod to Hel, the goddess of death, to plead for his return. Hel agreed to send Balder back to the land of the living on the condition that everything in the world, dead or alive, must weep for him. And everything wept, except for Loki, who had disguised himself as the witch Thokk. And so Balder had to remain in the underworld. The others took the body of Baldr and placed him on a funeral pyre aboard his ship Ringhorn, the pyre was set alight and the ship sent to sea by the giantess Hyrrokin. 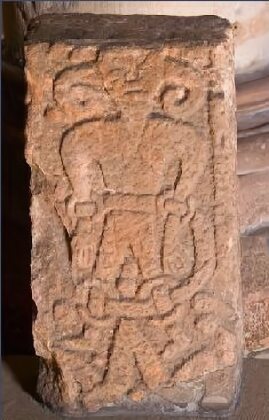 Thor, god of thunder, lightning and storms was the son of Odin and Fjorgyn, was prayed by the Viking before they embarked on voyages, even after becoming Christians. Thor's battle chariot was said to be drawn by two goats. Thor wields the mountain-crushing hammer, Mjölnir, wears the belt Megingjörð and the iron gloves Járngreipr, and owns the staff Gríðarvölr. Thor's exploits, including the relentless slaughter of his foes and fierce battles with the monstrous serpent Jörmungandr-and their foretold mutual deaths during the events of Ragnarök, are recorded throughout Norse mythology. The day of the week Thursday bears his name, 'Thor's day', in Old English Thunresdaeg.

Tyr in Old English Tiu, a one-handed god and one of the oldest gods of the Norse peoples. Tyr was associated with justice and the formalities of war, especially treaties. A guarantor of contracts and a guardian of oaths, as a guarantee of good faith, Norse mythology states he placed his hand between the jaws of the monstrous wolf Fenrir while the gods, pretending sport but intending a trap, bound the wolf. When Fenrir realized he had been tricked he bit off Tyr's hand. The day Tuesday derives from Týsdagr.

Sif was the wife of Thor who bore Ull, the son of Odin and god of winter. The Vikings admired golden hair, and Sif was extremely proud of hers, Loki is said to have cut it all off while she slept.

Hel, the daughter of Loki and Angrboda, ruled over Niflheim, the land of the dead. Hel and her ghostly army were going to support the other gods at Ragnarok, after which her domain would end in flames.

Heimdallr possessed the resounding horn Gjallarhorn, rides the golden-maned horse Gulltoppr, has gold teeth, and is the son of Nine Mothers. Heimdallr is attested as possessing foreknowledge, keen eyesight and hearing and was described as "the whitest of the gods", and keeps watch for the onset of Ragnarök while drinking fine mead in his dwelling Himinbjörg, which is situated where the burning rainbow bridge Bifröst meets Asgard.

The Valkyries were warlike virgins who, mounted on horses and armed with helmets and spears, decided who would perish in battle. They would hover over the battlefield, like birds over their prey. and select half of those who died in battle to carry them to Odin's hall of Valhalla.

Ragnarok, the twilight of the gods, was a series of future events, including a great battle to end all battles, foretold to result in the death of several of the gods, including Odin, Thor, Týr, Frigga, Heimdallr, and Loki, the occurrence of natural disasters, and the subsequent submersion of the world in water. After which the world would resurface anew and fertile, the surviving and returning gods will meet, and the world will be repopulated by two human survivors.

Ragnarok is depicted on the Ledberg stone at Östergötland in Sweden, the stone features a figure with his foot at the mouth of a four-legged beast that is above a legless, helmeted man, with his arms in a prostrate position, considered to be Odin being devoured by the monstrous wolf Fenrir at Ragnarok. Thorwald's Cross at the Isle of Mann depicts similar scenes.