The White Tower is the oldest part of the Tower of London complex, it was built by William the Conqueror between 1078 - 1097. A rectangular stone keep of Caen stone, designed as an impregnable fortress and as an impressive and awesome demonstration of his power to the Londoners. With ramparts which were fifteen feet thick at the base and walls soaring ninety feet high, the dominating shadow of the Tower loomed forebodingly over the huddled wooden buildings of medieval London, a visible expression of Norman power. 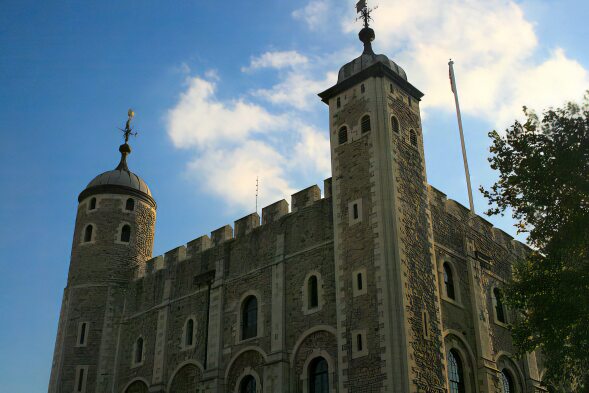 The main building material used in the White Tower's construction is Kentish rag-stone. Although little of it survives to the present day, Caen stone was imported from northern France to provide details in the Tower's facing, much of this was replaced by Portland stone in the seventeenth and eighteenth centuries under the direction of architect Inigo Jones. Most of the Tower's windows were enlarged in the eighteenth century and only two original examples now remain, in the south wall at gallery level.

The Norman Chapel of St.John 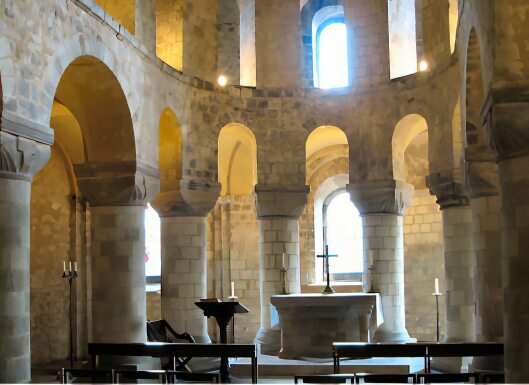 The beautiful but austere Romanesque Chapel of St John is situated on the second floor of the White Tower and is one of the finest surviving examples of Norman church architecture. 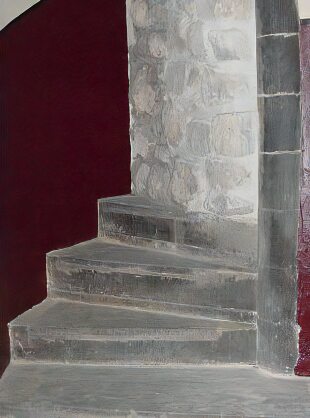 The Chapel measures 55 feet 6 inches long by 31 feet wide, and 32 feet high, and is vaulted with a plain arch. There are four massive columns on either side and four in the apse. Thick, round piers support unmoulded arches, notable for their simplicity, with simple carvings of scallop and leaf designs providing the only decoration. The south aisle communicated with the palace, and an upper aisle, or gallery, similarly opened into the State Apartments.

Medieval Fireplace in the White Tower 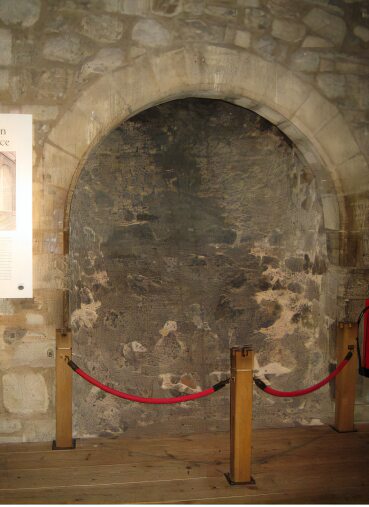 The chapel was built for William the Conqueror but he died before its completion. It was first used by his son William II. King Henry III added stained glass windows depicting the Virgin Mary and the Holy Trinity in around 1240. The chapel was also provided with such ornamentation as a gold-painted cross in Henry's reign. The Chapel of St. John's 'current bare and unadorned appearance is reminiscent of how it would have looked in the Norman era.

On the same floor as the chapel are great rooms. One of these contains a Norman fireplace, quite rare in Britain. The fireplace vented through holes in the side of the wall. Originally there was a projecting hood to keep the smoke out of the room.

Ranulf Flambard, Bishop of Durham and a minister of William II, was imprisoned in the White Tower by King Henry I on 15th August 1100. At Candlemass, on the 2nd of February 1101, the bishop affected a daring escape, descending from his window using a rope that his friends had smuggled into him inside a vessel of wine. Flambard was not recaptured and made his escape to Normandy.

In 1255, during the reign of Henry III, several Jews were imprisoned in the White Tower, awaiting execution for the alleged murder of Hugh of Lincoln. Eighteen of these were hanged. In 1270, anti-semitic feeling in England grew, culminating in a decree by King Edward I that the Jews were a threat to the country, all Jews were required to wear a yellow star to identify them in public. Other prisoners housed in the White Tower include John the Good, King of France, captured by Edward, the Black Prince in 1360, and Charles, Duke of Orleans who was captured at the Battle of Agincourt and imprisoned in 1415.

In the reign of William the Conqueror's descendant Edward III (1327 - 1377) the 'Great Tower' began to assume its modern name of the White Tower due to the continuous practice of applying whitewash to its walls. Edward's grandson Richard II signed his abdication statement at the White Tower on 30 September 1399. 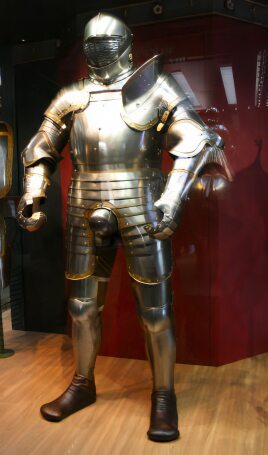 Gun emplacements were improvised during the reign of Henry VIII. The roof of the White Tower needed to be strengthened to take the weight of cannon. In 1530 the White Tower's most famous features, the onion-shaped domes on the turrets were installed.

In 1674 the skeletons of two children were discovered in the White Tower, during the demolition of a staircase leading to the chapel of St. John, they were contained in a wooden box 10 feet below ground. These bones were believed to be the remains of the Princes in the Tower, Edward V and his younger brother Richard, Duke of York.

At the command of Charles II they were later interred in the Henry VII Chapel at Westminster Abbey 4 years later. A monument designed by Sir Christopher Wren now marks the putative resting-place of the princes.

The Royal Armouries, Tower of London 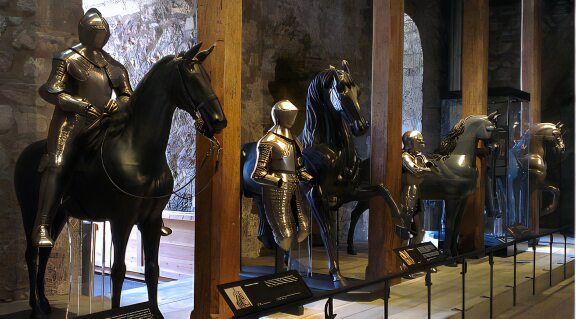 Due to historical controversy which continued to surround the matter of the fate of the Princes in the Tower, George V permitted the exhumation of these bones in 1933. An examination was conducted on the bones by Lawrence Tanner MD, OBE, the Abbey archivist, Professor William Wright, President of the Anatomical Society of Great Britain and Dr George Northcroft, then president of the Dental Association.

Professor Wright concluded that on the evidence of the ossification development of the bones of the vertebrae, he believed these were the bones of two children, the eldest aged twelve to thirteen and the younger nine to eleven. The Tanner and Wright report and accompanying photographs of the bones have been subject to expert scrutiny on many occasions since then. Modern conclusions vary.

The Royal Armouries, Britain's oldest national museum, is located on the lower floor of the White Tower, it features arms and royal armour, life-sized wooden horses and figures of kings. The huge armour of King Henry VIII is displayed, alongside the armours of King Charles I and King James II. Highlights of 'the Line of Kings' exhibition include wooden horses, many about 325 years old. Near the horses are the unique wooden heads of the monarchs.