The larger than life figure of Siward, earl of Northumbria first appears on the pages of history in the year 1033, when he stood as a witness in a charter by King Canute for Archbishop Ælfric of York.

Siward is generally considered to be of Danish stock, the 'Vita Ædwardi Regis', which was compiled by an anonymous author circa 1067 and commissioned by Queen Edith, the widow of King Edward the Confessor, records that Siward's nickname was 'Digri', or 'Digara', deriving from the Danish Digger meaning 'the Stout', or 'the Strong'. The biography of Siward's son Waltheof, states that Siward was the son of a Scandinavian earl named Bjorn. A legend preserved in the twelfth century claims that Bjorn was descended from the union of a lady and a white bear. 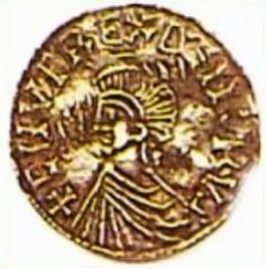 Siward grew to be a powerful figure in the north of England during the reign of King Canute the Great, a formidable Viking warrior who conquered England and made himself king in the first decade of the eleventh century. Siward was one of many Danes arrived in England in the wake of Canute's conquest of the country, although the date and context of his arrival in England are not known.

He succeeded Erik of Hlathir, earl of Northumbria, as ruler of southern Northumbria between 1023 and 1033. Siward then entrenched his position in northern England by marrying Ælfflæd, the daughter of Ealdred, Earl of Bamburgh and granddaughter of Uhtred the Bold. After slaying Ealdred's successor Eadulf in 1041, Siward acquired control of all of Northumbria. He was delegated authority in England by the king while Canute was otherwise occupied in his Scandinavian territories.

On the death of Canute in 1035, the throne was seized by his illegitimate son Harold Harefoot. Canute's legitimate son Hardicanute was in Denmark at the time of his father's death, his involvement in a war against King Magnus I of Norway resulted in his not being able to secure his claim to the throne of England. As Hardicanute was preparing for an invasion of England, Harold died in 1040 and was succeeded by his brother. Hardicanute's first act on arriving in his new kingdom was to have his half-brother Harold's body disinterred, beheaded and slung into a marsh, causing outrage amongst churchmen. Siward appears as 'Sywardus Comes' in 1038, as a witness to a charter of King Hardicanute to the Abbey of Bury St Edmunds. He further witnessed a confirmation granted by Harthacnut to Fécamp Abbey, between 1040 and 1042. Hardicanute reigned in England for but two years dying in 1042, like his half-brother, he met his end in the throes of a fit, incurred during a riotous drinking bout at Clapham.

Hardicanute was succeeded by Saxon half-brother Edward the Confessor. Siward was to become one of the Confessor's most powerful supporters. On 16 November 1043, Siward, Godwine Earl of Wessex and Leofric Earl of Mercia, aided the king against his mother, Emma of Normandy. 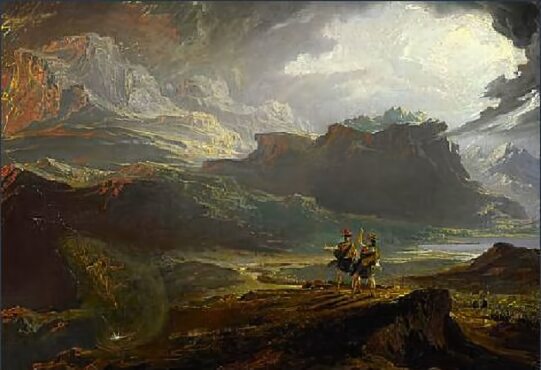 Edward's attitude to Emma was cold and reserved. He resented her second marriage to his father's rival, King Canute, and Emma's preference for her children by Canute over himself and his brother, Alfred. Edward complained that his mother had "done less for him than he wanted before he became king, and also afterwards". He confiscated her considerable wealth and then went on to accuse his mother of treason, it was claimed that Emma had incited King Magnus of Norway to attack England.

Along with Earl Leofric and Ralph the Timid, Earl of Hereford, Siward assisted the king to combat a rebellion by the powerful Earl Godwine and his sons in 1051 which resulted in the exile of Godwine. Godwine returned to England in 1052. Siward further extended his influence in the south, bringing the shire of Northampton under his control in the 1040s and Huntingdon in the 1050s.

In 1039 or 1040, the Scottish king Duncan I invaded Northumbria and lay siege to the town of Durham. Within a year, he was killed by King Macbeth, who after defeating him in battle, succeeded to the throne of Scotland. The elder of Duncan's sons, Malcolm, enlisted the aid of Edward the Confessor. The twelfth-century Annals of Lindisfarne and Durham, record that in the year 1046 -

Earl Siward with a great army came to Scotland, and expelled king Mac Bethad, and appointed another, but after his departure Mac Bethad recovered his kingdom'

Siward met Macbeth in battle to the north of the Firth of Forth, the battle is variously referred to as the "Battle of the Seven Sleepers" or the "Battle of Dunsinane", although the earliest reference to Dunsinane as the location occurs in the early fifteenth century by Andrew of Wyntoun. The earliest contemporary English account of the battle is recorded in the Anglo-Saxon Chronicle. The battle, in which the Annals of Ulster report 3,000 Scots and 1,500 English died, was fierce and bloody, Siward's eldest son, Osbjorn and his son-in-law were among the dead. 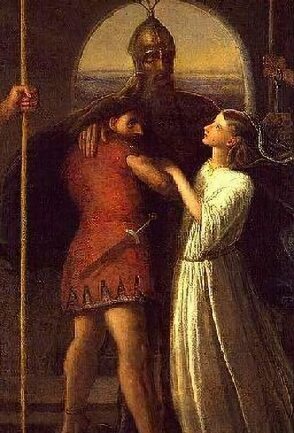 "Around this time Siward, the mighty earl of Northumbria, almost a giant in stature, very strong mentally and physically, sent his son to conquer Scotland. When they came back and reported to his father that he had been killed in battle, he asked 'Did he receive his fatal wound in the front or the back of his body?' The messengers said 'In the front'. Then he said, 'That makes me very happy, for I consider no other death worthy for me or my son'. Then Siward set out for Scotland, and defeated the king in battle, destroyed the whole realm, and having destroyed it, subjected it to himself" -the Historia Anglorum of Henry of Huntingdon.

The great warrior Earl Siward, reported by contemporaries to be a giant of a man in stature, died not in battle, but much to his disdain, in his bed, of dysentery in 1055, during which he bemoaned the fact that instead of dying in one of the many battles he had fought in, he was forced to die like a cow. He insisted on being dressed in his battle armour, with a helmet on his head and axe and shield in hand so he could end his days like a warrior and thus attired went to meet his maker.

'Siward, the stalwart earl, being stricken by dysentery, felt that death was near, and said, "How shameful it is that I, who could not die in so many battles, should have been saved for the ignominious death of a cow! At least clothe me in my impenetrable breastplate, gird me with my sword, place my helmet on my head, my shield in my left hand, my gilded battle-axe in my right, that I, the bravest of soldiers, may die like a soldier." He spoke, and armed as he had requested, he gave up his spirit with honour' The Historia Anglorum, Henry of Huntingdon.

The Vita Ædwardi Regis records that Siward died at York and was buried in "the monastery of St Olaf" at Galmanho, which is confirmed by the Anglo-Saxon Chronicle, John of Worcester, and the Historia Regum.

One of Siward's sons is known to have survived him, Waltheof, whose mother was Ælfflæd. As Waltheof was at the time of his father's death still a young child, King Edward the Confessor appointed Tostig Godwineson, the unruly brother of Harold Godwineson (the future Harold II) as Earl of Northumbria. Waltheof later however became Earl of Northumbria, destined to become the last of the Anglo-Saxon earls, he joined a rebellion against William the Conqueror and was betrayed by his wife Judith of Lens and executed in May 1076.

Waltheof's daughter, Maud of Huntingdon married David I, King of the Scots, the son of Malcolm Canmore and through this marriage Siward was to become the ancestor of later Scottish and English monarchs.