During the reign of his father Alfred the Great, Edward the Elder had taken an active role in his campaigns against the Vikings. On the great Alfred's death, the succession was disputed between Edward or Eadweard and Ethelwald, the son of Alfred's elder brother Ethelred I. The Witan elected Edward as King. Coin of Edward the Elder 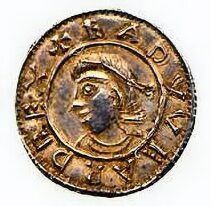 Ethelwald reacted by seizing the crown estates at Wimborne and Christchurch. Edward was quick to respond to the threat, but his cousin escaped and sought refuge with the Vikings of Northumbria. He returned in 905 at the head of an army, the battle ensued at Holme in Essex, during which Æthelwold himself was killed, but the Danes eventually emerged the victors. Edward escaped the battlefield unhurt and later negotiated a treaty with his enemies.

The treaty was broken on the arrival of Ragnald in Northumbria, who quickly captured the city of York and occupied the northern kingdom of Bernicia. At the same time, Mercia was yet again invaded, the Danes advancing as far as the Severn. Edward, leading a joint force from Wessex and Mercia, again encountered them in battle at Tettenhall in Staffordshire and on this occasion won a decisive victory.

Along with his sister Aethelflaed, Lady of Mercia, the widow of King Ethelred of Mercia, who was known as the Lady of Mercia, Edward spent most of the early part of his reign engaged in the intermittent conflict with the Vikings. Ethelfleda embarked on a policy of fortifying towns against the Danes. A true daughter of Alfred the Great, she defeated them in battle in Wales, from where they had threatened Mercia's western border. Edward slowly gained ground against the Danes, eventually pushing the boundaries of Wessex and Mercia northwards.

Following his sister's example, the King secured his re-conquests by building strong fortifications to defend them. London and Oxford were turned into strong garrisons to support King Edward's campaign against the Danes.

The British princes, including Howel the Good, Prince of Wales, or Wealas (Anglo-Saxon for foreigner) and Cledauc accepted Edward the Elder as their overlord. In the year 920, the Kings of the North, including Sigtrygg Caech (the squinty), Constantine II, King of Scots and Donald Mac Aedh, King of Strathclyde, met King Edward at Bakewell in Derbyshire, fully recognising his overlordship. 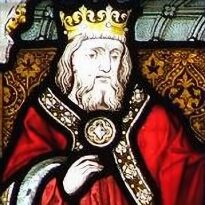 The first mention of Edward's eponym the Elder occurs in the tenth century when it was used in Wulfstan's Life of St Æthelwold, to distinguish him from the later King of the same name, Edward the Martyr.

Unusual for a member of the House of Wessex, Edward does not seem to have been a particularly devout son of the church. On the contrary, the church in Wessex appears to have been neglected in his reign, leading the Pope to deliver a reprimand to the king.

His sister Ethelfleda died in 920 and her daughter and heiress, Elfwina, succeeded to the province, she became known by the title her mother formerly had held, the Lady of Mercia. Elfwina in turn recognised her uncle, Edward, as her overlord. Although Mercia and Wessex remained two separate territories, they were now united under the same ruler.

Edward the Elder died while leading an army to combat a Cambro-Mercian rebellion, on 17 July 924 at Farndon-on-Dee, Mercia, his body was buried at the the New Minster at Winchester, which Edward himself had established. Following the Norman conquest, the minster was replaced by Hyde Abbey and King Edward's body was transferred there. His grave is currently marked by a cross-inscribed stone slab within the outline of the old abbey marked out in a public park. He was succeeded by his eldest son, Athelstan whom he had named as his heir.

The family of Edward the Elder

Edward was married three times, in all begetting 18 children. His first wife, whom he married around 893, was Ecgwynn, a noblewoman. William of Malmesbury, writing in the twelfth century, informs us that her children, including Athelstan, who succeeded his father, were illegitimate, however, this is unlikely as Athelstan ascended to the throne as undisputed King after the death of his father. Their three children were:-

Edward was married secondly, to Elfleda, who was the daughter of Ethelhelm, ealdorman of Wiltshire, this second marriage produced ten children :-

(6) Edflaed, a nun at Wilton Abbey

(8) Elflaeda, a nun at Winchester

Edgifu, daughter of Sigehelm, Ealdorman of Kent, was to become the King's third wife in about 905. They produced a further four children :-

Edward is also reputed to have fathered an illegitimate son, Gregory, Abbot of Einsiedlen.