Æthelflæd, Lady of the Mercians

Æthelflæd has been described as 'our greatest woman general, was born around 864, the eldest daughter of Alfred the Great, King of the Anglo-Saxon kingdom of Wessex, and his queen, Ealhswith. Her mother Ealhswith who was married to King Alfred in 868, was the daughter of Ethelred Mucel, Alderman of the Hwicce, an area which mainly covered modern Herefordshire, by his wife Edinburgh, daughter of Cenwulf, King of Mercia (796-821) who was descended from King Penda`s brother Cenwealh.

Æthelflæd, Lady of the Mercians in stained glass 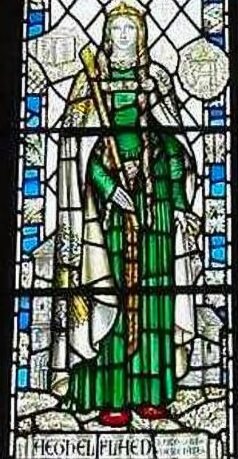 She married her kinsman, Ethelred, Ealdorman of Mercia, who was perhaps the grandson of Ethelred Mucel and Edburgh through their son Ethelwulf, who was her mother Ealhswith`s brother. The Kingdom of Mercia then covered a huge area of the middle England, which name derived from the Old English word 'Mierce' meaning border people.

Mercia consisted of the border areas (modern Staffordshire, Derbyshire, Nottinghamshire, and northern West Midlands and Warwickshire) that lay between the districts of Anglo-Saxon settlement and the Celts or Wealas (meaning foreigners), as the Welsh were known to the Anglo-Saxons, It later covered the Hwicce territory (the rest of West Midlands and Warwickshire, eastern Hereford and Worcester, and Gloucestershire) and spread also into what was later Cheshire, Salop, and western Hereford and Worcester. The kingdom was constantly under attack by the Vikings. 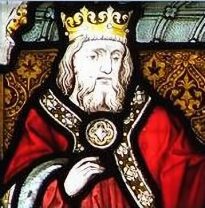 In about 884 she joined her husband in resisting the invasions of the Vikings. Ethelred was killed in battle against the Vikings in 911, whereupon Aethelflaed, after the Battle of Tettenhall, a great victory over the Vikings, became the effective ruler of Mercia the Anglo-Saxon Chronicle styles her as the 'Lady of the Mercians' (Myrcna hlæfdige).

Aethelflaed built the new Saxon 'burh' of Chester. Bonewaldesthorne's Tower, on the Chester city walls, is rumoured to have been so named after an officer in her army. She rebuilt Chester's walls in around 907 A.D. extending them to the edge of the river on the South and Western sides of the old Roman fortress, to establish Chester at the centre of a line of burghs, stretching from Rhuddlan in North Wales to Manchester, to protect the northern frontier of Mercia.

Her brother, Edward the Elder (pictured above), born in around 868, suceeded their father in 924 and Aethelflaed allied herself her brother against the Vikings. She fostered Edward's son, Athelstan and worked towards his eventually gaining the English crown.

Aethelflaed with her nephew, the future King Athelstan 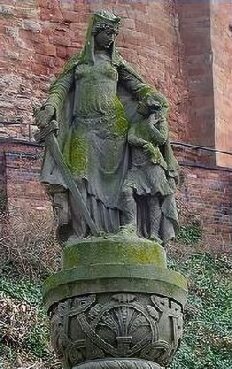 Æthelflæd founded Tamworth Castle, as a burh to defend against the Vikings, a statue dedicated to her, with her young nephew, Athelstan, dating to 1913 - and the 1,000th anniversary of the founding of the castle stands outside. The Anglo-Saxon Chronicle records:-

'913: Here, God granting, Ethelflaed Lady of the Mercians fared with all the Mercians to Tamworth and there built the fortress early in the summer and after this, before Lammas, the one at Stafford'.

Tamworth served as a residence of the Mercian kings, to which Edward took his mistress Egwynna, His two eldest illegitimate children were born there, probably his daughter first, who remained unnamed in the Anglo-Saxon Chronicles, and then his eldest son Aethelstan, who was a great favourite of his grandfather, Alfred the Great, who ennobled him and presented him with a mantle of royal purple, a girdle set with precious stones and a Saxon seax (sword) in a golden scabbard.

Ethelfleda brought up her nephew and his sister at Tamworth. She feared her brother Edward, whom she was not always on the best of terms, would soon marry and Athelstan would be placed in danger if more sons were born to Edward. Fears later materialised when Aethelstan was left out of the succession, and unsuccessful attempts were made on his life. Æthelflæd worked towards her nephew gaining the crown, who was eventually recognised as King of England.

She captured Derby from the Vikings and defeated them at Leicester. She had received an agreement from the citizens of York to take the city and was on her way to York but died suddenly at Tamworth in 918 before the campaign was completed. She was buried beside her husband, Ethelred, at St Peter's Church (now St Oswald's priory) in Gloucester alongside the bones of St Oswald a former Christian king of Northumbria. Her tombstone is now displayed in Gloucester City Museum.

Mercia was inherited by Ethelred and Aethelflaed's daughter, Aelfwynn, born before 903. Aelfwynn submitted to her uncle, King Edward the Elder, who took her captive, after which Mercia was annexed to Wessex and thus Edward solidified his control over most of England.

Aethelflaeda's descendants continued to occupy the English throne. Aelfwynn's daughter, Aethelfleda Eneda married her cousin King Edgar 'the Peaceful', later deserted her and married his mistress Elfrida. Aethelflaeda of Mercia's great-grandson, Edward the Martyr, the son of Aethelflaeda and Edgar was murdered in 978 by his step-mother, Elfrida so that her son by Edgar, known to history as Ethelred the Redeless could ascend the English throne.