Uhtred the Bold was the son of Waltheof I, ealdorman of Bamburgh, whose ancestors had ruled Northumbria from the dramatic coastal castle of Bamburgh. Earl Uhtred of Bebbanburg, also from Northumbria, features in Bernard Cornwell's Saxon Stories. In the stories, Cornwell places Uhtred earlier in history. The historical drama television series 'The Last Kingdom', in which Alexander Dreymon stars as Uhtred, is based on Bernard Cornwell's "The Saxon Stories". The historical Uhtred was ealdorman of Northumbria from 1006 to 1016. 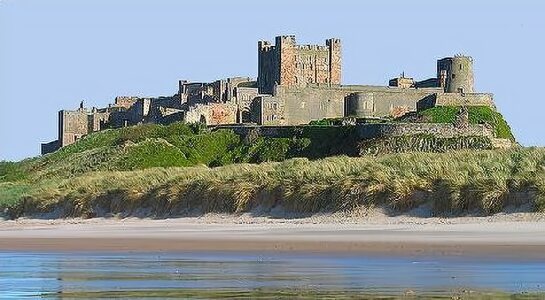 Symeon of Durham, a chronicler and monk at Durham Priory, records that the remains of St Cuthbert, a saint of the early Northumbrian church was transferred from Chester-le-Street to Durham. He relates that Uhtred travelled to Durham with the monks to clear the site of the new cathedral, which was founded by Bishop Aldhun. At around this time, Uhtred married Ecgfrida, Bishop Aldhun's daughter and through this marriage acquired estates that had previously belonged to the church.

In 1006 Malcolm II, King of Scots launched an invasion of Northumbria and laid siege to Durham. The Saxon king, Ethelred II, known as 'the Redeless' and a weak and ineffectual ruler was unable to send aid to his Northumbrian subjects. Uhtred's father, Ealdorman Waltheof was too old and frail to fight and remained at Bamburgh Castle. Uhtred, acting in his father's stead quickly raised an army from Bernicia and Yorkshire and opposed the Scots, winning a decisive victory over King Malcolm's forces. The severed heads of the Scots were fixed on stakes to Durham's walls. King Ethelred rewarded Uhtred by appointing him ealdorman of Bamburgh, though his father still lived.

Ethelred II arranged that the treacherous Edric Streona would murder of ealdorman Ælfhelm of York,

'The crafty and treacherous Eadric Streona, plotting to deceive the noble Ealdorman Ælfhelm, prepared a great feast for him at Shrewsbury at which, when he came as a guest, Eadric greeted him as if he were an intimate friend. But on the third or fourth day of the feast, when an ambush had been prepared, he took him into the wood to hunt. When all were busy with the hunt, one Godwine Porthund (which means the town dog) a Shrewsbury butcher, whom Eadric had dazzled long before with great gifts and many promises so that he might perpetrate the crime, suddenly leapt out from the ambush, and execrably slew the ealdorman Ælfhelm. After a short space of time his sons, Wulfheah and Ufegeat, were blinded, at King Æthelred's command, at Cookham, where he himself was then staying.'

Uhtred thus succeeded Ælfhelm as ealdorman of York and united northern and southern Northumbria under the house of Bamburgh. He then divorced his wife, Ecgfrida, and in an effort to make political allies amongst the Danes in Deira, married Sige, daughter of Styr, son of Ulf. Styr was a rich citizen of York. Two children resulted from this marriage, Eadulf, later Eadulf III, and Gospatric.

King Malcolm, known as 'Forranach' meaning the destroyer, taking advantage of the fact that the English were preoccupied with Viking raids, marched south with Owain the Bald, King of Strathclyde in 1018 or possibly 1016, and together they burnt much of Northumbria. Uhtred’s forces met them in battle at Carham, which took place south of the River Tweed. Symeon of Durham describes the battle:-

“In the year of our Lord’s incarnation ten hundred and eighteen, while Cnut ruled the kingdom of the Angles, a comet appeared for thirty nights to the people of Northumbria, a terrible presage of the calamity by which that province was about to be desolated. For, shortly afterwards, nearly the whole population, from the river Tees to the Tweed, and their borders, were cut off in a conflict in which they were engaged with a countless multitude of Scots at Carrun.”

In 1013 King Sweyn Forkbeard of Denmark invaded England. The Londoners put up a stout resistance, King Ethelred and Thorkell the Tall, a Viking leader who had defected to him, was in the city. Sweyn then proceeded west to Bath, where the western thanes submitted to him. The Londoners fearing awful revenge would be exacted on them if they resisted any further, followed their example and at last submitted. In common with all of the Danes in the north, Uhtred submitted to Sweyn at Gainsborough. Ethelred fled to the Isle of Wight and later joined his wife and children in Normandy, where they had taken refuge with her nephew, Duke Richard. After London had fell to him, Sweyn became King of England by Christmas 1013. England's first Danish King died suddenly of apoplexy, on 3rd February 1014, while threatening the Abbey of Bury St. Edmund's. He had reigned for less than two months.

Ethelred was re-called by the Witan and Uhtred, along with others, transferred his allegiance back to Ethelred, on his return and married Ethelred’s daughter Ælfgifu. In 1016 Uhtred campaigned with Ethelred's son Edmund Ironside, now his brother-in-law, in Cheshire and the surrounding shires. While Uhtred was absent from his lands, Sweyn's son, Canute, invaded Yorkshire. Outnumbered, Uhtred did homage to him as King of England. He was summoned to a meeting with Canute, and en route, he and forty of his men were murdered by Thurbrand the Hold, with the aid of Uhtred's servant, Wighill and with the connivance of King Canute. Uhtred was succeeded in Bernicia by his brother Eadwulf Cudel.

The murder of Uhtred saw the start of an Anglo-Saxon blood feud that continued for generations. Uhtred's son Ealdred eventually avenged his father by killing Thurbrand the Hold, for which Ealdred was killed by Thurbrand's son, Carl. Ealdred's was avenged after the Norman Conquest, when, in the 1070s, Earl Waltheof, (Ealdred’s grandson) had his men kill most of Carl's sons and grandsons. This is but one example of the notorious Northumbrian blood feuds commonly occurred at this time. Waltheof himself was later executed by William the Conqueror.

The family of Uhtred the Bold

Uhtred's descendants continued to rule in Bernicia, Ealdred, Earl of Bamburgh (killed 1038) Uhtred's son from his marriage to Ecgfrida, and Eadulf (killed 1041) his son from his marriage to Sige, and briefly Eadulf's son Osulf held the earldom of northern Northumbria 1067 until he too was killed. Eadulf's brother Gospatric began the Swinton Family dynasty, his son Eadulf Rus famously murdering William Walcher, Bishop of Durham which provoked William the Conqueror into dispatching an army north to harry the region again. Uhtred’s marriage to Ælfgifu produced a daughter, Ealdgyth, who married Maldred, brother of Duncan I of Scotland and who gave birth to a son, Gospatric, who was Earl of Northumbria from 1068 to 1072.