The Anglo-Saxon Chronicle began to be compiled in around 890 A.D., at the command of King Alfred the Great (871- 899) and consists of a series of annals written in the Old English language.

Alfred ordered that copies be made of the original manuscripts and distributed to monasteries across the length and breadth of England, which were to be regularly updated. One particular version of the chronicle was still being actively updated in 1154 and dates to the end of King Stephen's reign.

Page from the Anglo-Saxon Chronicle 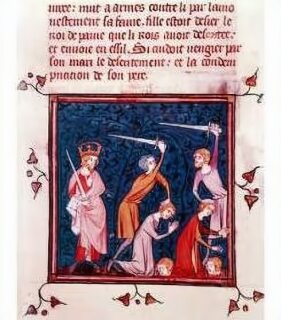 Nine versions of the chronicle have survived to the present day. Of these seven are written entirely in the Anglo-Saxon language. Another version survives in Old English with a translation of each annal into Latin. The other, known as the Peterborough Chronicle is recorded in Old English except for the last entry, which is in early Middle English. Six of these copies are kept at the British Library.

The Chronicle is the oldest history of any European country in a vernacular language. Its early entries are essentially an official history of the Wessex dynasty and it is one of the few literary sources we possess for England's history during the period. Reporting on the reign of King Egbert, it states:-

'The moon darkened on Christmas Eve. That year King Ecgbryht overcame the Mercian kingdom, and all that was south of the Humber. He was the eighth king who was ruler of Britain; the first was Aelle, king of Sussex, who had done this much. The second was Ceawlin, king of Wessex, the third was Aethelbryht, king of Kent, the fourth was Raedwald, king of East Anglia; the fifth was Edwin, king of Northumbria; the sixth, Oswald, who ruled after him; the seventh was Oswald's brother Oswiu. The eighth was Ecgbryht, king of Wessex, and this Ecgbryht led troops to Dore against the Northumbrians. They offered him submission, and a treaty; with that they parted' 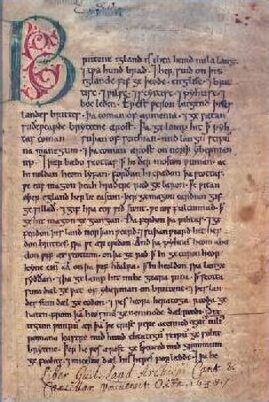 The chronicle records the Battle of Hastings:-

'Then Count William came from Normandy to Pevensey on Michaelmas Eve, and as soon as they were able to move on they built a castle at Hastings. King Harold was informed of this and he assembled a large army and came against him at the hoary apple tree. And William came against him by surprise before his army was drawn up in battle array. But the king nevertheless fought hard against him, with the men who were willing to support him, and there were heavy casualties on both sides. Then King Harold was killed, and Earl Leofwine his brother, and Earl Grythe his brother, and many good men, and the French remained masters of the field...'

The sufferings of the common people during the Civil War of Stephen and Matilda are also vividly described:-

'In the days of this King, there was nothing but strife, evil and robbery, for quickly the great men who were traitors rose against him. When the traitors saw that Stephen was a mild good-humoured man who inflicted no punishment, then they committed all manner of horrible crimes. they had done him homage and sworn oaths of fealty to him, but not one of their oaths was kept. They were all forsworn and their oaths broken. For every great man built him castles and held them against the king; they sorely burdened the unhappy people of the country with forced labour on the castles, and when the castles were built they filled them with devils and wicked men.

By night and by day they seized those they believed to have any wealth, whether they were men or women; and to get their gold or silver, they put them into prison and tortured them with unspeakable tortures, for never were martyrs tortured as they were. They hung them up by the feet and smoked them with foul smoke. They strung them up by the thumbs, or by the head, and hung coats of mail on their feet. They tied knotted cords around their heads and twisted them until it entered the brain. they put them in dungeons wherein were adders and snakes and toads and so destroyed them. Many thousands starved to death. I know not how to, nor am I able to tell of, all the atrocities nor all the cruelties which they wrought upon the unhappy people of this country. It lasted throughout the nineteen years that Stephen was king, and always grew worse and worse. Never did a country endure greater misery, and never did the heathen act more vilely than they did. And so it lasted for nineteen long years while Stephen was King, till the land was all undone and darkened with such deeds and men said openly that Christ and his saints slept.'