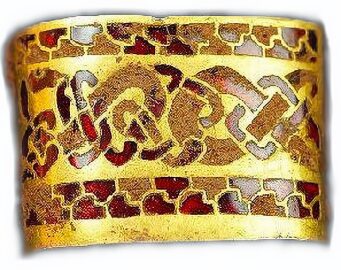 The Gold artefacts, many decorated with intricate garnet inlay, were discovered by Terry Herbert of Burntwood in Staffordshire, using a metal detector, on 5th July 2009, when he was searching an area of recently ploughed farmland near the village of Hammerwich, in Staffordshire.

Over the next five days, enough gold objects were recovered from the soil to fill 244 bags. Herbert contacted Duncan Slarke, the Finds Liaison Officer for the Staffordshire and West Midlands Portable Antiquities Scheme. The landowner Fred Johnson granted permission for an excavation to search for the rest of the hoard.

The subsequent excavation was funded by English Heritage who contracted Birmingham Archaeology to do the fieldwork. Ploughing had scattered the artefacts, so it was decided to excavate an area 9 by 13 metres (30 by 43 feet) Excavations revealed no dating evidence for the hoard, which was found not to be associated with a burial.

Ring from the Staffordshire Hoard 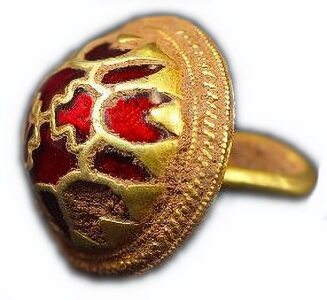 The discovery was announced on 24th September 2009 and attracted worldwide attention. Leslie Webster, former Keeper of the Department of Prehistory & Europe at the British Museum stated 'This is going to alter our perceptions of Anglo-Saxon England in the seventh and early eighth centuries as radically, if not more so, as the 1939 Sutton Hoo discoveries did. Absolutely the metalwork equivalent of finding a new Lindisfarne Gospels or Book of Kells.'

In December 2012 it was announced that 91 additional items of gold and silver metalwork had been found in the field where the Staffordshire Hoard was discovered in 2009. The hoard was discovered very near Watling Street. One of the major thoroughfares of Roman Britain, it ran for about 250 miles from Dover past Wroxeter and was probably still in use when the hoard was buried.

Most of the items in the hoard are military, but it is not possible to say if the hoard was the spoils from a single battle or a long and highly successful military career. The only non-marital items are three crosses. The largest cross is missing some of its decorative settings and may have been an altar or processional cross. The crosses have been folded possibly to fit into a small space before being buried. A pendant cross containing a large garnet, has the top arm detached and the left arm has been bent upwards and deformed. It was probably suspended on a cord or chain and worn by a senior member of the clergy. 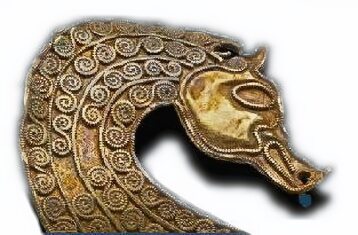 The superb quality of the craftsmanship on many items indicates royal ownership. A small strip of gold is inscribed on both sides with a quotation from the Old Testament in Latin 'Surge Domine et dissipentur inimici tui et fugiant qui oderunt te a facie tua', which translates as: 'Rise up, Lord; may Your enemies be scattered and those who hate You be driven from Your face', and is believed to date to the seventh or early eighth century. The find includes150 sword pommel caps, single pommel caps from this period are incredibly rare finds, curiously, the Beowulf Manuscript actually contains a reference to warriors stripping the pommels of their enemies' swords. Parts from several highly decorated helmets were also found, including a beautiful figure of an animal which possibly formed a helmet crest.

One of the most remarkable pieces in the hoard is a stylised seahorse decorated using a filigree technique. An elaborately decorated pair of sword pyramids were also in the hoard. Pyramids like this have been discovered in several Anglo-Saxon graves, lying beside sword scabbards. The pyramids would have adorned a leather strap that would have been attached to a scabbard. Straps like this are mentioned in the Viking sagas, where they are called 'peace bands'. They could be tied around the handle of the sword, securing it in place in the scabbard so warriors were not able to draw their swords suddenly in anger.

Among the most conspicuous finds in the Hoard is a richly decorated helmet cheek piece, with four bands of running, interlaced, animals. Fragments of decorated silver plates have also been found, which probably covered much of the outside of the helmet. A lozenge-shaped solid gold plate, which would have once been part of the handle fitting of a seax (The Anglo-Saxon word seax is used to describe a single-edged knife) is decorated with a beautifully worked pattern of interlaced animals. 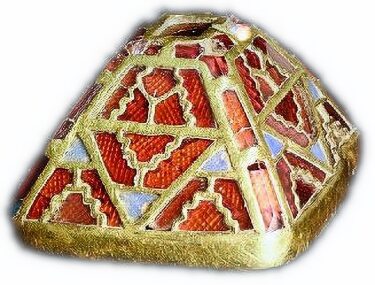 There is agreement that the typical object in the hoard was made in the seventh century, but the date when the hoard was deposited in the field was some point after that of the latest object found. The artefacts were discovered in what was the heartland of the Anglo-Saxon kingdom of Mercia which was militarily aggressive and expansionist during the seventh century under kings Penda, Wulfhere and Ethelred.

The closest discovery to the Staffordshire Hoard is the Anglo-Saxon ship burial at Sutton Hoo which was unearthed in 1939. Consisting of a large mound, it was found to contain a 90-foot-long wooden ship complete with a central burial chamber. The chamber contained magnificent gold and garnet weapon fittings and a striking panelled helmet.

Beowulf contains lines that are believed to describe circumstances similar to the burial of the hoard:-

'One warrior stripped the other, looted Ongentheow's iron mail-coat, his hard sword-hilt, his helmet too, and carried graith to King Hygelac; he accepted the prize, promised fairly that reward would come, and kept his word. They let the ground keep that ancestral treasure, gold under gravel, gone to earth, as useless to men now as it ever was.'