Beowulf is an epic poem written in the Anglo-Saxon language which was composed in the eighth century and written down circa 1,000 by an anonymous bard. The poem is the oldest surviving epic in English literature.

Part history and part mythology, the long narrative poem, which was written in England, relates the story of a great Scandanavian fifth century warrior, Beowulf, a Geat (Swede) whose fame 'far flew the boast of him'. 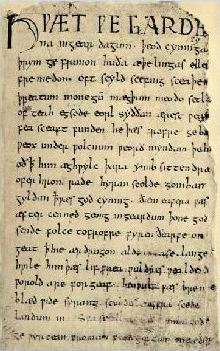 The only surviving manuscript dates to around 1010. This manuscript fortunately survived the Dissolution of the Monasteries under King Henry VIII and a disastrous fire which destroyed the library of Sir Robert Bruce Cotton (1571-1631), a keen collector of old manuscripts. On 23 October, 1731, Cotton's home was engulfed in flames which destroyed or damaged a quarter of his library. Beowulf was rescued along with other manuscripts, but its edges were badly scorched. The manuscript is now contained in the British Library at London.

The story related in the poem occurred in the late fifth century, during the century after the Anglo-Saxons had begun to arrive in England, and tells of how for many years a monster by the name of Grendel had terrorised the hall, Heorot, of the Danish king, Hrothgar and his wife Wealhþeow. The monster descends at nightfall, while Hrothgar's court is sleeping, to feed on his retainers.

Beowulf sails from his home in Geatland to aid the Danes and succeeds in killing the monster, tearing its arm from its body, and is celebrated as a hero. However, Grendel's mother arrives determined to avenge her son's death and in an outburst of hellish wrath, kills one of Beowulf's warriors. After tracking her to her lair under an eerie lake, Beowulf defeats Grendel's mother with the sword Hrunting.

He returns home to his own people, where he eventually inherits his father's throne. Fifty years later, Beowulf sustains mortal wounds in the last conflict with a dragon. The funerals described near the beginning and at the end of the poem, have been confirmed by archaeological discoveries.

The poem is written in alliterative verse, a style typical of Anglo-Saxon poetry. Alliteration is the repetition of initial sounds of words, Anglo-Saxon poetry does not possess stanzaic form or rhyme. The mother tongue from which Modern English descends, Anglo-Saxon, or English as it was known to its speakers, is closely related to Old Frisian and appears like an entirely different language to Modern English speakers.

Praise of the prowess of people-kings

we have heard, and what honor the athelings won!

from many a tribe, the mead-bench tore,

awing the earls. Since erst he lay

friendless, a foundling, fate repaid him:

for he waxed under welkin, in wealth he throve,

till before him the folk, both far and near,

who house by the whale-path, heard his mandate,

gave him gifts: a good king he!

To him an heir was afterward born,

a son in his halls, whom heaven sent

to favor the folk, feeling their woe

that erst they had lacked an earl for leader

so long a while; the Lord endowed him,

the Wielder of Wonder, with world's renown.

Famed was this Beowulf: far flew the boast of him,

son of Scyld, in the Scandian lands.

So becomes it a youth to quit him well

with his father's friends, by fee and gift,

that to aid him, aged, in after days,

shall an earl have honor in every clan.

Forth he fared at the fated moment,

sturdy Scyld to the shelter of God.