The legendary and charismatic Owain Glyndwr, a potent figurehead of Welsh nationalism, was the last native Prince of Wales.

Owain Glyndwr (anglicized as Owen Glendower) was born of aristocratic stock in around 1354, the son of Gruffydd Fychan II, Hereditary Tywysog of Powys Fadog and Lord of Glyndyfrdwy and Elen ferch Tomas ap Llywelyn of Deheubarth and could claim descent from all three of the major royal houses that had dominated Wales before the English conquest of 1282. On the death of his father when Owain was around sixteen years old he was taken into the home of David Hanmer, a lawyer, who sent the young Owain to London to study law at the Inns of Court. 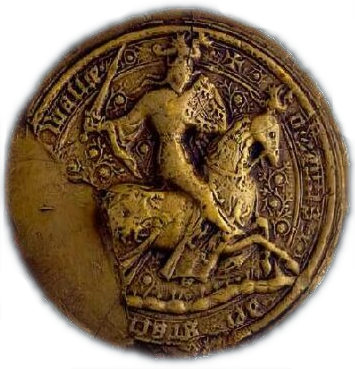 He had returned to his native Wales by 1383 and married David Hanmer's daughter, Margaret, by whom he had a large family. He owned lands at Sycharth, in the Welsh Marches near Oswestry and in Glyndyfrdwy (probably his birthplace), near Llangollen. At around age the of 25 he served in King Richard II's army on the Scottish Border and later again served in the English king's Scottish and French campaigns.

In the late 1390's Glyndwr was at loggerheads with his powerful neighbour, Reginald de Grey, Lord of Ruthin, an Anglo-Norman marcher lord and associate of the new Lancastrian king, Henry IV. Henry had usurped the throne of his cousin, Richard II, who was incarcerated and met his end at Pontefract Castle in February of 1400. Welsh sympathies remained with Richard. Unable to obtain justice from Henry IV, Glyndwr raised the standard of rebellion at Ruthin on 16 September 1400 and was proclaimed Prince of Wales by his small band of followers. 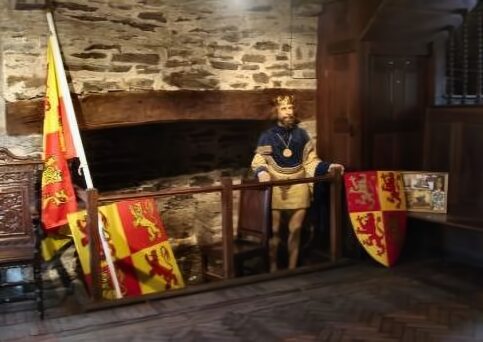 By 19th September, the De Grey stronghold of Ruthin Castle was attacked, the town was burnt to the ground and only the castle left standing... Denbigh, Rhuddlan, Flint, Hawarden, and Holt followed in quick succession. By the 24th Owain was moving south attacking Powis Castle and sacking Welshpool. Simultaneously, the Tudor brothers from Anglesey, cousins of Owain, launched a guerrilla war against English rule. These guerilla warfare tactics were to prove highly effective.

In response King Henry IV declared war on the Welsh rebel and declaring Owain's estates forfeit to the English crown marched a large army into north Wales arriving in Bangor in early October. Glyndwr staged a series of guerilla attacks, ambushing the English army and eventually forcing the king to retreat to London. The English king responded by introducing even more draconian legislation. The Welsh were no longer allowed to hold public office and mixed Welsh/English marriage was not tolerated.

Alienation was the inevitable result of these measures and the revolt spread rapidly. Henry IV appointed his cousin Henry Percy, the famous Harry Hotspur, son of the Earl of Northumberland, to contain it. In April 1401, Glyndwr's allies, Rhys and Gwilym ap Tudor of Anglesey, ancestors of Henry VII, with a force of only 40 men, boldly took Conway Castle and in June Glyndwr gained his first military victory at Mynydd Hyddgenon, Pumlumon. In response, Henry IV launched another army into Wales through Powys toward the Strata Florida Abbey, when the abbey was destroyed and its monks executed but hampered by bad weather and guerilla attacks, the English army was forced to retreat to Hereford.

In June of 1402 Glyndwr''s forces met with an army led by Henry IV's cousin, Sir Edmund Mortimer, the uncle of the Earl of March, at Bryn Glas, near the village of Pilleth, a few miles from Presteigne. Mortimer's army was defeated and Edmund Mortimer himself captured, Bryn Glas was a bloody battle that ended, according to rumour, in Welsh women mutilating the dead English soldiers.

An offer was made to release Edmund Mortimer in return for a ransom, but since Mortimer, by the strict laws of primogeniture, could be said to possess a superior claim to the English throne than himself, Henry IV was subsequently not over eager to secure his release. Mortimer later negotiated an alliance with Glyndwr and married his daughter Catherine. Mortimer was well connected, his sister, Elizabeth was married to the powerful magnate Harry Hotspur.

By the end of 1403, Glyndwr controlled most of Wales. In 1404 he took the castles of Aberystwyth and Harlech, negotiated an alliance with the French and held a parliament at Machynlleth, where he was possibly crowned Prince of Wales in the presence of envoys from France, Scotland and Castile. He probably chose Machynlleth for its central location, in an area now under his control. Glyndwr sought to strengthen his position by establishing alliances with foreign powers, both with the Scots and the French. His letter to Charles VI of France, the famous "Penal" letter which survives to the present day, yielded some financial and military support.

Most serene prince, you have deemed it worthy on the humble recommendation sent, to learn how my nation, for many years now elapsed, has been oppressed by the fury of the barbarous Saxons; whence because they had the government over us, and indeed, on account of the fact itself, it seemed reasonable with them to trample upon us. But now, most serene prince, you have in many ways, from your innate goodness, informed me and my subjects very clearly and graciously concerning the recognition of the true Vicar of Christ. I, in truth, rejoice with a full heart on account of that information of your excellency, since from this information, I understood that Lord Benedict, the supreme pontifex intends to work for the promotion of a union in the Church of God with all his possible strength. Confident indeed in his right, and intending to agree with you as indeed as far as it is possible for me, I recognize him as the true Vicar of Christ, on my own behalf, and behalf of my subjects by these letters patent, foreseeing them by the bearer of their communications in your majesty's presence. And because, most excellent prince, the metropolitan church of St. David was, as it appears, violently compelled by the barbarous fury of those reigning in this country, to obey the church of Canterbury, ad de facto still remains in the subject of this subjection. Many other disabilities are known to have been suffered by the Church of Wales through these barbarians, which for the greater part are set forth full in the letter patent accompanying. I pray and sincerely beseech your majesty to have these letters sent to my lord, the supreme pontifex, that as you deemed worthy to raise us out of darkness into light, similarly you will wish to extirpate and remove violence and oppression from the church and my subjects, as you are well able to. And may the Son of the Glorious Virgin long preserve your majesty in the promised prosperity.

Yours avowedly Owen, Prince of Wales.

With French aid, an attack was made on Caernarfon Castle by Glyndwr's supporters. In response, Henry of Monmouth, the sixteen year old son of Henry IV and the future Henry V attacked Glyndwr's homes at Glyndyfrdwy and Sycharth. The fiery Harry Hotspur threw in his lot with Glyndwr and raised the standard of revolt against Henry IV, to be defeated and slain leading an impulsive charge at the Battle of Shrewsbury.

In 1404, Glyndwr, now at the peak of his power, took the castles of Harlech and Aberystwyth and held Court at Harlech. A French expeditionary force landed at Milford Haven and joined a Welsh army to attack Worcester, capturing several important castles as they went. The English, however, started to regain control of Wales, and support for Glyndwr's revolt began to fade. The heart had gone out of the Welsh resistance movement.

Unbowed, Glyndwr launched a raid on the Shropshire border in 1410, which resulted in three of his leading supporters being captured and executed, these included his cousin Rhys ap Tudur of Penmynydd in Anglesey who was executed in Chester. Glyndwr himself managed to evade capture. The French left in 1409 and Harlech Castle surrendered to the English.

Glyndwr disappeared from the pages of history, thereafter a fugitive in the Welsh mountains. He is believed to have spent his last years at Kentchurch, in Herefordshire near the manor of his son-in-law, Sir John Scudamore, Sherrif of Herefordshire and to have died in around 1416, the location of his grave is unknown.

The Owain Glyndwr Society's president Adrien Jones, claimed in 2006 "Four years ago we visited a direct descendant of Glyndwr, (Sir John Scudamore), at Kentchurch Court, near Abergavenny. "He took us to Monnington Straddle, in Herefordshire, where one of Glyndwr's daughters, Alice had lived. (He) told us that he spent his last days there and eventually died there. It was a family secret for 600 years and even (Sir John's) mother, who died shortly before we visited, refused to reveal the secret. There's even a mound where he is believed to be buried at Monnington Straddle." The author Alex Gibbon, however, claims in his book 'The Mystery of Jack of Kent and the Fate of Owain Glydwr', that the body of Glyndwr was returned to Wales after his death in Herefordshire and buried at St Cwrdaf Church, in Llanwrda, Carmarthenshire.

Llywelyn the Last PreviousNext Castles of Edward I