Henry Percy, later made famous as 'Harry Hotspur' was born on 20 May 1364 at Alnwick Castle in Northumberland. He was the eldest son of Henry Percy, 1st Earl of Northumberland, and Margaret Neville, daughter of Ralph de Neville, 2nd Lord Neville of Raby, and Alice de Audley.

When he was twelve years old, Harry received a knighthood from King Edward III and at the age of fourteen saw active service at the Siege of Berwick. In 1380 he accompanied Edmund Mortimer, 3rd Earl of March to Ireland and in 1383 travelled in Prussia. 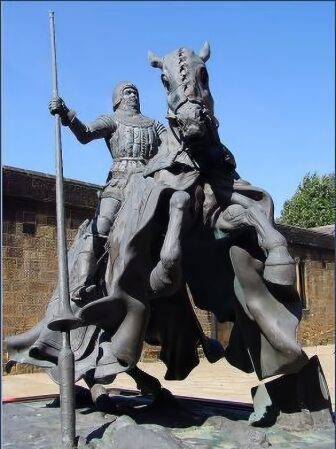 King Richard II appointed Harry as warden of the East March and in 1385 he accompanied Richard on an expedition into Scotland. In tribute to his rapid advance and readiness to attack, the opposing Scots nicknamed him 'Hatspore', the name seems to have stuck. In April 1386 Hotspur was dispatched to France to reinforce the English garrison at Calais, while there he led raids into Picardy. Between August and in October 1387 he took command of a naval force in an attempt to relieve the siege of Brest. Richard II honoured him by creating him a Knight of the Garter in 1388.

During the proceeding years, the renown of Hotspur continued to grow. His military and diplomatic service rendered substantial marks of royal favour in the form of grants and appointments, but regardless of these signs of Richard's favour, in June 1399 the Percies gave their support to the rebellion of Richard's cousin, Henry Bolingbroke, the son of John of Gaunt, Duke of Lancaster. Hotspur and his father met up with Bolingbroke's forces at Doncaster and proceeded south with them. After the deposition of King Richard II, Bolingbroke was crowned King Henry IV, Percy and his father received lavish rewards of lands and offices. The new king appointed Hotspur High Sheriff of Flintshire in 1399.

The Scots, led by James Douglas, Earl of Douglas, and the Earls of Mar and Moray invaded England in the summer of 1388. The Earl of Northumberland sent his sons Sir Harry and Sir Ralph against them. In a skirmish which took place by the walls of Newcastle, Douglas is reported to have captured Hotspur's pennon, which he bragged he would fix to the walls of Dalkeith. The Scots then retreated to Otterburn. Intent on recovering his lost pennon, Hotspur led the English forces against them at the Battle of Otterburn. Douglas was killed in the battle and Hotspur was captured by the Scots, along with his brother Ralph, but was soon ransomed for a fee of 7,000 marks.

Harry Percy married Elizabeth Mortimer, the eldest daughter of Edmund Mortimer, 3rd Earl of March, and Philippa Plantagenet, who was the only child of Lionel, 1st Duke of Clarence, and Elizabeth de Burgh, Countess of Ulster, the marriage produced two children:

The Percys became increasingly discontented with King Henry IV, who had failed to make the payment owed to them for the defence of the Scottish border. Further grievances included his favour towards Dunbar, his demand that the Percys hand over their Scottish prisoners and his failure to put an end to Owain Glyndwr's rebellion through a negotiated settlement. Further irritated by Henry IV's failure to ransom Hotspur's brother-in-law, Sir Edmund Mortimer (1376-1409), whom the Welsh had captured in June 1402. Indeed, Henry seemed happy to allow the Welsh to detain Mortimer indefinitely. Mortimer possessed a claim to the throne which many considered superior to Henry's own, being the grandson of Lionel, Duke of Clarence, the second surviving son of King Edward III. Henry himself descended from Edward's 3rd surviving son.

In the summer of 1403, probably in collusion with Glyndwr, the Percys rose in rebellion and took up arms against Henry IV. Soon after the victory at Homildon Hill, Hotspur issued proclamations accusing the King of 'tyrannical government'. He was joined by his uncle, Thomas Percy, Earl of Worcester and marched to Shrewsbury to meet the kings forces in battle. However, his father, Henry Percy, Earl of Northumberland was slow to move south with his forces to rendezvous with them and Hotspur and Worcester arrived at Shrewsbury alone on 21 July 1403, where they found the King waiting for them with a large army. 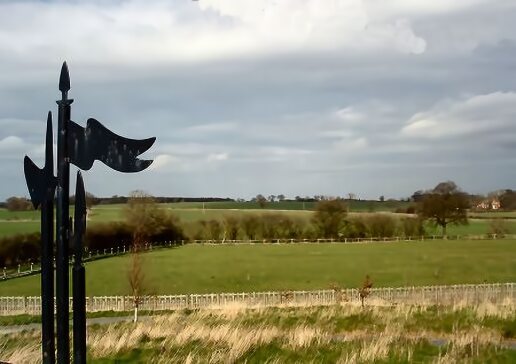 The following morning, ominously, Glyndwr had still not arrived with reinforcements, perhaps taken by surprise at the speed of the King's advance. The Royal army marched out of the town to meet the rebels at Haytely Field, about three miles from the centre of the town on the road to Whitchurch. Estimates regarding the sizes of the two armies vary widely, the King's army, which far outnumbered that of the rebels, is generally considered to be between 15,000 and 60,000 men, while the rebels numbered between 5,000 and 20,000. Parleys were entered into, which failed to result in an acceptable agreement, rendering battle inevitable.

By around the hour of noon, order for the advance was given and battle commenced. The assault was opened with a deadly exchange of arrows, a dread and whirring cacophony which resulted in many casualties on both sides. The Prince of Wales was wounded in the face with an arrow but staunchly refused to retire from the field. When the two armies clashed, the larger Royal army began to gain the upper hand, although the Earl of Stafford, who led the centre of the King's army was killed in the fighting. Harry Hotspur fell whilst leading a rash and impulsive charge, as a result of an arrow hitting his forehead, entering his brain. Morale in the rebel army suffered as a result of Hotspur's death and as dusk began to fall on the battlefield, the rebels fled, resulting in a general rout.

The body of Hotspur was recovered in the gathering twilight, the king is said to have wept over the body. An eclipse of the moon that night cast an eerie blackness over the desolate field, which was littered with the dead and the dying. Henry IV at first allowed Hotspur's body to be interred at Whitchurch. In response to rumours that he had survived the battle, his attitude hardened and he had it disinterred. Hotspur's body was set up in Shrewsbury, impaled on a spear between two millstones, and was later quartered, its parts dispatched to separate locations in the kingdom, his head impaled on a pike at the gates of York, a grim warning of the king's terrible retribution to others. The Earl of Worcester was taken alive but later beheaded and his head set up on a spike on London Bridge.

Henry eventually relented and allowed the remains of Hotspur's body to be delivered to his widow, Elizabeth Mortimer. She had him buried in York Minster. In January 1404, Percy was posthumously declared a traitor, and his lands were forfeited to the crown.