King Henry V, "too famous to live long", in the words of his brother, John, Duke of Bedford, reached the apogee of medieval kingship. Revered as a hero of legendary proportions in his lifetime and later immortalized as the patriot King by Shakespeare, by the standards of his own time, by which he must ultimately be judged, he was one of the greatest of the House of Plantagenet. 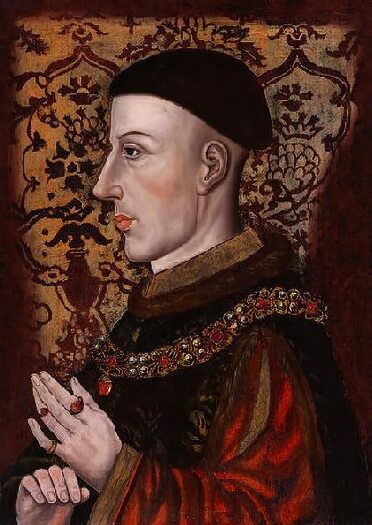 Henry was born on either 9th August, or 16th September, 1387 at Monmouth Castle, the son of Henry of Bolingbroke (later Henry IV) and Mary de Bohun. Since he was not expected to inherit the throne at the time, his date of birth has not been recorded with accuracy. Henry received his education at the hands of his great-uncle, Cardinal Beaufort. He had the midnight colouring of his mother's family, the de Bohuns and was of middling stature.

The young Henry was knighted by his cousin, Richard II, during the latter's Irish campaign and was part of Richard's retinue, a hostage for his father's good behaviour, when Bolingbroke landed at Ravenspur to lead the rebellion which culminated in his usurpation of the English throne. However, Richard treated the boy well and made no threats against him.

The young Henry was created Prince of Wales on the same day as his father's coronation. He was further given his grandfather, John of Gaunt's title of Duke of Lancaster in November 1399.

Henry had early experience of warfare, when he put down the rebellion and fought at the Battle of Shrewsbury in his father's reign, during the conflict he was wounded in the face by an arrow which entered below his eye, luckily missing both brain and spinal cord and stuck in the bone at the back of the skull. To remove the embedded arrowhead, special tongs had to be constructed and carefully inserted nearly six inches into the wound to grip and extract the metal.

He proved himself a distinguished soldier and leader of men but was said to have been wild and dissident in his youth. Towards the end of Henry IV's reign, relations between Henry and his father had deteriorated, Henry IV thought his ambitious son far too eager to step into his shoes. In a scene from Shakespeare, he is portrayed as trying on the crown whilst his dying father slept.

The new king revived his great-grandfather King Edward III's claim to the French throne and after negotiations with his French counterpart had broken down, led an English army into France in 1415, renewing what later came to be known as the Hundred Years War. While preparations were being made for the invasion of France, the king's cousin, Richard Plantagenet, Earl of Cambridge entered into a conspiracy with Henry Scrope, 3rd Baron Scrope of Masham, and Sir Thomas Grey to depose the king and place his late wife Anne's brother, Edmund Mortimer, 5th Earl of March, on the throne. On 31st July Edmund Mortimer revealed the plot to the King, and further served on the commission which condemned Cambridge to death. Although Cambridge pleaded with the King for clemency, he was beheaded on 5 August 1415.

Henry V 'let loose the dogs of war' and landing in France unopposed, with the aid of his brother Thomas Duke of Clarence, he took the town of Harfleur. He then sent the Dauphin a message offering to settle their quarrel for the French throne by single combat, which was declined. Henry marched his army up to English Calais, a remnant of Edward III's conquests. Food was in short supply and a French prisoner informed the English that the ford over the Somme had been staked and guarded by a large French blockade. To add to the king's considerable troubles, dysentery, that scourge of medieval soldiers, was rife in his army. Henry's small army was now in a very precarious position, all bridges across the river had been smashed or heavily defended, but a way across was eventually discovered. Between the English army and their destination of Calais, a massive French army lay in waiting.

The Battle of Agincourt 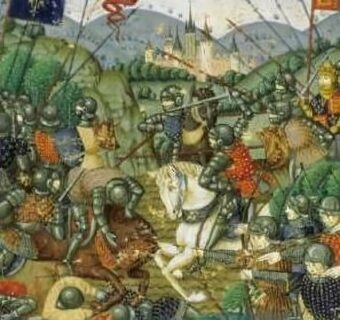 The Battle of Agincourt

The massive French army was hemmed into a small space, having no room for manoeuvre, with disastrous results. Unable to rise in heavy armour, men who went down in the crush were suffocated in their armour. French casualties were enormous. The French knights tried to rally and attempt a further charge but realised further resistance was hopeless.

Henry had won a spectacular and glorious victory for England against all odds. Among the English dead was his cousin, Edward, the obese Duke of York, who among many, had fallen in the mud and smothered in his armour. Returning to England in November, the Londoners gave a rapturous welcome to their hero King, Henry's popularity had reached its zenith. Click for a fuller account of the battle

The King crossed again to France in 1417, England having acquired an ally in Burgundy. Normandy was taken and by August, Henry had led his forces to the gates of Paris. An agreement was finally reached in 1420 by the Treaty of Troyes. By its terms the mentally ill (he is believed to have suffered from schizophrenia) King Charles VI of France recognised Henry as his heir, disinheriting his son, the Dauphin and the English King married Charles' youngest daughter, Catherine of Valois on 2nd June 1420.The Battle of Agincourt 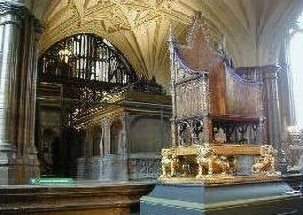 Following a brief respite in England, Henry returned to France to oppose the Dauphin, who now led the French resistance. Possessed of a fanatical determination, he succeeded in taking Dreux in August, 1421. News arrived from England that Queen Catherine had given birth to a son at Windsor on 6th December, 1421, named Henry in honour of his father. The King was never to see his only child.

The Death of Henry V

Henry laid siege to Meaux and the city was surrendered to him in May 1422. He had become seriously ill with dysentery, the bloody flux, and was weakened to such a degree that he found it impossible to ride at the head of his armies and humiliatingly had to be carried in a litter. Rest brought on some improvement in his condition which was followed by a total relapse.

Lying mortally ill for three weeks, he made arrangements for the government of his two kingdoms during his young son's minority. Henry died at Vincennes on 31st August 1422 aged 35.

His body was carried in procession across France and returned to England where it was buried behind the altar at Westminster Abbey, within a magnificent tomb. The inscription around the ledge translates as "Henry V, hammer of the Gauls, lies here".rest behind the altar in Westminster Abbey, close to the tomb of Edward the Confessor, and near the tomb of Richard II. A magnificent chapel was erected around his tomb, and a life-sized effigy with a head of solid silver was placed on the tomb. The silver was stolen during the sixteenth century.

Henry left a will which appointed his brother John Duke of Bedford, as governor of France and his youngest brother Humphrey, Duke of Gloucester was trusted with the guardianship of his infant son, the ill-fated Henry of Windsor, to whom he bequeathed two kingdoms and an inheritance that was to prove impossible to maintain.

The sword of Henry V 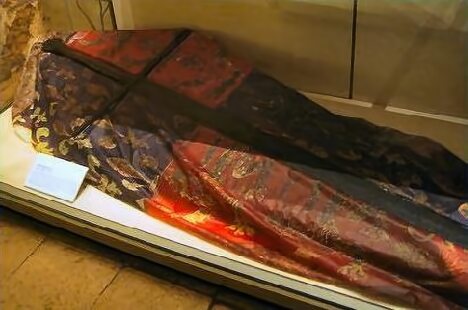 The saddle, helmet, sword and shield of King Henry V, which once formed part of his funeral 'achievements', are displayed in Westminster Abbey Museum, located in the abbey's eleventh century vaulted undercroft of St Peter. They were carried at his funeral in 1422 and later suspended on the wooden beam above the Henry V chantry for centuries, but in 1972 they were restored and placed in the abbey museum. 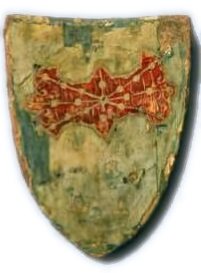 The limewood wooden shield which measures 2 feet high, is badly worn making it impossible to tell what decoration it may once have held, but it does have a small section of red velvet remaining on the inner side.

The saddle, which was originally covered in blue velvet, is the earliest surviving example of a new lightweight type, it still retains some of its original hessian padding and leather.

The sturdy domed great helm, made of dark metal edged with decorative brass, measures about sixteen inches high, it is a tilting helmet and therefore would not have been worn in battle.

Henry V's sword was lost for many years. A fifteenth-century sword was found in the Abbey triforium in 1869, it was discovered in a chest, beneath worn-out priestly robes and is believed to be that of the king. The sword has been dated before 1422 and measures about 3 feet long and bears marks of use. The sword's iron pommel and cross are simply decorated, both are gilded, though this may have been applied for Henry's funeral. The blade is fairly plain and measures around 27".

The vaulted undercroft is one of the oldest areas of the Abbey, dating back almost to the foundation of the Norman church by Edward the Confessor in 1065. Other items on display in the museum include a unique collection of royal and other funeral effigies, two panels of medieval glass, twelfth-century sculpture from the Norman abbey, Mary II's Coronation chair, replicas of the Coronation Regalia for coronation rehearsals, the armour of General Monck carried at his funeral in 1670 and the late thirteenth century Westminster Retable, England's oldest altarpiece.