Princess Mary, the only daughter of King George V and Queen Mary of Teck, was born on 24 April 1897 at York Cottage at Sandringham in Norfolk, during the last years of her great-grandmother Queen Victoria's reign. Her grandparents were Edward VII, Queen Alexandra, Francis Duke of Teck and Princess Mary Adelaide of Cambridge. 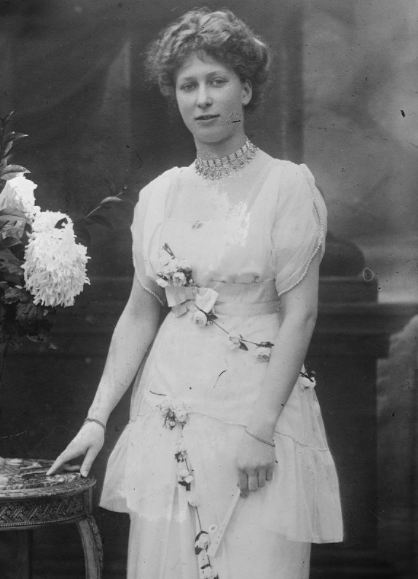 The new princess was christened at St Mary Magdalene's Church near Sandringham on 7 June 1897 as Victoria Alexandra Alice Mary, after her paternal great-grandmother Queen Victoria, her paternal grandmother, Alexandra, Princess of Wales, her mother and her maternal grandmother, Mary Adelaide, Duchess of Teck and her great-aunt, Alice, Grand Duchess of Hesse and by Rhine. She was known by the last of her Christian names, Mary.

Princess Mary was educated by governesses but shared some lessons with her three elder brothers, Princes Edward, Albert, and Henry. Princess Mary visited hospitals and welfare organizations with her mother during the First World War, visiting British servicemen wounded in action. She also established Princess Mary's Christmas Gift Fund, which sent Christmas presents to British soldiers and sailors. Her eldest, brother Prince Edward, is reputed to have said that it was 'a shame she was not heir to the throne as she is far cleverer than me.'Mary adopted an active role in promoting the Girl Guide movement and became honorary president of the British Girl Guide Association in 1920.

At the age of 24, Princess Mary married the 39-year-old Henry, Viscount Lascelles on 28 February 1922. He was the son of Henry Lascelles, 5th Earl of Harewood, and Lady Florence Bridgeman, daughter of Orlando Bridgeman, 3rd Earl of Bradford. Their wedding was held at Westminster Abbey. The couple had two sons-

(iii)Jeremy Lascelles, born 14 February 1955. He married Julie Bayliss on 4 July 1981; they were divorced. They have three children and four grandchildren. He married Catherine Bell on 7 January 1999. They have a daughter.

On 6 October 1929, Lord Lascelles succeeded his father as 6th Earl of Harewood, Viscount Lascelles, and Baron Harewood and 1 January 1932, Mary's father, George V declared that his only daughter should bear the title Princess Royal, succeeding her aunt Princess Louise, Duchess of Fife who had died the previous year.

Lascelles died in 1947. In 1965 the Princess visited her eldest brother Edward, Duke of Windsor, to whom she was particularly close when he was recovering from eye surgery at a London Clinic, she also visited the Duke#s wife, the former Wallis Simpson, which few members of the royal family were inclined to do. Shortly after she visited her brother, the 67-year-old Princess suffered a fatal heart attack during a walk with her elder son, Lord Harewood, and his children in the grounds of the Harewood House. After a funeral at York Minster, she was interred in the Lascelles family vault at All Saints' Church, on the Harewood estate.