The eldest daughter of Prince Christian of Schleswig-Holstein-Sonderburg-Glücksburg (later Christian IX of Denmark) and Louise of Hesse-Cassel, (herself the daughter of Prince William of Hesse and Charlotte of Denmark), Princess Alexandra of Denmark was born on 1st December 1844 at the Yellow Palace, an eighteenth-century townhouse adjacent to the Amalienborg Palace in Copenhagen. Christened Alexandra Caroline Marie Charlotte Louise Julia, she was known in the family as simply 'Alix'. 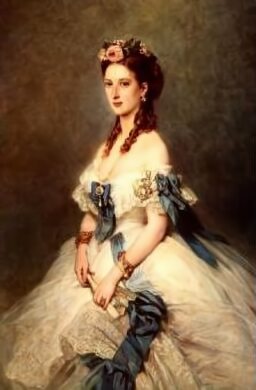 Alix was one of a family of six children, four of whom were to occupy European thrones, she had two sisters, Dagmar (1847 - 1928), who through her marriage to Tsar Alexander III, became Empress of Russia (pictured with Alix -right) and Thyra (1853 - 1933) later Crown Princess of Hanover. There were also three brothers, Frederick (1843 - 1912), later Frederick VIII of Denmark, William (1845 - 1913) destined to become George I of Greece and lastly Prince Valdemar of Denmark (1858 -1939). Her parents were not wealthy and the children were brought up simply, Alix and her sister Dagmar slept in an attic bedroom and made their own clothes.

The King of Denmark, Frederick VII, was childless and the question of who should succeed him a problematic one. Through his mother, Prince Christian was the great-grandson of King Frederick V of Denmark and was accepted as Frederick's heir presumptive. King Frederick ruled Denmark and the Duchy of Schleswig-Holstein, both of which had different rules concerning succession. The Salic Law applied in Holstein, which prevented inheritance through the female line, while inheritance through a female was permitted in Denmark.

When in 1863, Prince Christian suceeded to the throne of Denmark, Frederick of Augustenburg claimed to be the rightful heir to the two duchies. The following year Prussia and Austria initiated the Second war of Schleswig which was to eventually lead to the loss of both South Jutland and Holstein for Denmark.

Alix and her sister Dagmar 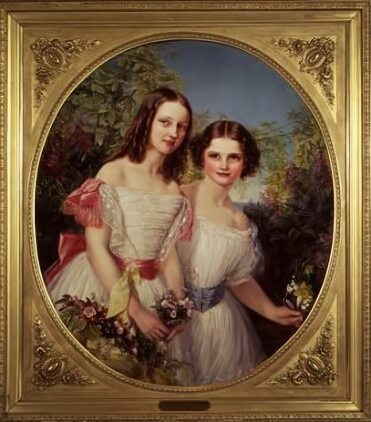 Albert, the Prince Consort, husband of Queen Victoria, considered the highly attractive Alexandra of Denmark would make a suitable wife for their eldest son and heir, Albert Edward, Prince of Wales. The pair were introduced by Albert Edward's elder sister, Victoria, Crown Princess of Prussia, on 24th September 1861 at Speyer. Although reporting back to his family that he found her "very pretty", 'Bertie', as he was known to the family, seemed in no hurry to propose to the Princess. Following the death of his father, the Prince Consort and a highly publicised affair with Nellie Clifden, which his mother rather hysterically blamed for his father's death, he was brought to propose to Alix on 9th September 1862 and was accepted. 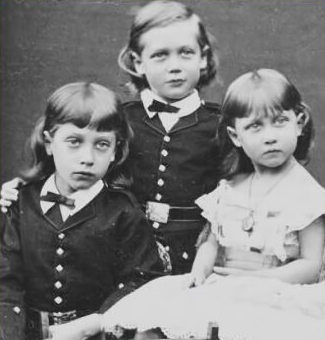 The couple were married at St. George's Chapel, Windsor Castle on 10th March 1863 and spent their honeymoon at Osborne House, Queen Victoria's retreat on the Isle of Wight. He was 21 and she 18 at the time. The first child of the marriage, Albert Victor Christian Edward, later created Duke of Clarence and Avondale, was born two months prematurely in January 1864 and weighed less than four pounds at birth. He was followed by a brother, George Frederick Ernest Albert, the future George V on 3rd June, 1865, after which three daughters, the Princesses Louise Victoria Alexandra Dagmar (1867 - 1931), who became Duchess of Fife, Victoria Alexandra Olga Mary (1868 - 1935) and Maud Charlotte Mary Victoria (1869 - 1938) of Wales, were born in succession. Following the birth of Princess Louise, Alix suffered from a bout of rheumatic fever, which left her with a permanent limp. Princess Alexandra's last child was another son, christened Alexander John Charles Albert, he was born prematurely on 6th April 1871 and lived but a day, he was buried at Sandringham churchyard.

The Sandringham estate in Norfolk was purchased by Queen Victoria for £22,000 in 1863, Bertie and Alix made it their country retreat. The couple loved entertaining and company and the house parties often held at Sandringham were gay and informal. The marriage was in many ways a happy one, but Bertie was not faithful to Alix and indulged in affairs with a string of mistresses. Alix also suffered from deafness, as a result of hereditary otosclerosis, which led to her social isolation and she spent more time at home with her children.

Alix and Bertie's eldest son Albert Victor, was engaged to Princess May of Teck but before the marriage could take place, fate intervened and Albert Victor became a victim of the great influenza pandemic of 1889-1892. He developed a heavy cold whilst staying at Sandringham House in Norfolk for the Christmas season, which developed into pnuemonia, resulting in his death at but 28 years old. His parents and his fiance, Princess May, were at his bedside at the end. Alix was said to have never fully recovered from the shock of the death of her eldest son and continued to keep his room at Sandringham undisturbed and shrine-like.

Alix with her sons Albert Victor, Duke of Clarence and Avondale and George, Duke of York 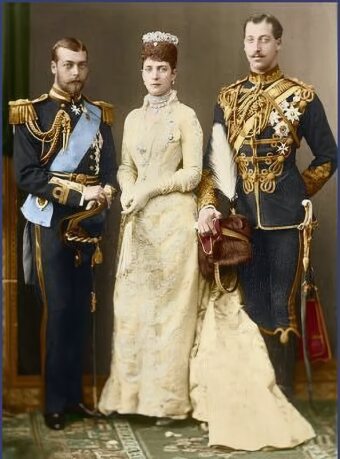 After a suitable period of mourning, Princess May was married to Alix's younger son, George. Alix proved to be a doting grandmother to their children. Prince George's family of six were raised at the small and cramped York Cottage on the Sandringham estate. Alix often tended to indulge the children which their parents did not always approve of.

On the death of his mother in 1901, at the age of 59, Bertie succeeded to the throne, he chose to reign as King Edward VII. The coronation had to be postponed due to his becoming seriously ill with appendicitis. After an operation had been performed, King Edward and Queen Alexandra were crowned together at Westminster Abbey in August 1901. King Edward VII reigned until 1910 and proved to be a popular King.

At the end of his life, due to his heavy smoking, King Edward was prone to severe bouts of bronchitis. The last persistent bronchial attack occurred in March 1910, while he was staying in Paris. He returned to London in April and by May, when it was realised that the King was dying, a bulletin was issued that he was suffering from bronchitis and that his condition caused some anxiety. The Queen was at the time in Corfu, visiting her brother, George I of Greece and was sent the disturbing news that the King was seriously ill. She immediately returned to London and arrived just the day before her husband died. He arose on Friday, 6th May feeling "wretchedly ill" as the day progressed the King began to drift in and out of consciousness and suffered a series of heart attacks. In a touching gesture, the Queen sent for his current mistress, Mrs Keppel, to allow her to say a last goodbye, shortly after this visit the King breathed his last.

After her husband's death, Alix moved back into Marlborough House, allowing the new king, her son George V and his wife Queen Mary, to move into Buckingham Palace but was allowed to retain Sandringham House for the duration of her lifetime. Her second daughter, Victoria, never married and remained with her mother as a companion. The First World War witnessed, the fall of the Romanov dynasty, her nephew, Tsar Nicholas II (the son of her sister Dagmar) his wife Alexandra and their five children were executed by revolutionaries at Ekaterinburg. Dagmar herself was rescued from revolutionary Russia in 1919 by a British ship, she was brought to England where she stayed for some time with her sister, Alix. The sisters bought a house in Denmark to enable them to stay in Denmark after the death of their parents.

Alix is famous for retaining a youthful appearance well into her senior years, but it was during the First World War that her age at last began to show. She resorted to wearing elaborate veils and heavy makeup to mask the effects of ageing and her health began to decline. In 1920, she was rendered temporarily partially blind when a blood vessel in her eye burst, her memory and speech also became impaired and she began to experience mild senile dementia. Alexandra of Denmark died at Sandringham on 20th November 1925 as a result of a heart attack and was buried beside her husband at St.George's Chapel at Windsor.