Guy Fawkes and the Gunpowder Plot

The government of Queen Elizabeth I had enforced severe measures of repression and punishments on Roman Catholics, who had expected a more tolerant regime from her Stuart successor James I. 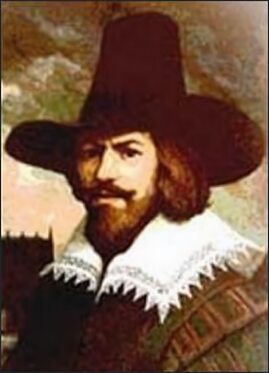 Although promising toleration, on inheriting the throne James discovered that though sound in principle, toleration was difficult in practice. During the first few months of James' reign all proceeded well and in July 1603 the fines for recusancy were remitted. James' minister, Cecil, through his experiences in the reign of Elizabeth, was alarmed at James' initial policy and its results. His anxiety was shared by the nation in general, and finally came to be held by the king himself, which led on the 22nd of February 1604 to a proclamation being issued banishing Catholic priests from England; on the 28th of November 1604, recusancy fines were demanded from wealthy persons, and on the 10th of February 1605 the penal laws were ordered to be re-enacted.

These measures led directly to the Gunpowder Plot of 1605, a conspiracy by a group of English Catholics led by Robert Catesby to kill James and put his daughter Princess Elizabeth on the throne ensuring that she was a Catholic. The plot intended to kill not only James I, but also everyone sitting in the Houses of Parliament during the state opening of Parliament on November 5th, 1605. The blowing up of Parliament was planned as the prelude to a revolt in the Midlands during which James's nine-year-old daughter, Princess Elizabeth, was to be installed as the Catholic head of state.

The first meeting between the conspirators occurred on 20 May 1604, most likely at the Duck and Drake Inn, just off the Strand, Thomas Wintour's residence when staying in London. Catesby, Thomas Wintour, and John Wright attended the meeting and were joined by Guy Fawkes and Thomas Percy.

The Guy Fawkes Inn, York, where Fawkes was born 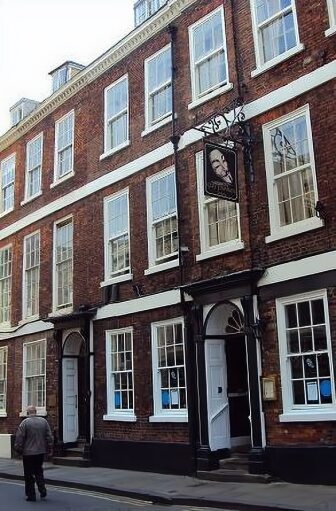 Robert Catesby, the leader of the plot was probably born in Warwickshire and was educated in Oxford. Catesby's family were prominent recusant Catholics. He had taken part in the 1601 Essex Rebellion but had been captured and fined, after which he sold his estate at Chastleton.

Guy Fawkes was born and educated in York. His father died when he was eight years old, after which his mother married a recusant Catholic. Fawkes later converted to Catholicism and left for the continent, where he fought in the Eighty Years' War on the side of Catholic Spain against Protestant Dutch reformers.

Robert Catesby rented a house right by the Houses of Parliament, from which the conspirators dug a tunnel to the undercroft of the House of Lords into which they smuggled thirty-six barrels of gunpowder.

Their well-laid plans went awry when one of the conspirators decided to warn a Catholic friend, Lord Monteagle, due to a sit in the House of Lords on the appointed day, not to attend. Alarmed, Monteagle took the unsigned letter to Lord Salisbury, the Secretary of State. He arranged a search of the cellars and Fawkes was arrested on the spot with both matches and touchwood in his possession.

Guy Fawkes was sent to the Tower of London and although he admitted his guilt, he refused to name any of his co-conspirators. He was removed to the White Tower, where he was placed in the dreaded dungeon of Little Ease, beneath the Chapel of St. John. This chamber measures only four feet square and kept any occupant constantly on his feet.

Fawkes was tortured terribly to extract a confession from him and he eventually divulged the names of the fellow conspirators. Sir William Wade, Lieutenant of the Tower, had orders from King James to use whatever means of torture was required to get information from Fawkes.

Of those involved, some were shot as they were chased by the law such as Percy and Catesby. With a small group of followers, Catesby made a stand at Holbeche House in Staffordshire, against a 200-strong company of armed men. He was shot and later found dead, clutching a picture of the Virgin Mary. As a warning to others, his body was exhumed and his head exhibited outside Parliament. Others were captured, sent to the Tower and, after a brief trial, eventually hung, drawn and quartered, with Fawkes, in January 1606.

Before his execution on 31 January, Fawkes jumped from the scaffold where he was to be hanged and broke his neck, thus avoiding the agony of the mutilation that followed.

In January 1606, during the first sitting of Parliament since the plot, the Observance of 5th November Act 1605 was passed, making services and sermons commemorating the Gunpowder Plot an annual event.