Offa, an outstanding figure in Anglo-Saxon history, referred to as 'of blessed memory' by Alcuin, was born into the Mercian Royal House circa 730, the son of Thingfrith, who was the son of Eanulf. He was descended from Eowa, the brother of King Penda of Mercia, who had been killed in battle in 643. Offa succeeded Beonraed to the throne of the sub-kingdom of Mercia in 757, who had murdered the previous ruler, Offa's cousin, King Aethelbald.

Offa obtained the throne of Mercia, or Mierce in Anglo-Saxon, in 757, during a period of civil war which followed the murder of Aethelbald who had reigned over the kingdom of Meercia for 41 years. 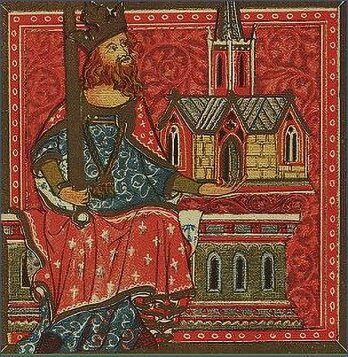 In the early fouteen years of his reign Offa consolidated his control of the midland tribes, the Hwicce and the Magonsæte. Taking advantage of instability in the kingdom of Kent Offa established himself as overlord there. Before 762 Kent was ruled by Æthelberht II and Eadberht I; Eadberht's son Eardwulf is also recorded as a king. Æthelberht died in 762, and Eadberht and Eardwulf are last recorded in that same year.

In 764, Offa granted land at Rochester in Kent, where Heahberht is recorded as king of Kent. A further king of Kent, Egbert, is mentioned on a charter in 765 along with Heahberht. There are differing opinions among experts as to whether Offa had general overlordship of Kent after this date.

In the 780s Offa extended Mercian supremacy over most of the south of England. A battle was fought at Orford in Kent in 776 which is recorded in the Anglo-Saxon Chronicle, which has been interpreted as a Mercian victory, the chronicle, however, fails to mention the outcome of the battle, the cause of the conflict is also not known. Charters issued by Offa from the years 785-789 makes his authority in Kent clear. Mercian control of Kent continued until Offa's death in 796. He also exerted his authority over the Kingdom of Sussex. 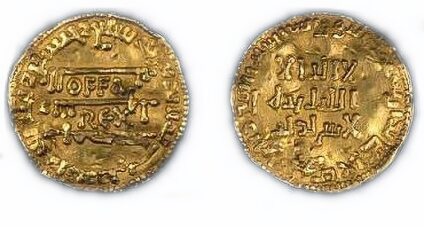 The Anglo-Saxon Chronicle informs us that Offa ordered the execution of King Æthelberht of East Anglia "King Offa ordered King Æthelberht's head to be struck off". He was executed at the royal vill at Sutton Walls. Mediaeval sources relate that he was taken captive whilst visiting his future Mercian bride Ælfthyth and was then murdered. In an account of Æthelberht's demise written by Richard of Cirencester, Offa's queen Cynethryth poisoned her husband's mind until he agreed to have his guest killed. Æthelberht was then bound and beheaded by a certain Grimbert and his body was unceremoniously dumped.

Offa's wife Cynethryth held the distinction of being only Anglo-Saxon Queen consort in whose name coinage was issued. Nothing certain is known of her origins. Her name recalls the wife and daughters of King Penda, Cynewise, Cyneburh, and Cyneswith, which may indicate that she was a descendant of Penda. Offa and Cynethryth produced five children, Ecgfrith, who later succeeded his father as King of Mercia and four daughters, Æthelburh, who in later life became an abbess, Eadburh, who married Beorhtric of Wessex, Ælfflæd and Æthelswith.

Cynewulf succeeded as King of Wessex in 757. Offa met him in battle at Bensington, in Oxfordshire, in 779, gaining a significant victory. Cynewulf was murdered in 796, after which it's possible Offa intervened to place Beorhtric on the throne of Wessex, who seems to have recognised Offa as his overlord. An alliance was cemented In 789 when Beorhtric married Offa's daughter Eadburh. Beorhtric requested that Offa deliver the rebel Egbert of Wessex to him, but instead of handing over Egbert to his enemy and certain death, Offa merely banished him from England. By the end of the 770s, Offa was acknowledged as Bretwalda, High King of England. This title appears in some charters and on some coins from the period.

A further alliance was formed Offa's daughter Ælfflæd was married Æthelred I of Northumbria in 792. Offa proved to be a formidable ruler and is often regarded as the most powerful Anglo-Saxon king before Alfred the Great. He was a contemporary of the great Frankish king Charlemagne and sought to stand up to him as an equal. 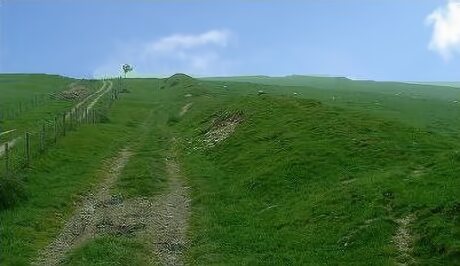 Offa is perhaps most famous for the construction of Offa's Dyke. The first mention of the Dyke occurs in Asser's 'Life of King Alfred', written in 893, nearly 100 years after the dyke's construction is thought to have been begun - "There was in Mercia in fairly recent times a certain vigorous king called Offa, who terrified all the neighbouring kings and provinces around him, and who had a great dyke built between Wales and Mercia from sea to sea".

Offa led campaigns against the Britons of Wales and as a result of these hostilities built Offa's Dyke, for which he is possibly best remembered. The huge dyke marked the border between Wales and Mercia.

Forming the traditional boundary between England and Wales, the dyke was built during the 780s. The impressive earthwork runs, although not continuously, from the Dee estuary in the north to the River Wye in the south. In places, Offa's Dyke is up to 65 feet (19.8 metres) wide (including its flanking ditch) and 8 feet (2.4 m) high. The northern end of Offa's Dyke has now been lost but it once apparently reached the sea at Prestatyn.

It was built in several sections to a single plan and included strong natural features and controlled routes into Wales. Thousands of men were required to complete the earthwork and each section appears to have been built by people from a different district. The fact that this mammoth undertaking was achieved illustrates the cohesion of the Mercian kingdom under Offa. The dyke was never garrisoned but would have been manned by relatively small local forces. 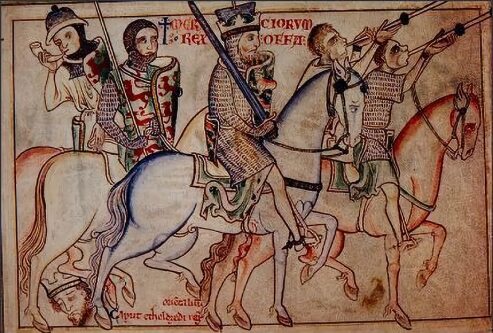 A palace at Tamworth was built by Offa, which was so magnificent in style and furnishings, that it was declared to be 'the wonder of the age'. He had links with Charlemagne, exchanging letters and gifts with the famous Frankish king, in 796 one of the first trade agreement between the two countries was signed, he is also believed to have established trading connections as far as Arabia.

Offa came into conflict with Jaenberht, the Archbishop of Canterbury but retained a friendly relationship with Pope Adrian I, whom Offa allowed increasing his control over the English church while accepting Offa's request for the creation of an archbishopric of Lichfield. This change in church organization freed the Mercian church from the authority of the archbishop of Canterbury in Kent.

King Offa of Mercia died on 29th July, 796, his achievements are regarded as second only to Alfred the Great among the Anglo-Saxon kings. Roger of Wendover records "Offa, the magnificent king of the Mercians, having nearly completed his most noble monastery, died, according to the opinion of many, in the town of Offley (in Hertfordshire), and his body is said to have been conveyed to the town of Bedford, and to have been buried in a royal manner in a certain chapel outside the city, situated on the bank of the river Ouse. It is reported by nearly all the people of that neighbourhood, even to the present day, that the aforesaid chapel, from decay and the violence of that river, was precipitated, together with the king's tomb, into the stream; and that the sepulchre is now seen by bathers in the summer time deep beneath the waters, but though it has been sought with the greatest diligence, yet, as if by a fatality, it cannot be found."

He was succeeded as King of Mercia by his son, Ecgfrith. Ecgfrith reigned for only 141 days, he was most likely killed by Offa's opponents.