Princess Victoria, was born on 21 November 1840 she was the eldest child of Queen Victoria and Albert of Saxe-Coburg-Gotha, the Prince Consort. The new arrival was baptised Victoria Adelaide Mary Louisa in the Throne Room of Buckingham Palace on 10 February 1841. The dowager Queen Adelaide, widow of King William IV, stood as one of her godmothers. 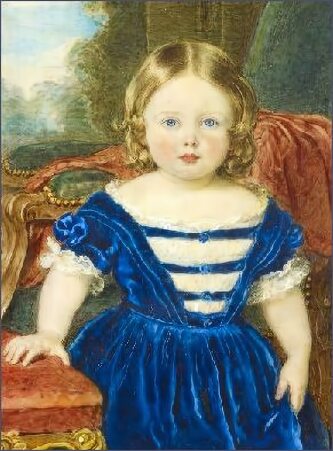 The education of the princess, known to the family as 'Vicky', a precocious and lively child who inherited her father's intelligence, was closely supervised by her parents and she was taught to converse in several languages. Vicky was joined by a brother, Albert Edward, the heir to the throne and the future Edward VII who was born on 9 November 1841, a sister Princess Alice followed in April 1843. In all her parents marriage produced nine children.

Vicky met her future husband, Prince Frederick William of Prussia for the first time in 1851 when he and his parents attended the opening of the Great Exhibition in London. Frederick, the son of Prince William of Prussia and Princess Augusta of Saxe-Weimar was the heir to the throne of Prussia after his father.

Vicky became engaged to 'Fritz' as he was known, when she was aged just fourteen, in 1855, when Frederick had been invited to Balmoral by her parents. Frederick was twenty-four at the time. 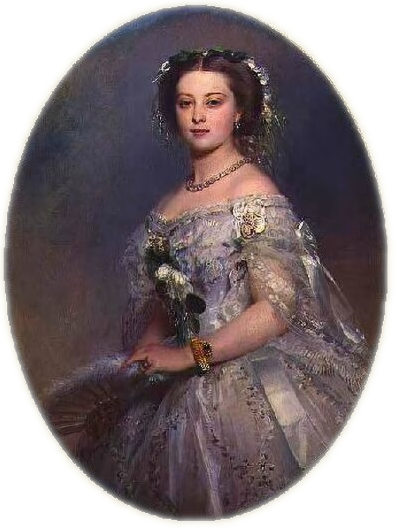 The couple were married when Victoria was seventeen. The wedding took place at the Chapel Royal, St. James's Palace, on 25 January 1858, the venue upset some of the Prussians who assumed the wedding would be held in their country, but Queen Victoria insisted it took place in England. The Queen and Prince Albert had hoped that Vicky's marriage to the future king of Prussia would cement close ties between England and Prussia and could lead to the emergence of a unified and liberal Germany.

The couple's first child, a son, Frederick William Victor Albert, the future Kaiser William II, was born on 27 January 1859 after a difficult confinement which resulted in the newborn being inflicted with a withered arm due to Erb's palsy, a now rare form of nerve damage, which paralysed his arm and stunted its growth. For a future German Emperor, this disability seemed disastrous, determined that the damage could be repaired, Vicky embarked upon a series of bizarre, almost medieval attempts to cure him, none of which produced the desired effect.

William was joined by a sister Victoria Elisabeth Auguste Charlotte, born on 24 July 1860, known as Charlotte, she later married Bernhard III, Duke of Saxe-Meiningen. A second son, Albert William Henry, known as Henry, arrived on 14 August 1862 who later married his first cousin Irene, Victoria's sister Alice's daughter. He was followed by Franz Frederick Sigismund on 15 September 1864, who tragically died from meningitis at the age of 21 months, Frederika Amelia Wilhelmine Victoria was born in 1866, Joachim Friedrich Ernst Waldemar in February 1868, who died from diphtheria in March 1879, Sophie Dorothea Ulrike Alice, destined to become Queen of the Hellenes, was born on 14 June 1870, and finally Margaret Beatrice Feodora, the couple's last child was born on 22 April 1872.

On the death of his childless uncle King Frederick William IV of Prussia in January 1861 Frederick's father ascended the Prussian throne as King William I and Frederick became Crown Prince of Prussia. Fredrick and Victoria were politically isolated at the conservative Prussian court and in the House of Hohenzollern, their liberal and Anglophile views conflicted with those of the authoritarian Prussian minister-president, Otto von Bismarck. Despite their efforts to educate their eldest son, Wilhelm, in British attitudes of democracy, he favoured his German tutors and his grandfather's views in aspiring to autocratic rule and thus became alienated from his parents, William suspected them of putting Britain's interests first.

During the three Wars of German Unification - the 1864 Prussian-Danish War, the 1866 Austro-Prussian War, and the 1870-71 Franco-Prussian War - Victoria and Frederick strongly identified with the cause of Prussia and the North German Confederation. Their sympathies created much friction in Queen Victoria's extended family, since Victoria's younger brother, Albert Edward Prince of Wales, was married to Princess Alexandra of Denmark, the elder daughter of Christian IX of Denmark, who was also the reigning duke of the disputed territories of Schleswig and Holstein. At Versailles on 18 January 1871, the princes of the North German Confederation proclaimed a German Empire with King William I of Prussia as the hereditary German Emperor.

On the death of his father on 9 March 1888, Frederick ascended the throne as Emperor Frederick III. He was, however, terminally ill from cancer of the larynx. The British doctor Sir Morell Mackenzie, who had diagnosed with cancer, advised a tracheotomy, to which Frederick agreed. On 8 February, a month before his father died, a cannula was fitted to allow him to breathe, for the rest of his life he was unable to speak and often communicated through writing. Despite his debilitating illness, Frederick did his best to fulfil his obligations as Emperor. After the announcement of his accession, he took the ribbon and star of his Order of the Black Eagle from his jacket and pinned it on the dress of his wife, he was determined to honour Victoria's position as Empress. Frederick died at the age of 42 after a reign of just 99 days.

While her son ascended the throne as Emperor William II, Victoria retired to Castle Friedrichshof, which she had built-in memory of her late husband near Frankfurt am Main. Her relationship with her difficult and highly egotistical eldest son remained fractious, it was further strained by his cold and callous treatment of her following the death of her husband. William had sent troops to seal off the palace and papers were confiscated, which outraged his mother. Known as Die Engländerin (the Englishwoman) in Germany, even though her ancestry was almost entirely German. Victoria had never been popular as a result of her liberal views. Like her mother Queen Victoria, she dressed in mourning for her husband for the rest of her life.

During a visit to Balmoral to see her mother in 1899, Victoria was diagnosed with inoperable breast cancer. By the autumn of 1900, the cancer had spread to her spine, she was too ill to attend the funeral of her mother who died at Osborne House on the Isle of Wight on 22nd of January, 1901 in the arms of Victoria's son William.

Victoria died at Castle Friedrichshof on 5 August 1901, less than seven months after the death of her mother. She was buried in the royal mausoleum of the Friedenskirche at Potsdam on 13 August 1901 next to her husband. Two of her eight children, Sigismund (died age 2) and Waldemar (died age 11), are also buried in the mausoleum.