Edward of York was born circa 1373, the eldest son of Edmund of Langley, 1st Duke of York, (fourth surviving son of Edward III) and his first wife, Isabella of Castile, daughter of Pedro the Cruel and his mistress, Maria de Padilla. 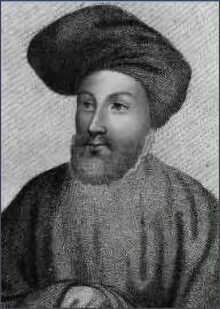 Edward was knighted at the coronation of King Richard II, on 16 July 1377, he remained close to his cousin King Richard throughout his life. At the age of eight, Edward accompanied his father to Lisbon where he was betrothed to Beatrice, the daughter of King Ferdinand of Portugal, on 29 August 1381 as part of a political alliance between England and Portugal against Castile. Following a rapprochement between Portugal and Castile the marriage was annulled and Beatrice later married King John I of Castile. King Richard created Edward Earl of Rutland on 25 February 1390.

In revenge against the Lords Appellant, Richard II arrested his uncle, Edward III's youngest son, Thomas of Woodstock, Duke of Gloucester, on 11 July 1397. Edward, Earl of Rutland was appointed to Gloucester's office of Constable of England and served on of the eight-member commission which reached the decision to accuse Gloucester of high treason. He was later accused of sending men to assist in his uncle's subsequent murder at Calais, which he denied. However in September 1397 Edward received a large grant of Gloucester's forfeited lands, and was created Duke of Aumale, a title which had previously been held by his uncle.

Edward presided as constable over the aborted judicial combat between his cousin Henry Bolingbroke, (the future King Henry IV) and Thomas Mowbray, 1st Duke of Norfolk On 16 September 1398, King Richard consequently exiled Bolingbroke and Norfolk and on the death of Bolingbroke's father, John of Gaunt, Duke of Lancaster, confiscated his vast Lancastrian estates.

In May 1399 Edward accompanied Richard to Ireland on campaign, and in the King's absence, Bolingbroke landed in England, towards the end of June, near Ravenspur, in Yorkshire. Around 19 July Richard arrived at Milford Haven in South Wales and entered into negotiations with Bolingbroke. Edward's father, Edmund of Langley, 1st Duke of York, who had been left as regent in England, raised an army on hearing of Bolingbroke's landing in Yorkshire, however on realising Richard's cause was lost, he deserted to Bolingbroke at Berkeley on 27 July. Edward, following his father's example, also deserted Richard and was said to be wearing Bolingbroke's livery when he was sent by Bolingbroke to Richard at Flint Castle. Bolingbroke succeeded to the throne as King Henry IV. At Henry IV's first parliament York was denounced as the murderer of Gloucester. After stating that his part in the events of 1397 had been performed under constraint, his life was spared, but he was reduced to his former rank as Earl of Rutland.

On 1 August 1402 Edward's father died, and he succeeded him as 2nd Duke of York. In February 1405 the Welsh rebel leader, Owain Glyndwr, his son-in-law, Sir Edmund Mortimer, and Henry Percy, 1st Earl of Northumberland, entered into an alliance which was connected to a plot to free Mortimer's nephew, Edmund Mortimer, son of the appointed heir to Richard II, from custody. On 13 February 1405 the young Edmund Mortimer and his brother, Roger, were abducted from Windsor Castle, they were recaptured near Cheltenham. York's sister, Constance, Lady Despenser, was found to be involved, and further accused York of complicity in the plot. Although he at first denied the charge, he later admitted to knowledge of the conspiracy and was arrested, he was imprisoned in the Tower of London and later at Pevensey Castle, where he remained for seventeen weeks before being released from custody.

Between the years 1406 and 1413 York translated the' Livre de Chasse' of Gaston III, Count of Foix, which he dedicated to Henry, Prince of Wales. The Livre de Chasse was one of the most famous of the hunting treatises of the Middle Ages, York added five chapters of his own, on the conditions and practice of hunting and of game management in England, the English version was known as The Master of Game.

Tomb of Edward, 2nd Duke of York at Fotheringhay Church 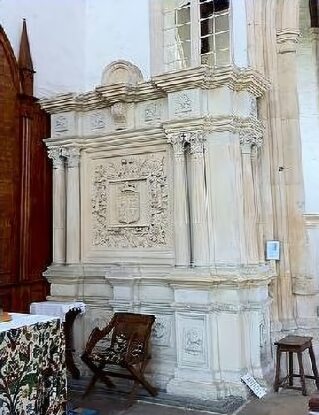 After accompanying Henry IV's son, Thomas, duke of Clarence, on his French expedition of 1412, he remained in Aquitaine until August 1413. Henry IV died on 20 March 1413 and was succeeded by his eldest son as King Henry V.

As Henry V was making preparations for his Agincourt campaign the Southampton Plot was discovered, in which Edward's younger brother, Richard of Conisburgh, Earl of Cambridge, was found to be involved in a conspiracy with Henry Scrope, 3rd Baron Scrope of Masham, and Sir Thomas Grey to depose and murder Henry and his brothers, and place Richard's brother-in-law, Edmund Mortimer, 5th Earl of March, on the throne. Mortimer himself revealed details of the plot to the King and served on the commission which condemned Cambridge to death. Although Cambridge pleaded for mercy, he was beheaded on 5 August 1415.

York sailed to France with the English army and was present at the siege of Harfleur, where he made out his will on 17 August 1415, in which he admitted he was 'bound to pray' for the soul of Richard II, he then commanded the van on the army's march through northern France.

He was in command of the right-wing of the English army at the Battle of Agincourt, Henry V commanded the centre, with Lord Camoys taking command of the left-wing. He died during the battle, on the 25th of October 1415. There are several conflicting accounts of the manner of York's death. Some chroniclers record he died of a head wound while fighting while others claim that he died of exhaustion, smothered in his armour, being crushed by the weight of others falling on top of him, or of a heart attack brought on by the fact that he was grossly overweight. He was around forty-two years old at the time of his death and was the highest-ranking English casualty at Agincourt.

York was interred at Fotheringhay Church and his estates and titles were inherited by his brother Cambridge's four-year-old son. His body was originally buried in the chancel at Fotheringhay, which was to become the mausoleum of the House of York. Following the destruction of the church choir in the sixteenth century, Queen Elizabeth I visited Fotheringhay in 1566, she saw the desecrated and shattered tombs among the ruins of the collegiate quire. Expressing disgust at this lack of respect, she ordered the removal of the York tombs and erected the present monuments around the altar.

Edward's widow Philippa de Mohun lived on until 17 July 1431 and was buried in Westminster Abbey.