Fotheringhay, The Mausoleum of the House of York

St Mary and All Saints Church

The beautiful Perpendicular style Church of St Mary and All Saints, with its distinctive tall tower, is situated above the River Nene at the village of Fotheringhayin Northamptonshire. It contains memorials to many of the members of the House of York.

The ceiling of St Mary and All Saints Church, Fotheringhay 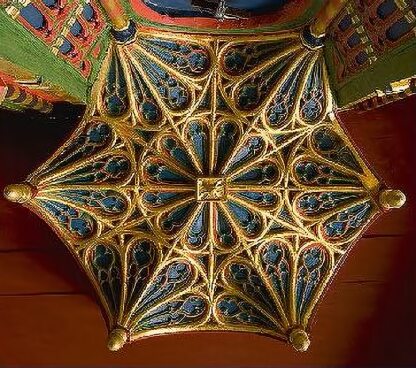 The present church was built by King Edward III who was also responsible for the building of a college as a cloister on the church's southern side.

After building work was completed in around 1430, a parish church was added to the western end of the collegiate church with work beginning in 1434. The parish church remains today.

The chancel was demolished by John Dudley, 1st Duke of Northumberland after the college was dissolved in 1553 during the Dissolution of the Monasteries. A grammar school was erected in its place which lasted until 1859.

Memorials to members of the House of York include those of:-

Tomb of Edward of Norwich, 2nd Duke of York 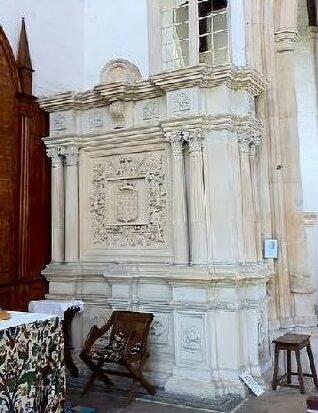 The eldest son of Edmund of Langley, 1st Duke of York, (the 4th son of Edward III) and his first wife, Isabella of Castile, the second daughter of Peter the Cruel of Castille and his favourite mistress, Maria de Padilla. Edward of York was married twice, firstly to Beatrice of Portugal and later to Philippa de Mohun. He commanded the right-wing at the great English victory of Agincourt, where he was killed on 25 October 1415, the highest-ranking English casualty in that battle. His death has been variously attributed to a head wound and to being 'smouldered to death' by 'much heat and pressing'

The son of Richard, Earl of Cambridge, and Anne Mortimer, and nephew of Edward, 2nd Duke of York. Laid formal claim to the throne in the reign of Henry VI, which led to the civil war later known as 'the Wars of the Roses. The Duke of York was killed at the Battle of Wakefield in 1460 and was buried at Pontefract, his head was put on a pike by the victorious Lancastrian armies and displayed over Micklegate Bar at York, wearing a paper crown. His remains were later moved to Church of St Mary and All Saints by his son King Edward IV.

Wife of Richard Plantagenet, 3rd Duke of York, and the mother of Edward IV and Richard III. Cecily Neville was the daughter of Ralph, the 1st Earl of Westmorland, and Joan Beaufort, Countess of Westmorland. Her maternal grandparents were John of Gaunt, the 1st Duke of Lancaster, and Katherine Swynford. She survived her husband and sons to die in 1495, during the reign of the first Tudor king, Henry VII. Her will requested that she was buried beside him.

The second surviving son of Richard, Duke of York and Cecily Neville, Edmund of Rutland was killed at the age of seventeen in the aftermath of the Battle of Wakefield in 1460. He had fought in the battle at the side of his father, on realising the battle was lost, he fled the field and was captured and stabbed by the Lancastrian Lord Clifford.

The brightly painted pulpit of the Church 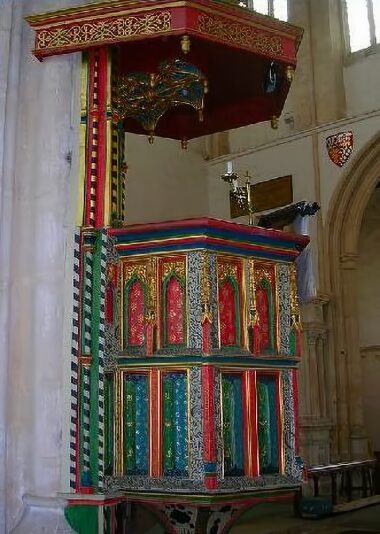 In 1476 an elaborate ceremony was carried out in the church when the bodies of Richard, Duke of York and his son Edmund, Earl of Rutland, who had been buried in a humble tomb at Pontefract, were transferred to Fotheringhay by Edward IV:-

'on 24 July the bodies were exhumed, that of the Duke 'garbed in an ermine furred mantle and cap of maintenance, covered with a cloth of gold' lay in state under a hearse blazing with candles, guarded by an angel of silver, bearing a crown of gold as a reminder that by right the Duke had been a king. On its journey, Richard, Duke of Gloucester, with other lords and officers of arms, all dressed in mourning, followed the funeral chariot, drawn by six horses, with trappings of black, charged with the arms of France and England and preceded by a knight bearing the banner of the ducal arms. Fotheringhay was reached on 29 July, where members of the college and other ecclesiastics went forth to meet the cortege. At the entrance to the churchyard, King Edward waited, together with the Duke of Clarence, the Marquis of Dorset, Earl Rivers, Lord Hastings and other noblemen. Upon its arrival the King 'made obeisance to the body right humbly and put his hand on the body and kissed it, crying all the time.' The procession moved into the church where two hearses were waiting, one in the choir for the body of the Duke and one in the Lady Chapel for that of the Earl of Rutland, and after the King had retired to his 'closet' and the princes and officers of arms had stationed themselves around the hearses, masses were sung and the King's chamberlain offered for him seven pieces of cloth of gold 'which were laid in a cross on the body.' The next day three masses were sung, the Bishop of Lincoln preached a 'very noble sermon' and offerings were made by the Duke of Gloucester and other lords, of 'The Duke of York's coat of arms, of his shield, his sword, his helmet and his coursers on which rode Lord Ferrers in full armour, holding in his hand an axe reversed.' When the funeral was over, the people were admitted into the church and it is said that before the coffins were placed in the vault which had been built under the chancel, five thousand persons came to receive the alms, while four times that number partook of the dinner, served partly in the castle and partly in the King's tents and pavillions. The menu included capons, cygnets, herons, rabbits and so many good things that the bills for it amounted to more than three hundred pounds. Thomas Whiting, Chester Herald.

Edward IV built a magnificent shrine in the choir over the tombs of his father and brother, and completed the works of the college, including the cloister. The church contains a superb fifteenth century painted pulpit which was donated by Edward, it is decorated by the royal arms, flanked by a bull for George of Clarence and a silver boar for Richard of Gloucester. The pulpit stands on a pedestal against the first pier of the north arcade. It has a hexagonal, fan vaulted canopy. The pulpit has now been restored to its original colours and is richly carved and ornamented.

Tomb of Edward of Norwich, 2nd Duke of York 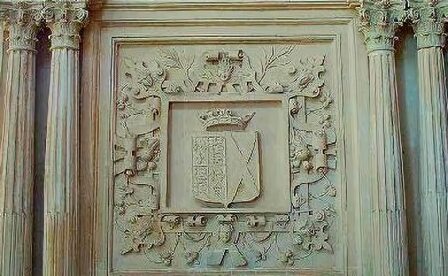 Following the destruction of the church choir in the sixteenth century, Queen Elizabeth I visited Fotheringhay in 1566, she saw the desecrated and shattered tombs among the ruins of the collegiate quire. Expressing disgust at this lack of respect, she ordered the removal of the York tombs and erected the present monuments to the third Duke and his wife around the altar.

The church windows originally contained images and icons reflecting its history as the burial place of The House of York. Few fragments of these have survived to the present day, some are now installed in the upper room of the Tower. The York window, dedicated in 1975, was a gift from the Richard III Society. It incorporates the arms of Richard III, his Queen, Anne Neville, the Founders of the Collegiate Church, Benefactors and their wives.

White Roses are placed annually in the church on the birthday of Richard III, by the Richard III Society.

The nearby mound of Fotheringhay Castle, to the east of the village of Fotheringhay next to the river, was once an imposing Norman stone motte and bailey fortress, the castle was the birthplace of Richard III in 1452 and also withessed the trial and execution of Mary, Queen of Scots in 1587.

Mary's son, James I, on ascending the English throne, ordered that the Castle at Fotheringay, the tragic scene of his mother's execution, be razed to the ground. The antiquarian, Sir Robert Cotton, incorporated the Great Hall into his manor but the building was destroyed in the eighteenth century. Only a mound, where purple thistles are said to grow, remains today. A plaque commemorating the death of Mary was placed there in 1913 by a historical society. A plaque commemorating the birth of Richard III at the castle was placed there in the twentieth century by the Richard III society.