Richard Woodville, first of the Woodville family to step out onto the pages of history, was born in 1405 at Maidstone in Kent, the son of Richard Wydeville, a soldier and politician and Joan Bittlesgate, the daughter of Thomas Bittlesgate of Knightstone. Wydeville himself was the son of John Wydeville, a Northamptonshire landowner.

Richard was chamberlain to John, Duke of Bedford, (a younger brother of King Henry V) On the death of the Duke of Bedford, he secretly married the widowed Duchess Jacquetta, news of which caused a scandal at the time. Jacquetta of Luxembourg (1415/1416 - 30 May 1472), whose social standing was far above her new husband's, was the elder daughter of Peter I, Count of Saint-Pol, Conversano and Brienne and his wife Margaret de Baux and was descended from Beatrice of England, daughter of King Henry III of England and Eleanor of Provence. The marriage produced 14 children:- 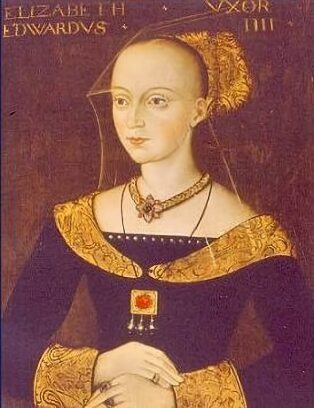 Woodville participated in the French wars in the reign of Henry VI and was created Baron Rivers on 9 May 1448. When the dynastic strife known as the Wars of the Roses broke out, Richard initially give his support to the House of Lancaster, but switched sides after the Battle of Tewkesbury when the Lancastrian cause was all but lost and accepted the new Yorkist regime under King Edward IV. On 1 May 1464, Edward secretly married his daughter Elizabeth, the widow of Sir John Grey of Groby who had been killed at the Second Battle of St Albans in 1461. Edward created his father-in-law Earl Rivers in 1466, appointed him Lord High Treasurer in March 1466 and Constable of England on 24 August 1467.

Edward IV arranged advantageous marriages to the nobility for his wife's many needy siblings, the growing power of the Woodville clan was distasteful to the old nobility, and especially so to the proud and haughty Richard Neville, Earl of Warwick, who regarded Richard Woodville as an upstart. Early in 1468, the Rivers estates were plundered by Warwick's supporters, and the open war of the following year was aimed at destroying the power of the Woodvilles. After the Yorkist defeat at the Battle of Edgecote Moor on 26 July 1469, Rivers and his second son John were taken prisoner by Warwick at Chepstow. Following a show trial, they were beheaded at Kenilworth on 12 August 1469. His eldest son Anthony succeeded him as Earl Rivers.

Shortly after Woodville's execution, Warwick's follower, Thomas Wake, accused his widow Jacquetta of witchcraft. Wake brought a lead image to Warwick Castle, "made like a man of arms . . . broken in the middle and made fast with a wire," and alleged that Jacquetta had fashioned it to use in sorcery. He claimed that John Daunger, a parish clerk in Northampton, could attest that Jacquetta had made two other images, one for the king and one for the queen. When Warwick was forced to release the king from his custody, Jacquetta was cleared by Edward's council of the charges on January 19, 1470. Jacquetta Woodville died on 30 May 1472. 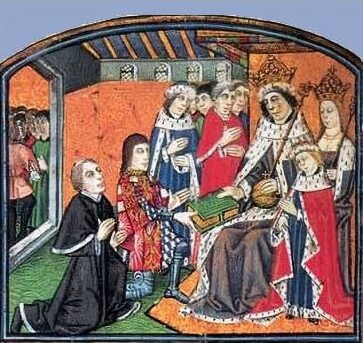 In 1473, King Edward IV appointed Anthony Woodville, 2nd Earl Rivers as Governor of the household of his heir, Edward, Prince of Wales. Rivers went with the prince to Ludlow Castle in the Welsh Marches. When King Edward died suddenly in 1483, the Queen, his sister, sent instructions to Rivers to bring her son, now King Edward V, to London under an armed guard. Anthony was intercepted at Stony Stratford by Richard, Duke of Gloucester, who arrested the Earl, along with his nephew Sir Richard Grey, the young king's half-brother. Both were imprisoned and then beheaded at Pontefract Castle on 25 June 1483 to clear the duke's path towards claiming the throne as Richard III. Anthony Woodville was succeeded as Earl Rivers by younger his brother, Richard.

Thomas Grey was the son of Queen Elizabeth Woodville and her first husband, John Grey of Groby and was born in 1453 at Groby Old Hall in Leicestershire. He was created Marquess of Dorset in 1475 by Edward IV and made two advantageous marriages to wealthy heiresses - his first wife being Anne Holland (daughter of the King's sister, Anne of York, Duchess of Exeter), and his second wife, Cecily Bonville, 7th Baroness Harington, by whom he had 14 children:-

Late in the summer of 1483, hearing word of rumours of the murder of both of his young half-brothers, Edward V and Richard, Duke of York, Grey joined the Buckingham rebellion against Richard III. When the rebellion failed he fled to Brittany to join the Lancastrian pretender Henry Tudor, the future Henry VII, who pledged to marry his half-sister Elizabeth of York. However, just before Henry leaving France to engage in his invasion of England in August 1485, Grey heard that his mother, Elizabeth Woodville had come to terms with Richard, and he was persuaded to desert Tudor. He was intercepted at Compiègne en-route to England and confined to Paris, as security for the repayment of a loan made to Henry Tudor by the French.

Henry VII, thereafter suspicious of Grey, did not allow him to recover his former influence. He was imprisoned in the Tower of London in 1487 during the Lambert Simnel rising and not released until after the Battle of Stoke Field. Thomas Grey, Marquess of Dorset, died in London on 20 September 1501, aged around 48, and was buried in the collegiate church of Astley, Warwickshire. His widow later married his cousin, Henry Stafford, later Earl of Wiltshire.