The tumultuous life of Elizabeth Woodville began around 1437 at the manor Grafton Regis in Northamptonshire. Elizabeth was the daughter of Richard Woodville, 1st Earl Rivers, and his wife, the Jacquetta of Luxembourg. Her parent's marriage had been an unconventional one. Her father was the son of another Richard Wydeville, chamberlain to John of Lancaster, Duke of Bedford. Her mother, Jacquetta was the elder daughter of Peter I, Count of St Pol, Conversano and Brienne and the widow of John of Lancaster, the younger brother of Henry V. Elizabeth may have been appointed a maid of honour to Queen Margaret of Anjou, the wife of Henry VI, in 1445 when she was about eight years old. 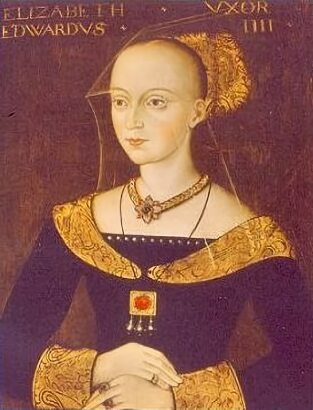 In around 1452, Elizabeth was married to Sir John Grey of Groby, two sons were born from the marriage, Thomas Grey (later Marquess of Dorset) (c. 1455 – 1501) and Sir Richard Grey (c. 1460 –1483). Sir John Grey was killed at the Second Battle of St Albans in 1461, fighting for the Lancastrian cause, and her sons were deprived of their inheritance of Bradgate. 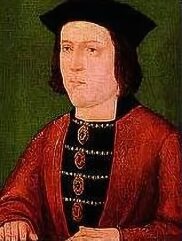 She is said to have met her second husband, the new King Edward IV at Grafton, where legend records that she waited beneath an oak tree to confront the king, who was hunting in the region, for the return of her sons lands. Edward, a notorious womaniser, was smitten and tried to make her his mistress, but she held out for marriage. The pair were secretly married at Grafton 1st May, 1464.

Edward made the marriage public on Michaelmas day, 1464, at Reading Palace, to the great annoyance of his mother Cecily Neville and Richard, Neville Earl of Warwick, otherwise known as 'Warwick the Kingmaker who was at the time arranging an advantageous political match for the king to Bona of Savoy. The new queen's eldest daughter, Elizabeth of York, was born at Westminster palace about five months later, the quarrel in the House of York temporarily patched up, Warwick stood as godfather to the new princess. Her godmothers were her two grandmothers, Cicely Duchess of York, and Jacquetta Duchess of Bedford. Elizabeth was crowned Queen of England on May 16, 1465, at Westminster Abbey.

The new queens large and needy family of brothers and sisters were married by Edward IV into some of the noblest families in England. Her sisters were married to the sons of the earls of Kent, Essex and Pembroke, Catherine Woodville, was married to the queen's 11-year-old ward Henry Stafford, 2nd Duke of Buckingham. Her 20-year-old brother John Woodville was scandalously wed to the sixty-year-old Katherine Neville, the wealthy Duchess of Norfolk, the daughter of Ralph Neville, 1st Earl of Westmorland and widow of John Mowbray, 2nd Duke of Norfolk.

Edward's brother, George, Duke of Clarence heartily disliked the new Queen. Warwick, who possessed influence over George and under whom he had been brought up, wished to arrange a marriage between him and his eldest daughter and co-heiress, Isabel. The King refused to sanction the match, in defiance of his brother, Clarence married Isabel at Calais.

Elizabeth Woodville and her daughters 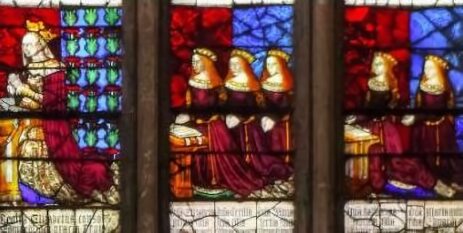 Further ill-feeling and suspicion being engendered on both sides culminated in Warwick and Clarence's open revolt. Edward's forces were defeated by them at the Battle of Edgecote Moor in 1469, and the king himself captured, Warwick attempted to rule England in Edward's name. During her husband's temporary fall from power, Elizabeth had took sanctuary in Westminster Abbey, where she gave birth to the Yorkist prince, Edward. Her marriage to Edward IV produced a total of ten children, including another son, Richard, Duke of York. Five daughters also survived to adulthood.

Warwick and Clarence had parliament disinherit Edward IV and his heirs, they claimed the king was not the true son of the Duke of York, but the product of Duchess Cecily's liaison with an archer named Blackburn, who was in the employ of the Duke of York when he was stationed in France.

Edward's brother-in-law, Charles, Duke of Burgundy, was initially unwilling to offer him support, however, a French declaration of war on the province forced his hand and Edward was equipped with a small army, in an attempt to regain the throne. Following the example of Henry of Bolingbroke some seventy years previously, Edward, a daring military commander, at first claimed he had returned to England merely to claim his duchy of York. The city of York, however, refused to admit him but supporters flocked to his banner as he proceeded to march south. When Clarence, Shakespeare's 'quicksand of deceit', demoted again to second in line to the throne, realised he had gained nothing from his abandonment of his brother, he promptly switched sides, rejoining Edward's forces at the Battle of Barnet, to ensure that he, Clarence, was on the winning side. The Lancastrian forces were defeated in the ensuing battle, which was fought in thick fog and the mighty Warwick himself slain whilst fleeing the battlefield. 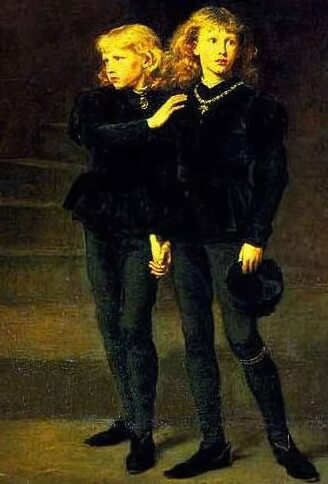 Elizabeth fled to sanctuary with her younger son Richard, Duke of York and her daughters. The Duke of York was removed from his mother on the pretext that he was needed at his brother's coronation and sent to join Edward V in the Tower. After which Richard moved to take the throne himself. On 25 June 1483, an act of parliament, known as the Titulus Regius, declared Elizabeth's children illegitimate on the grounds that Edward had made a previous pre-contract to marry Lady Eleanor Butler, which was considered a legally binding contract that rendered any later marriage contract invalid. One source, the Burgundian chronicler Philippe de Commines, says that Robert Stillington, Bishop of Bath and Wells, claimed to have carried out the ceremony between Edward and Eleanor. The act also contained charges of witchcraft against Elizabeth, but gave no details and had no further repercussions. Richard of Gloucester was then crowned King Richard III.

The two young princes had been seen playing in the Tower gardens at various times until then. Gradually, they began to appear less frequently. The last person to see them alive was Edward V's physician, Dr Argentine, who had attended him at the Tower and found him in a state of abject melancholy. Click for a full account of the fate of the Princes in the Tower

Elizabeth entered into a conspiracy to free her sons, Henry Stafford, Duke of Buckingham, a close ally of Richard, joined the conspiracy, but announced the boys had met their end in the tower. In secret negotiations with Lady Margaret Beaufort, it was agreed that Margaret's son, the surviving Lancastrian claimant to the throne, Henry Tudor, Earl of Richmond should marry Elizabeth's eldest daughter, Elizabeth of York. On 1st March 1484, she and her daughters emerged from sanctuary after Richard publicly swore an oath that her daughters would not be harmed or molested and that they would not be imprisoned in the Tower of London.

Henry Tudor invaded England in 1485 and defeated Richard in battle at Bosworth Field, becoming King Henry VII, the first of the Tudor dynasty. To satisfy Yorkist supporters and bolster his claim to the throne he kept his promise and married Elizabeth of York and had the Titulus Regius revoked. Elizabeth was accorded the title and honours of a queen dowager and stood as godmother at the christening of her grandson, Arthur Tudor, the new Prince of Wales.

Opinions differ as to the reason why Elizabeth spent her last five years living at Bermondsey Abbey. With some historians arguing that Henry VII forced her retreat from the Court, while others present evidence indicating she was planning a religious life as early as July 1486.

At the Abbey, Elizabeth received a pension of £400 and small gifts from the King. She was present at the birth of her second grandchild, Margaret Tudor, later to be Queen of Scots, at Westminster Palace in November 1489. Her daughter, the new Queen rarely visited her, although her younger daughter Cecily, Viscountess Welles is known to have done so.

Elizabeth died at Bermondsey Abbey on 8 June 1492. Under the terms of her will, which reveals that she died destitute of personal property, she was provided with a simple funeral at Windsor Castle on 12th June 1492. Her daughters Anne (the future Countess of Surrey), Catherine (the future Countess of Devon) and Bridget, a sister at Dartford Priory, attended the funeral, the Queen, who was awaiting the birth of her fourth child, did not attend. Elizabeth, at her request, was buried in the same chantry as King Edward IV in St George's Chapel at Windsor. Her son, Thomas Grey, Marquess Dorset, paid the cost of the funeral.

The children and grandchildren of Edward IV and Elizabeth Woodville