The Battle of Tewkesbury

The Battle of Tewkesbury was a decisive battle of the Wars of the Roses which resulted in crushing the Lancastrian cause and securing the throne for the Yorkist King Edward IV.

Edward IV owed his position as King of England largely to the support of his powerful cousin, Richard Neville, Earl of Warwick, known as the 'Kingmaker. The two became estranged when Edward married Elizabeth Woodville, the widow of an obscure Lancastrian knight, in 1464. Warwick resented the fact that Edward placed many of his new queen's obscure relations in powerful positions. The exasperated Warwick joined forces with Edward's ambitious younger brother George, Duke of Clarence, and rose in rebellion in an attempt to make George king. Edward was briefly imprisoned, but later released and there followed a temporary respite in the feuds which rent the House of York. However, within a year, Edward, suspecting Warwick and George of fresh treachery forced them to seek refuge in France.

The embittered Warwick formed an alliance with his erstwhile enemy, the Lancastrian Queen, Margaret of Anjou and led an invasion on her behalf, but met his end in the battle against Edward at Barnet on 14th April 1471. Margaret of Anjou and her son Edward, the Lancastrian Prince of Wales set sail for England on 24th March and landed the day Barnet was fought to learn the disastrous news of Warwick's defeat. She marched her forces to join with the Lancastrians in Wales, led by Jasper Tudor, the half-brother of Henry VI, with Edward IV, aware that he must strike swiftly to contain the threat, in pursuit.

On 3rd May, a very hot day, the weary Lancastrian forces pitched camp for the night at Tewkesbury. King Edward forced his army on in attempt to halt Margaret's progress before she reached Wales and reinforcements, finally stopping some 3 miles from the Lancastrians forcing them to meet him in battle.

Plan of the battle 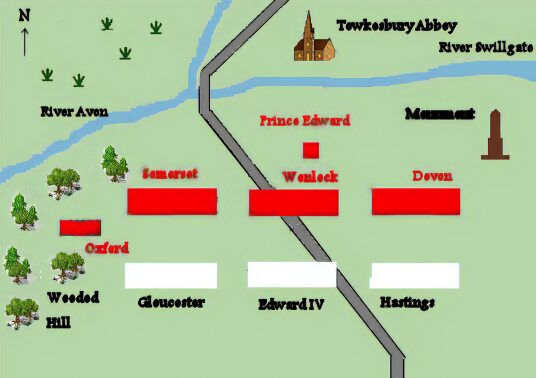 At daybreak on 4 May, the Lancastrians, numbering around 6,000, adopted a defensive position a mile south of the town of Tewkesbury. To their rear were River Avon and the Severn. Tewkesbury Abbey was just behind the Lancastrian centre.

The slightly outnumbered Yorkist army of around 5,000, was headed by Edward IV, who commanded the centre, keeping his wily brother Clarence by his side, his trusted youngest brother, the eighteen-year-old Richard, Duke of Gloucester, ( the future Richard III) led the vanguard, while Lord Hastings commanded the rear. To the left of the Yorkist army was a wooded park, where Edward positioned 200 mounted spearmen in the woods.

'Upon the morrow following, Saturday the 4th day of May, [the king] apparelled himself, and all his host set in good array; ordained three wards; displayed his banners; did blow up the trumpets; committed his cause and quarrel to Almighty God, to our most blessed lady his mother, Virgin Mary, the glorious martyr Saint George, and all the saints; and advanced directly upon his enemies; approaching to their field, which was strongly in a marvellously strong ground plight [placed], full difficult to be assailed'

The Yorkists advanced on the Lancastrian position, showering the Lancastrian forces with fearsome volleys of arrows and shot. In an attempt to outflank Edward, the Duke of Somerset led a force to attack his left flank.'In the front of their (the Lancastrian) field were so evil lanes, and deep dykes, so many hedges, trees and bushes, that it was right hard to approach them near, and come to hands: but Edmund, called Duke of Somerset, having that day the vaward, whether it was for that, he and his fellowship were sorely annoyed in the place where they were, as well with guns-shot, as with shot of arrows, which they would nor durst abide, or else, of great heart and courage, knightly and manly advanced himself with his fellowship, somewhat aside-hand the king's vaward, and, by certain paths and ways therefore afore purveyed, and to the king's party unknown, he departed out of the field, passed a lane, and came into a fair place or close, even afore the king where he was embattled and, from the hill that was in that one of the closes, he set right fiercely upon th'end of the king's battle.

The Yorkists resisted beating back Somerset's attack. The 200 spearmen which Edward had earlier positioned in the woods attacked Somerset from his own exposed right flank and rear. Somerset's forces, routed, attempted a desperate escape across the Severn. Most were slaughtered as they fled. The meadow astride the Colnbrook leading down to the river still retains the name "Bloody Meadow"

Memorial to Edward, the Lancastrian Prince of Wales at Tewkesbury Abbey 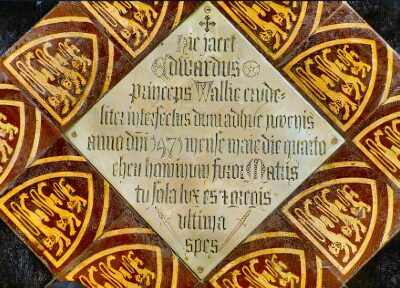 The furious Somerset galloped back to the Lancastrian lines and rode up to Wenlock, a former Yorkist, who commanded the centre and demanded to know why he had failed to provide support and without waiting for a reply, split his skull with a battleaxe in rage. Somerset then sought sanctuary at Tewkesbury Abbey.

Its morale collapsing, panic ensued and the rest of the Lancastrian army took to flight, many were killed by the pursuing Yorkists or drowned in the River Avon. No quarter was given, and as many as 2000 Lancastrians may have died.

Queen Margaret's son, the eighteen-year-old Edward, Prince of Wales, the last legitimate descendant of the House of Lancaster was killed either in battle or during its aftermath. There are several conflicting versions concerning how Prince Edward met his end, one states he was cut down as he fled north in the aftermath of the battle, another states that following the rout of the Lancastrians, a small contingent of men under the Duke of Clarence found Edward near a grove, where he was immediately beheaded on a makeshift block, despite pleas for mercy to his brother-in-law Clarence.

An alternative version was given by three other sources: The Great Chronicle of London, Polydore Vergil and Edward Hall, which was the version used by Shakespeare. This records, that Edward, having survived the battle, was taken captive and brought before King Edward IV who was with George, Duke of Clarence; Richard, Duke of Gloucester; and William, Lord Hastings. The king received the prince graciously and asked why he had taken up arms against him. The prince replied proudly and defiantly, "I came to recover my father's heritage." The king then struck the prince across his face with his gauntlet hand and those present with the king then suddenly stabbed Prince Edward with their swords.

Many of the Lancastrians took sanctuary in Tewkesbury Abbey. King Edward, who attended prayers in the abbey soon after the battle, permitted Prince Edward to be buried within the Abbey.

Two days later, Somerset and other leaders were dragged out of the Abbey and were ordered by Gloucester and the Duke of Norfolk, the Constable of England, to be put to death after perfunctory trials. Among them were Hugh Courtenay, younger brother of the Earl of Devon, and Sir John Langstrother, the prior of the military order of St. John. The abbey had to be re-consecrated a month after the battle, following the bloodshed within its precincts. Somerset and his younger brother John Beaufort, who had fallen in the battle, were buried at the Abbey. The House of Beaufort was thus extinct in the male line.

Queen Margaret, defeated at last by the death of the son she had fought so long and hard for, was taken captive by William Stanley at the end of the battle and imprisoned.

Henry VI met his death in the Tower of London, on the night of the Vigil of the Ascension, 21st -22nd May 1471. The demise of his son at Tewkesbury had sealed his fate. While Edward of Lancaster still lived, he had rendered the removal of Henry pointless. The demise of Henry VI and the Beaufort male line left Margaret Beaufort, and her son, Henry Tudor, as the senior representatives of the House of Lancaster.

The Battle Trail is a waymarked 1.5-mile trail around the battlefield of the Battle of Tewkesbury providing access to much of the battlefield with an interpretive panel telling the story of Bloody Meadow. A trail leaflet is available from Tewkesbury Tourist Office, which includes a map and an account of the battle. The abbey a memorial plaque to Prince Edward, and the graves of George Duke of Clarence and his wife Isabel Neville there is also a sword hilt and gemstone from the battle, and several medieval daggers. The back of the sacristy door is plated with armour said to have been found on the battlefield, although the validity of this claim is now questioned.

In the aftermath of Tewkesbury, Warwick's cousin, Thomas Neville, known as the Bastard of Fauconberg, (the illegitimate son of Sir William Neville, 1st Earl of Kent) having landed at Sandwich, sent ships up the Thames Estuary and gathered an army in Kent, he marched on London, halting outside the city at Southwark. London, however, refused to admit him and in retaliation, he burned Southwark and prepared a three-prong assault on the city. Artillery was placed in on the south bank of Thames, while the bulk of Fauconberg's army progressed upstream to attack London at Aldgate and Bishopsgate. A third party prong of the attack attempted to cross London Bridge. His bombardment failed to weaken the will of the Londoners. The assailants at London Bridge was beaten back. The attack on Bishopsgate was foiled by the Earl of Essex. At Aldgate, the rebels managed to force open the gate open but the city's defenders retaliated and all attempts to take the city met with failure.

Fauconberg and his army boarded his ships and returned to Kent. He then marched west to Kingston upon Thames in pursuit of Edward IV. Lord Scales, who had held London for Edward, sent word to Fauconberg that Edward was leaving England, which induced him to return to Blackheath. From there he travelled to Sandwich where he learned that Warwick's cause was lost. On his way to suppress Fauconberg, King Edward passed through London in triumph on 21 May, with the captive Queen Margaret beside him in a chariot. Edward marched on Sandwich and captured thirteen ships with most of Fauconberg's followers. Fauconberg escaped to Southampton, where he was captured by the King. He was then taken to the Middleham Castle in Yorkshire, and beheaded on 22 September 1471. His head was set on London Bridge, 'looking into Kentward'.

Margaret of Anjou was sent first to Wallingford Castle and later transferred to the more secure Tower of London; in 1472 she was placed in the custody of her former lady-in-waiting Alice Chaucer, Duchess of Suffolk, her beloved son's widow, Anne Neville, later married Richard, Duke of Gloucester, Edward IV's youngest brother. She remained a prisoner until she was ransomed by her kinsman, Louis XI, at the Treaty of Picquigny in 1475. The embittered ex-Queen retired to her native Anjou, dependent for a pension on Louis. She took up residence at the Chateau of Dampierre, she died there in August, 1482, aged fifty-three. She was buried in Angers Cathedral.