Lady Elizabeth Angela Marguerite Bowes-Lyon was born on 24th August 1900, during the reign of Queen Victoria. She was the youngest daughter of Claude Bowes-Lyon, 14th Earl of Strathmore and Kinghorne and Cecilia Cavendish-Bentinck, daughter of the Rev. Charles Cavendish-Bentinck and Louisa Burnaby. The location of her birth remains debatable, however, she was said to have been born she was born either at Belgrave Mansions, Grosvenor Gardens, or in a horse-drawn ambulance on the way to a hospital. Elizabeth was the ninth of ten children.

Elizabeth spent much of her childhood at St Paul's Walden and the fourteenth century Glamis Castle, the ancestral home of the Bowes- Lyon family in Scotland. The most famous legend connected with the castle is that of the Monster of Glamis, a hideously deformed child born to the family. In the legend, the monster was locked in the castle throughout his life and his rooms bricked up after his death. 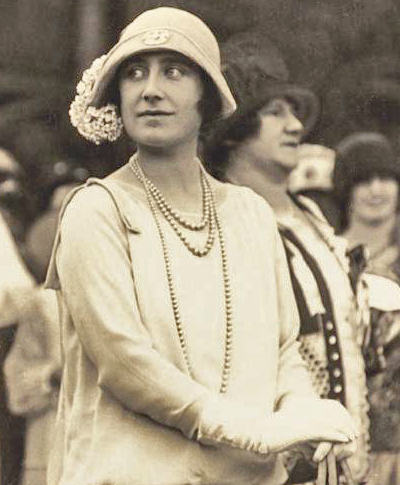 During the First World War, four of her brothers served in the armed forces. Her elder brother, Fergus, an officer in the 8th Battalion of the Black Watch Regiment, was killed in action at the Battle of Loos in 1915, he was recorded among the names of the missing on the Loos Memorial Another brother, Michael, was reported missing in action. He was to remain in a prisoner of war camp for the remainder of the war. Glamis Castle was converted into a convalescent home for wounded soldiers, which Elizabeth helped in the running of.

Prince Albert, Duke of York, a shy and diffident young man with a marked stammer, who was known as Bertie in his family, was the second son of King George V and Queen Mary of Teck. Bertie fell in love with Elizabeth and plucked up the courage to propose to Lady Elizabeth in 1921, but was turned down, as she was not willing to live in the spotlight of being a member of the royal family. Bertie however, remained smitten and his mother, Queen Mary of Teck, visited Glamis Castle to see Elizabeth herself after which she met with both his parent's ardent approval. At the same time, Elizabeth was courted by James Stuart, Albert's equerry, until he emigrated for employment in the American oil business. In February 1922, Elizabeth acted as a bridesmaid at the wedding of the princes' sister, Princess Mary, to Viscount Lascelles. The following month, Albert proposed again, but she refused for a second time. In January 1923, Bertie made a third attempt and to his delight Elizabeth at last accepted.

The couple were married on 26 April 1923, at Westminster Abbey. Elizabeth laid her bouquet at the Tomb of the Unknown Warrior on her way into the abbey, in memory of her brother Fergus. Thereafter she was styled Her Royal Highness The Duchess of York. The marriage produced two daughters, Princess Elizabeth Alexandra Mary was born in 1926 and Princess Margaret Rose in 1930/Their grandfather George V, was notably harsh with his children doted on both girls. 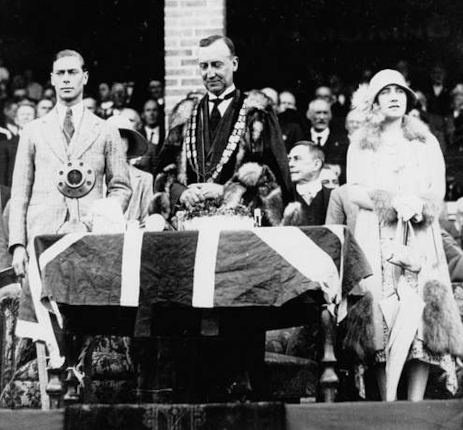 Bertie's marriage evoked the approval of his father, who strongly disapproved of his elder son David's bachelor playboy lifestyle. George V liked his new daughter-in-law, as did Bertie's mother. On his father's death in 1936, Bertie's elder brother David ascended the throne as Edward VIII, both the Duke and Duchess of York strongly disapproved of his relationship with the twice-divorced American Mrs Simpson. Being trained and brought up only to be an officer in the navy, Bertie was appalled by the abdication crisis and the responsibilities that it unexpectedly thrust upon him. "This is absolutely terrible, I'm quite unprepared for it," he complained miserably and in a panic to Louis Mountbatten, "I've never seen a state paper, I'm only a naval officer, it's the only thing I know about". He nevertheless accepted the awesome responsibility, "You can be assured " he stated, "that I will do my best to clear up the inevitable mess, if the whole fabric does not crumble under the shock and strain of it all." He chose to reign as George VI to mark the continuity with his father's reign. his coronation took place at Westminster Abbey on 12th May 1937.

During the Second World War, King George VI and Queen Elizabeth attempted to boost morale and visited his troops several times and he and the Queen visited factories and blitzed areas of London. Both George VI and Winston Churchill wanted to accompany the British troops on D-Day but was prevented from doing so as they were considered too great a risk.

After the war, the King's health, never robust, began to fail. A worrier and a heavy smoker, he underwent a major operation in 1949. By 1951 it became evident that he had contracted lung cancer, although this was never revealed to him. The last time the King appeared in public, on 31st January 1952, was to see off his daughter Elizabeth and her husband on a tour of Africa. It was remarked that the King looked haggard and gaunt as he stood waving at the airport. George VI died peacefully in his sleep at Sandringham House on 6th February 1952 and was buried at St. George's Chapel, Windsor.

Elizabeth, now styled as Queen Elizabeth, the Queen Mother, was deeply affected, to help cope with her grief she purchased and restored the remote Castle of Mey, on the north coast of Scotland, as a holiday home for herself. She also developed her interest in horse racing.

Princess Margaret's relationship with her father's equerry, R.A. F. pilot and Battle of Britain hero, Group Captain Peter Townsend, became public knowledge and the pair expressed a wish to marry. Group Captain Townsend was a divorcé, which, made him unacceptable in the eyes of the Church of England, of which her sister was head. The Princess was advised that if she went ahead with the marriage, she would be obliged to give up her royal title, her place in the line of succession and her Civil List allowance. After consultations with the Archbishop of Canterbury, the Princess decided she would not marry Group Captain Townsend.

The Princess married Antony Charles Robert Armstrong-Jones, the photographer son of Ronald Owen Lloyd Armstrong-Jones and his first wife, Anne Messel, later Countess of Rosse, on 6 May 1960 at Westminster Abbey. The ceremony was the first televised royal wedding. The Queen created her sister's husband Earl of Snowdon, in honour of his Welsh descent. The couple moved into Apartment 10, Kensington Palace before moving to Apartment 1A in early 1963 where they made their family home.

The Queen Mother had a warm relationship with all her six grandchildren but was particularly close to the eldest of them Charles, Prince of Wales. Her opinions sometimes differed from her son-in-law, Prince Philip. Philip decided to send Prince Charles to his old school of Gordonstoun in Scotland, he hoped the spartan regime there would toughen up his son. The sensitive Charles, however, loathed it, was desperately unhappy and referred to the school as "Colditz in Kilts". The Queen mother objected, she would have preferred him to go to Eton instead but was overruled.

In 1987, the Queen Mother faced criticism when the media revealed that two of her nieces, Katherine and Nerissa Bowes-Lyon, had both been committed to a psychiatric hospital because they were severely handicapped. However, Burke's Peerage had listed the sisters as dead, apparently because their mother, Fenella (Elizabeth's sister-in-law), "was 'extremely vague' when it came to filling in forms and might not have completed the paperwork for the family entry correctly". When Nerissa died the year before, her grave was originally marked with a plastic tag and a serial number. Elizabeth said that the news of their institutionalisation came as a surprise to her. 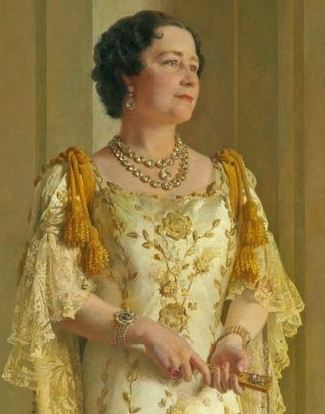 Elizabeth's younger daughter, Margaret's health began to deteriorate in the 1990s. In common with her father, George VI, she was a heavy smoker. She suffered the first of a series of strokes in 1998, while on holiday in Mustique. This was followed by further strokes in 2000 and 2001. Her last public appearances were made in a wheelchair. Princess Margaret died at the King Edward VII Hospital for Officers at the age of 71, following a severe stroke on the 9th of February 2002, her children Viscount Linley and Lady Sarah Catto were by her side. Her funeral was held on the 50th anniversary of her father's funeral. Princess Margaret had expressed a wish to be cremated, her ashes, at her request, were placed in the tomb of her father, King George VI in the King George VI Memorial Chapel in St. George's Chapel at Windsor Castle.

Just over a month after her daughter Margaret's death, Elizabeth died in her sleep at the Royal Lodge, at Windsor Great Park on 30 March 2002. Her surviving daughter, Queen Elizabeth II, was at her bedside. Having reached the age of 101 years and 238 days old she was the longest-lived member of the British royal family in history. Her flag-draped coffin was transported from Windsor to lie in state at Westminster Hall. Members of the household cavalry and other members of the armed forces stood guard at the four corners of the catafalque. At one point, her four grandsons Prince Charles, Prince Andrew, Prince Edward and Princess Margaret's son Viscount Linley stood guard as a mark of respect for their mutual grandmother. Elizabeth's funeral took place on 9 April, at Westminster Abbey.

The Queen Mother was laid to rest beside her husband George VI and younger daughter in St George's Chapel, Windsor Castle. At her request, the wreath that had lain on top of her coffin was placed on the Tomb of the Unknown Warrior, in a gesture that echoed her wedding-day tribute 79 years previously.