Prince Edward was born on 10 March 1964 at Buckingham Palace. He is the fourth and youngest child of Queen Elizabeth II and Philip, Duke of Edinburgh. He was baptised on 2 May 1964 at the private chapel at Windsor Castle by the Dean of Windsor and was given the names Edward Anthony Richard Louis. Both the Queen's great-grandfather, Edward VII and her uncle, the Duke of Windsor bore the name of Edward. His other three Christian names were for his godfathers, Anthony, Earl of Snowdon (Princess Margaret's husband) the Queen's cousin, Prince Richard of Gloucester (now the Duke of Gloucester) and Prince Louis of Hesse and by Rhine. 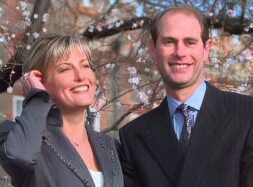 Prince was educated privately until the age of seven when he began attending Gibbs Pre-Preparatory School in Kensington, West London. He went on to follow Prince Andrew to Heatherdown Preparatory School near Ascot, Berkshire. Following in the footsteps of his father and his two elder brothers, Charles and Andrew, Edward was then sent to the spartan Gordonstoun School in Scotland.

His gap year was spent as a house master/ junior master at the Collegiate School, Wanganui, New Zealand. Edward entered Jesus College, Cambridge, reading history, where he obtained a BA degree in 1986. He embarked on a career in the armed forces, joining the Royal Marines as a trainee officer, but disliked life in the army and resigned the rigorous course having failed to complete his training in January, 1987, which occasioned much negative criticism from the media, along with suggestions in some quarters that he was gay.

Undeterred, and in a complete break with tradition, Edward embarked on a career in the theatre, working for Andrew Lloyd-Webber's Really Useful company. In 1993 he formed his own company, Ardent Productions, under the name of Edward Windsor. The company dealt generally with films and documentaries, mainly about the Royal family, which lead to further criticism that Edward was using his royal connections for his personal gain.

The wedding of Edward and Sophie 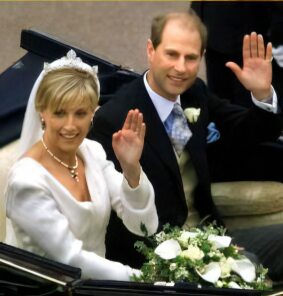 When his nephew, Prince William, started at St. Andrew's University in Scotland, a television crew from Ardent filmed the Prince, breaking the agreement made between the royals and the media regarding William's privacy and causing friction with his elder brother Charles and further embarrassing media criticism in the tabloid newspapers. In 2002, Edward was encouraged to stand down from his position as Managing Director of Ardent Productions, to concentrate on his public duties. The company had reported large losses for every year but one.

In January 1999, Edward's engagement to his long term girlfriend, Sophie Rhys-Jones, the daughter of Christopher Rhys-Jones, a tyre salesman and Mary O'Sullivan, was announced. Their marriage took place at St. George's Chapel, Windsor Castle on 19 June 1999. The Queen created Prince Edward Earl of Wessex and Viscount Severn before the occasion. The title had not been used for over nine hundred years, the previous holder of the title Earl of Wessex had been Harold Godwineson, later Harold II, who was killed at the Battle of Hastings in 1066. Viscount Severn was chosen because of Sophie's family's links with the Welsh borders.