The second child and only daughter of Princess Anne and Captain Mark Phillips, Zara Phillips was born on 15 May 1981. She was baptized, Zara Anne Elizabeth on 27th July of that year. Prince Charles has been said to have suggested the name Zara, which is Greek and means bright as the dawn. The Queen offered to bestow titles on both of Princess Anne's children by letters patent, but Anne declined the offer, wishing them to lead as normal lives as possible and to shield them from media interest.

Zara has a brother Peter Phillips and two half sisters, Felicity Tonkin, born in 1985 as a result of her father's extra-marital relationship and Stephanie Phillips, the child of her father's second marriage. Zara was educated at Port Regis Preparatory School in Shaftesbury, Dorset later attending Gordonstoun, the Scottish school also attended by her grandfather, uncles and brother. After finishing her secondary education she had a gap year, three months of which were spent in Australlia and New Zealand, where some of her wilder antics were eagerly followed by the paparazzi. Zara later enrolled at Exeter University and qualified as a physiotherapist. 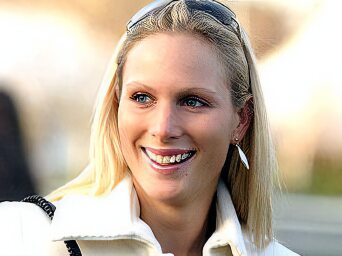 Like her mother, Zara is an accomplished horsewoman, she finished second in the Burghley Horse Trials in 2003. Her hopes of competing in the 2004 Olympics were dashed when her horse, Toytown, suffered a leg injury in 2003. Zara went on to win the Individual European Eventing Championship in 2005.

Said to be very close to her cousin Prince William, Zara, an attractive blonde, with a strong resemblance to her mother, Princess Anne, can be something of a rebel and once had her tongue pierced. She had a long and turbulent on-off relationship with jockey, Richard Johnson and their frequent and sometimes violent arguments were closely followed by the press, the couple split up in November 2003. Her current partner, whom she lives with, is rugby player, Mike Tindall. She currently carries out royal duties on behalf of the Royal Family.

Zara won two gold medals in the European Eventing Championships, displaying superb horsemanship and echoing her mother's victory 31 years earlier. In December 2006, again following in her mother's footsteps, she was named Sports Personality of the Year, Zara is said to have commented " To win this is absolutely amazing."

On 2nd December 2010, Buckingham Palace announced Zara's engagement to rugby union player Mike Tindall, who plays for Premiership side Gloucester and the England national team. The pair met during England's Rugby World Cup-winning campaign in Australia in 2003. Their wedding was taking place on 30th July 2011 at the Canongate Kirk in Edinburgh. Zara wore a dress by Stewart Parvin dress and the Meander tiara, which belonged to her great-grandmother, Princess Alice of Battenberg, who became Princess Andrew of Greece and Denmark and the mother of Prince Phillip.

Zara gave birth to the couple's first child, the Queen's fourth great-grandchild, Mia Grace Tindall on 17th January, 2014, at the Gloucestershire Royal Hospital. The name was announced by her father, rugby player-coach Mike Tindall on Twitter. Mia, who weighed 7lbs 12oz (3.5kg) at birth is sixteenth in the line of succession to the throne.

Sadly two miscarriages followed. A second daughter, Lena Elizabeth was born on 18 June 2018 at the Stroud Maternity Hospital and finally, Zara gave birth to a son, named Lucas Philip, on 21 March 2021 at the family home, Gatcombe Park in Gloucestershire.