Reginald Pole was born on 12 March 1500 at Stourton Castle, in Staffordshire. He was the second son of Sir Richard Pole and Margaret Pole, Countess of Salisbury. The Countess was a first cousin of the Queen, Elizabeth of York, she was the daughter of George, Duke of Clarence, and Isabel Neville, making her son a great-grandson of Richard Neville, 'Warwick the King Maker' and Richard Plantagenet, Duke of York. His father Richard Pole was of Welsh descent, the son of Sir Geoffrey Pole and Edith St John. Edith was the half-sister of Lady Margaret Beaufort, mother of King Henry VII. 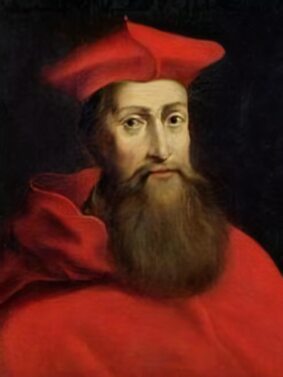 Reginald was educated at at the school of the Charterhouse at Sheen and at Magdalen College, Oxford from where he graduated with a BA on 27 June 1515. In February 1518, He was granted the deanery of Wimborne Minster, Dorset by his second cousin, King Henry VIII after which he became Prebendary of Salisbury and Dean of Exeter in 1527. Pole was also a canon of York. Of slender build and medium height, Pole had light brown hair and was said to have a gentle expression.

In 1521 Pole went to the University of Padua, from where he corresponded with the humanist Erasmus, his studies there were partly paid for by Henry VIII. He returned home in July 1526, the king, eager to divorce his first wife, Catherine of Aragon to marry Anne Boleyn, offered him the Archbishopric of York or the Diocese of Winchester if he would support his divorce. Pole, however, would not support the king in this aim and went into self-imposed exile in 1532. Reginald sent Henry a copy of his treatise 'Pro ecclesiasticae unitatis defensione' which strongly denounced the king's policies, his position on the marriage of a brother's wife, and the Royal Supremacy. To add insult to injury, he also urged the monarchs of Europe to depose Henry.

Henry, incensed, wrote to the Countess of Salisbury, who sent a reproving letter to her son. The king, ruthless when crossed and unable to strike out at Pole, exacted a terrible revenge on his family. His brother, Sir Geoffrey Pole, with whom he had been in correspondence, was arrested in August 1538. When questioned, Sir Geoffrey revealed that his eldest brother, Henry Pole, Lord Montagu, and his cousin, Henry Courtenay, Marquess of Exeter, had been party to his correspondence with Reginald. Montagu, Exeter, and the aged Countess of Salisbury, last of the Plantagenets, were all arrested in November 1538, on charges of treason, They were imprisoned in the Tower and Reginald Pole was attainted. In January 1539, Geoffrey Pole received a pardon, while Montagu and Exeter were tried and executed for treason.

In May 1539, Henry, Margaret, Exeter and others were attainted and sentenced to death. As part of the evidence for the Bill of Attainder, Thomas Cromwell produced a tunic bearing the Five Wounds of Christ, symbolising Margaret's support for Roman Catholicism and the rule of her son Reginald and the king's Catholic daughter Mary. Margaret was questioned by William Fitzwilliam, and Thomas Goodrich, Bishop of Ely. They reported to Thomas Cromwell that although they had "travailed with her" for many hours she would "nothing utter", and they were forced to conclude that either her sons had not included her in their plans, or she was "the most arrant traitress that ever lived." The Countess was held in the Tower of London along with her grandson Henry (Montagu's son), and Edward Courtenay, Exeter's son. 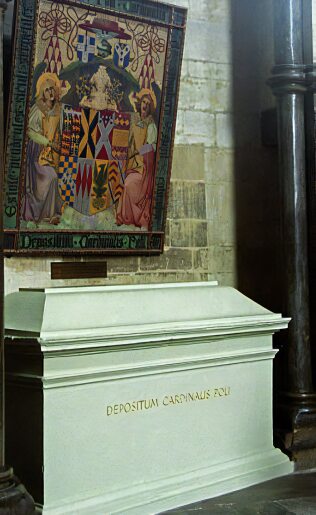 Margaret Pole was finally executed in 1554. For two years, Margaret suffered much from cold and neglect in the Tower. On the morning of 27 May 1541, the now frail 67-year-old was informed she was to die within the hour, she replied boldly that no crime had been imputed to her. She was taken from her cell to Tower Green where a low wooden block had been prepared. She proudly refused to lay her head on the block and was dragged to it and forced down. As she struggled, the inexperienced executioner described as 'a wretched and blundering youth struck, his first blow made a gash in her shoulder rather than her neck. Ten additional blows were required to complete the execution. A second account relates how she managed to escape from the block and that she was hewn down by the executioner as she ran. Pole is known to have said that he would "...never fear to call himself the son of a martyr". She was later regarded by Catholics as such and was beatified in 1886 by Pope Leo XIII. It was expected that Margaret's young grandson, Henry Pole, would follow her to the block, but Henry VIII was unwilling to risk unfavourable public opinion and so he was deprived of a tutor and imprisoned in the Tower until his death, possibly from starvation, in 1542 or later.

Much to the chagrin of Henry VIII, Reginald Pole was made a cardinal by Pope Paul III in 1536, he was also appointed Papal Legate to England in February 1536/1537. The death of Henry VIII's staunchly Protestant son Edward VI on 6 July 1553 saw the his Catholic daughter Mary I ascend to the throne of England. Cardinal Pole wrote to the new queen congratulating her on her accession and returned from exile in 1554 to receive the kingdom back into the Roman Catholic fold. It was suggested that Pole should marry the queen, but neither party seemed eager about the idea and Mary instead married her maternal cousin, Phillip of Spain. Pole negotiated a papal dispensation allowing the new owners of confiscated former monastic lands to retain them, and in return, Parliament enabled the Revival of the Heresy Acts in January 1555.

On 13 November 1555, Thomas Cranmer was deprived of the See of Canterbury and Pole was consecrated as Archbishop of Canterbury in March 1556. In addition, he was the Queen's chief minister and adviser. In 1555, Queen Mary began burning Anglicans for heresy, and some 220 men and 60 women were executed before her death in 1558 for which she became known to history as 'Bloody Mary'. Paul IV, elected as Pope in 1555, was a bitter enemy of Catholic humanism and of the attempts of men like Pole to soften the teachings of Catholicism to win back converts to Protestantism. Further annoyed by Mary's support for her husband, Philip II, in his conflicts with the holy see, Pope Paul cancelled Pole's legatine authority and then attempted to recall him to Rome to face investigation for heresy in his writings. The queen refused to let Pole leave England, but he accepted his suspension from office.

Reginald Pole died at Lambeth Palace in London, during an epidemic of influenza on 17 November 1558, at about 7 pm, only twelve hours after Queen Mary's death. He was buried on the north side of Corona at Canterbury Cathedral.