Tintagel Castle Medieval fortress which stands on a Legendary Dark Age site Spectacular and atmospheric, thirteenth century Tintagel Castle, Cornwall, stands on the site of an earlier Dark Age fort, reputed to have been the birthplace of the legendary King Arthur. The castle stands isolated on a rocky windswept headland rising around 100 metres from the sea, which is linked to the mainland by an isthmus of rock and surrounded on three sides by the Atlantic. 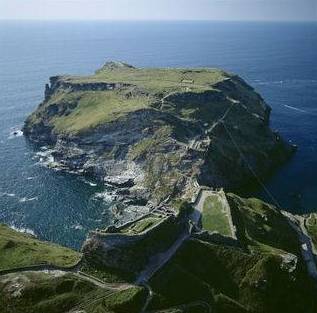 The present Medieval castle was built in 1233 by Richard Plantagenet, Earl of Cornwall, the younger brother of King Henry III (1216-73). From 1225, when he was sixteen years old, he was created Earl of Cornwall by his brother the king. The rich revenues from Cornwall made Richard one of the wealthiest men in Europe, he exchanged the land of Merthen (originally part of the manor of Winnianton) with Gervase de Tintagel for Tintagel Castle.

The castle has long been linked with the tales of King Arthur since 1136 when Geoffrey of Monmouth wrote in his "History of the Kings of Britain" circa 1133-35. Later stories related that Arthur was born and even lived at Tintagel. 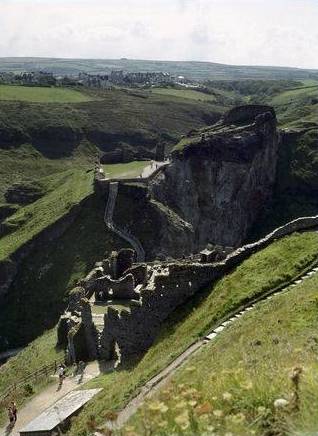 The name derives from Dintagel, meaning fortress of the narrow entrance. The site was possibly occupied in the Roman era, as an array of artefacts dating to this period have been found on the peninsula, but as yet no Roman era structure has been proved to have existed there. Although there are few historical certainties concerning the Dark Age Castle, legends swirl around it. It is reputed to be the home of the mysterious Uther Pendragon, father of Arthur and the legend of Tristram and Iseult has strong connections to the site. Legend states that Uther Pendragon fell in love with the beautiful Igraine, the wife of Gorlois of Cornwall and was determined to have her. Uther persuaded Merlin to use his magical powers to acquire him a place in Igraine's bed. While Gorlois was killed at St. Dimilioc during a siege on his camp, Merlin transformed Uther in his image. He is then said to have calmly entered Tintagel Castle, where he and seduced Ygerna. Arthur was conceived as a result.

Uther later learned of the death of Gorlois and returned to Tintagel to seize it and Ygerna. The tale of Arthur's conception has a parallel in the story of Mongan, a seventh-century Irish king of the Dal nAraide in County Antrim, where, so the legend relates, the sea god Mannanan mac Lir transforms himself into Fiachna, the husband of Mongan's mother Caintigern.

Local legend states a version that Merlin lived in a cave below the castle of Tintagel while King Arthur grew up. In one version of the legend, Arthur was found by Merlin washed ashore in a cave below the castle, now known as Merlin's Cave. The poet Tennyson immortalized Merlin's Cave in his 'Idylls of the King', describing the waves bringing the infant Arthur to the shore and Merlin carrying him to the safety of the castle above.

Archaeological evidence, including the remains of a fifth to sixth-century settlement and a large number of imported luxury goods found, suggest that this may have been a stronghold of the kings of Dumnonia - a kingdom which consisted of Cornwall, Devon and parts of Somerset.

The castle's medieval fortifications are divided into two sections, the upper and lower wards stand rather precariously on the edge of a crumbling precipice on the landward side, and the inner ward clings to a narrow ridge reaching to a small island. The Great Hall originally measured over 80 feet long by 36 feet wide, it was divided later into smaller buildings. A path descends to the landing at sea level. It was protected by an Iron Gate defended through arrow slits. There is still a walled area that was used as a garden in the medieval era.

The castle's chapel is dedicated to St. Juliette, the chapel's west end is the oldest part of the building, a porch added in the thirteenth century. Tintagel Castle was originally joined by a causeway to the mainland but erosion has destroyed much of the causeway and access is now by two steep stairways. 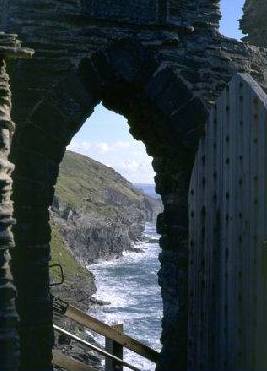 Later Earls of Cornwall made little use of the castle, the hall was roofless by the mid-fourteenth century although in 1483 the Chapel of St Juliette was still being used. By the late fifteenth century, the castle had already fallen into ruins.

Excavations in the 1930s confirmed Dark Age occupation of the site and uncovered monastic remains. Pottery found at the Tintagel site was dated to the fifth and sixth centuries - the time of Arthur. The 1998 excavations undertaken by archaeologists from Glasgow University led to the discovery of an inscription on a piece of slate unearthed on the Eastern terraces of Tintagel. The slate reads 'ARTOgNOV' a Latin form of the Celtic name Arthnou, derived from the Celtic word Arth, meaning bear. The stone apparently has two inscriptions. The upper strongly incized letters have been broken off and are no longer decipherable. The lower inscription, though fainter, clearly reads "Pater Coliavificit Artognov", which Professor Charles Thomas of Exeter University has carefully translated as "Artognou, father of a descendant of Coll, has had this built. The archaeological team has been quite reserved about the inscription, their preliminary conclusion was 'all this stone shows us in the name Artognou, is the use of this Celtic element'. The find demonstrates the continued use of Latin in the Cornish peninsula after the collapse of Roman Britain. 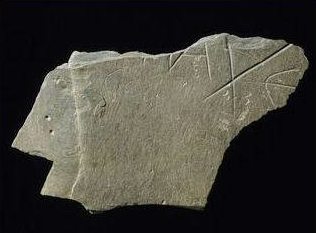 Two tunnels run underneath Tintagel. The shorter tunnel, known to have been made with metal tools, opens out in the meadow above the cliffs. The larger tunnel is known as Merlin's Cave.