When the Catholic King James II celebrated Mass in the chapel adjoining St. George's Chapel at Windsor Castle, it was wrecked by an angry mob. It remained unused until the time of George III, who rebuilt part of it in connection with his tomb house. The chapel was converted into the Albert Memorial Chapel between 1863-73 by George Gilbert Scott to commemorate the life of Victoria's much-mourned consort, Prince Albert. On completion, the chapel was renamed the Albert Memorial Chapel and opened to visitors for the first time on 1 December 18. 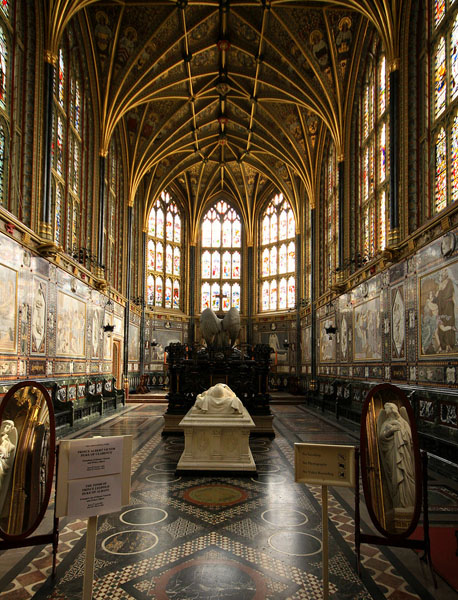 In front of the altar, with its elaborate reredos, is the Cenotaph of Prince Albert by Triqueti, with a white marble figure of the prince resting on a sarcophagus. In the middle of the nave is the monument of Albert Victor, Duke of Clarence, the elder son of Edward VII, and heir to the throne who died of pneumonia at Sandringham House in Norfolk on 14 January 1892. Near the west, the door is that of Prince Leopold, Duke of Albany, the youngest son of Queen Victoria. Leopold had haemophilia, he died on 28 March 1884 at the age of 30, from a cerebral haemorrhage, which was caused by a fall.

The east door of the Albert Memorial Chapel, which is covered in ornamental ironwork, is the original door from 1246. To the north of the Albert Chapel is the Dean's Cloisters, built by Edward II, the south wall of which is a fragment of the old chapel of Henry III.

The Hastings Chantry is the burial place of Lord Hastings who was hurriedly executed on a block of wood by order of Richard III in 1483.

An elaborately carved memorial to Princess Charlotte, the only child of King George IV, who died in childbirth in the evening of 5 November 1817, after delivering a stillborn son, lies in a side chapel toward the back of the nave.

The vault beneath the chapel, where Prince Philip, Duke of Edinburgh is currently buried, was constructed between 1810 and 1814. Philip passed away on April 9, 2021, at the age of 99, just two months before his 100th birthday. When the present Queen, Elizabeth II, dies, the Duke's body will be transferred to the King George VI memorial chapel to lie beside her.