The princess' maternal grandmother, Marie de Medici, tried to have the infant princess betrothed to the future William II of Orange. Charles I, however, considered the marriage beneath the rank of a princess of England and Scotland, but the king's financial and political situation eventually forced his hand and he finally sent Elizabeth's older sister, Mary, Princess Royal, to marry William instead.

On the outbreak of the Civil War in 1642, the close and unusually affectionate royal family were divided. The Queen and her eldest daughter Princess Mary left for the safety of Holland. Elizabeth along with her younger brother Henry, Duke of Gloucester, were refused permission to join their father at the Royal court in Oxford and from the age of six, Elizabeth became a prisoner of Parliament. Among the guardians appointed for the two children was Philip Herbert, 4th Earl of Pembroke. Later, in 1642, guardianship of the king's younger children was given to the Earl of Northumberland. The children's older brother, James, Duke of York, (the future King James II), visited them, and was said to have been advised to escape by Elizabeth

Elizabeth with her brothers Princes Henry and James 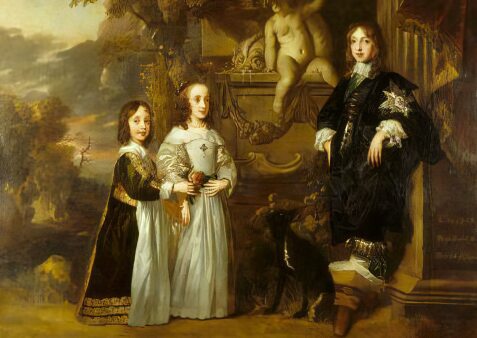 In 1643, then aged seven, Elizabeth broke her leg, and consequently was moved to Chelsea with her brother Henry. She was tutored by the female scholar Bathsua Makin, known as 'England's most learned lady' until 1644, by which time she could read and write in Hebrew, Greek, Italian, Latin and French. Finally, in 1647, Elizabeth, James and Henry were allowed to travel to Maidenhead to be reunited with their much-loved father the King and spent two days in his company.

The King was later removed to Hampton Court Palace but visited his children then under the care of the Northumberland at Syon House. These visits came to an abrupt end when the king fled to Carisbrooke Castle on the Isle of Wight. Believing himself to have found a temporary refuge, King Charles quickly discovered that he was once again a prisoner. The then ten-year-old Elizabeth is said to have helped James, Duke of York escape, dressed as a woman.

Elizabeth was known as "Temperance" by her family due to her sweet and kind nature. Her tempestuous upbringing had produced a young woman of unusual character. When she was eleven, the French ambassador described the princess as a "budding young beauty" who had "grace, dignity, intelligence and sensibility" that enabled her to judge the different people she met and understand different points of view. Her strength of character stood in firm contrast to her continued poor health.

When Parliament decided to remove Elizabeth's household in 1648, the twelve-year-old princess wrote a letter of appeal against the decision- "My Lords, I account myself very miserable that I must have my servants taken from me and strangers put to me. You promised me that you would have a care for me; and I hope you will show it in preventing so great a grief as this would be to me. I pray my lords consider of it, and give me cause to thank you, and to rest. Your loving friend, Elizabeth." The Lords were sympathetic to her plight and condemned the Commons for intervening with the Royal Household and the decision was accordingly overturned. However, the Commons demanded that the royal children be brought up strict Protestants; they were also forbidden to join the Court at Oxford and were held virtual prisoners at St. James's Palace.

King Charles I was captured for the last time and sentenced to death by Parliament in 1649, Elizabeth wrote a long letter to parliament requesting permission to join her sister Mary in Holland. However, this request was refused until after her father's execution had been carried out. On 29 January 1649, an emotional final meeting occurred between the thirteen-year-old Elizabeth and the eight years old Duke of Gloucester, and their father. Elizabeth wrote an account of the meeting that was found among her possessions after her death-

Elizabeth and Henry bid farewell to their father He told me he was glad I have come, and although he had no time to say much, yet somewhat he had to say to me which he had not to another, or leave in writing because he feared their cruelty was such as that they would not have permitted him to write to me." Elizabeth was sobbing so hard that her father asked her if she would be able to remember everything he told her. She promised never to forget and said she would record it in writing. She wrote two separate accounts of the meeting, both found among her effects after her death a year and a half later.

Her father told her not to "grieve and torment herself for him" and asked her to keep her faith in the Protestant religion. Charles, I told her to read certain books, among them Bishop Andrew's Sermons, Hooker's Ecclesiastical Polity and Bishop Laud's book against Fisher, to ground her against "popery"-

" He bid us tell my mother that his thoughts had never strayed from her and that his love would be the same to the last. Withal, he commanded me and my brother to be obedient to her; and bid me send his blessing to the rest of my brothers and sisters, with communications to all his friends. Then, taking my brother Gloucester on his knee, he said, 'Sweetheart, now they will cut off thy father's head.' And Gloucester looking very intently upon him, he said again, "Heed, my child, what I say: they will cut off my head and perhaps make thee a king. But mark what I say. Thou must not be a king as long as thy brothers Charles and James do live; for they will cut off your brothers' heads when they can catch them and cut off thy head too at the last, and therefore I charge you, do not be made a king by them.' At which my brother sighed deeply, and made answer: 'I will be torn in pieces first!' And these words, coming so unexpectedly from so young a child, rejoiced my father exceedingly. And his majesty spoke to him of the welfare of his soul, and to keep his religion, commanding him to fear God, and He would provide for him. Further, he commanded us all to forgive those people, but never to trust them; for they had been most false to him and those that gave them power, and he feared also to their own souls. And he desired me not to grieve for him, for he should die a martyr, and that he doubted not the Lord would settle his throne upon his son, and that we all should be happier than we could have expected to have been if he had lived; with many other things which at present I cannot remember."

Following the execution of Charles I, Elizabeth and Prince Henry became unwanted charges. Joceline, Lord Lisle, son of the Earl of Northumberland, preented a case to parliament for the removal of Elizabeth and her brother from the Northumberlands' care. Parliament, however, refused to allow them to go to Holland to join their sister Princesss Mary and instead placed them in the care of Sir Edward Harrington; at which Harrington's son successfully pleaded that they be looked after elsewhere.

The children were moved to Penshurst Place in Kent and placed in the care of Robert Sidney, 2nd Earl of Leicester and his wife Dorothy. Instructions were given that the children should not be indulged. Dorothy, Countess of Leicester ignored these instructions and treated Princess Elizabeth with great kindness, for which Elizabeth gave her a jewel from her collection. The valuable jewel later became the centre of conflict between the Countess and Parliamentary commissioners appointed to oversee the late king's estate.

In 1650, Elizabeth's eldest brother, now called Charles II by the Royalists, sailed for Scotland to ally himself with the Covenanters against their mutual enemy,Oliver Cromwell. He found it a humiliating experience. Their dour form of Presbyterianism was forced on him and the young Charles, with characteristic cynicism, found he had "to repent me that I was ever born," On 3 September 1650, the Covenanters were defeated at the Battle of Dunbar by a much smaller force led by Oliver Cromwell. Charles was nevertheless crowned King of Scotland at Scone in January 1651. 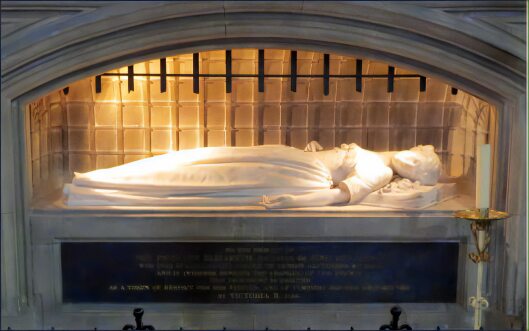 Elizabeth was moved to Carisbrooke Castle on the Isle of Wight as a hostage, where her father had been imprisoned. She was placed in the care of Anthony Mildmay, this move was probably the cause of her death. The Princess had complained that her health would not permit her to travel, but it nevertheless proceeded anyway; she caught a cold, which quickly developed into pneumonia, In her last days, she was described as a sad child by those who had seen her, she died on 8 September 1650. Elizabeth was found dead with her head on a Bible which her father had given her.

Three days after Elizabeth's death, permission for the princess to join her sister Mary in the Netherlands arrived in the Isle of Wight. She was buried at St. Thomas's Church, Newport, on the island. An examination of her remains conducted in Victorian times revealed that she had suffered from rickets, which had resulted in shoulder and back deformities, knock knees and pigeon toes which would have made it difficult for her to walk. The adolescent Elizabeth had a long face, reddish-brown hair and a protruding jaw, possibly an inheritance from her mother's Habsburg ancestry.

Following her death, her grave was largely unmarked until the nineteenth century, except for her carved initials. Queen Victoria, who made her favourite home at Osborne House on the Isle of Wight, commanded that a suitable monument be erected to her memory. In 1856, a white marble sculpture by Queen Victoria's favourite sculptor, Carlo Marochetti was commissioned to mark her grave it depicted Elizabeth as a beautiful young woman, lying with her cheek on a Bible open to words from the Gospel of Matthew: "Come unto Me, all ye that labor and are heavy laden, and I will give you rest."

Above the sculpture is a grating, indicating that she was a prisoner, but the bars are broken to show that the prisoner has now escaped to "a greater rest." The plaque marking the sculpture reads: "To the memory of Princess Elizabeth, daughter of King Charles I, who died at Carisbrooke Castle on 8 September 1650, and is interred beneath the chancel of this church, this monument is erected as a token of respect for her virtues and sympathy for her misfortunes, by Victoria R., 1856.