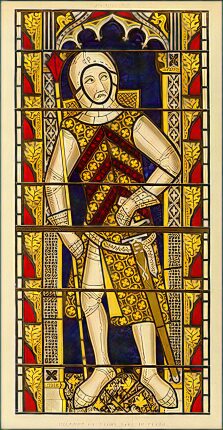 Both Richard and his father supported King Stephen in the civil war known as the Anarchy between King Stephen and the Empress Matilda. Richard's father died in around 1148, when he was roughly 18 years old, and he inherited the title 'count of Strigoil' Earl of Pembroke. This title was probably not recognized at the coronation of the first Plantagenet king King Henry II in 1154. As Gilbert's son, he succeeded to his father's estates in 1148, but was deprived of the title by King Henry II of England in 1154 for supporting Stephen against Henry's mother, the Empress Matilda.

Richard's cognomen 'Strongbow' has become the name by which he is best known, but it is unlikely that he was called that by his contemporaries. Cognomens of other Cambro-Norman and Norman lords were exclusively Norman-French as the nobility spoke French and, with few exceptions, official documents were written in Latin at the time. The confusion seems to have arisen when Richard's name was being translated into Latin. In the Domesday Exchequer annals between 1300 and 1304, over 120 years after his death, he is recorded as "Ricardus Conocimiento Stranghose Comes Strugulliae (Richard known as Striguil earl of Striguil)." This chronicler erroneously has attributed Stranghose (foreign leggings) as a cognomen, where it is much more likely a variant spelling or mistranscription of Striguil, which is called Strangboge, Stranboue or Stranbohe in other transcriptions. It is in the fourteenth century that we have Richard's name finally rendered as Strongbow "Earl Richard son of Gilbert Strongbow (earl of Shropshire).

Richard was known by his contemporaries Count Striguil, for his marcher lordship of Striguil where he had a fortress at what is now Chepstow, on the River Wye in Monmouthshire. He was described by the chronicler Gerald of Wales as "His complexion was somewhat ruddy and his skin freckled; he had grey eyes, feminine features, a weak voice, and short neck. For the rest, he was tall, and a man of great generosity and courteous manner.

Richard de Clare met Diarmait Mac Murchada, the deposed King of Leinster in 1168. Diarmait Mac Murchada (Dermot MacMurrough) was deprived of the Kingdom of Leinster in the previous year, by Ruaidrí Ua Conchobair, the High King of Ireland. This resulted from Mac Murchada's abduction of Derbforgaill, the wife of Tiernan O'Rourke, the King of Breifne, in 1152. To recover his kingdom, Mac Murchada solicited aid from the King of England, Henry II. The deposed monarch sailed for Bristol from near Bannow on 1 August 1166. He met Henry in Aquitaine in the Autumn of 1166. Henry could not help but provided a letter of comfort for willing supporters of Mac Murchada's cause in his kingdom.

However, after his return to Wales, Mac Murchada failed to rally any forces to his standard. He eventually met Richard de Clare and other barons of the Welsh Marches. Mac Murchada arranged with Richard for his assistance with an army the following spring, in return for which he could marry Mac Murchada's eldest daughter Aoife and succeed to Leinster after his death. As Henry's approval or license to Mac Murchada was a general one, the count of Striguil thought it prudent to obtain Henry's consent to travel to Ireland: he waited two years to obtain this. The license he acquired was to aid Mac Murchada in the recovery of his kingdom of Leinster.

The marriage of Richard de Clare and Aoife MacMurchada 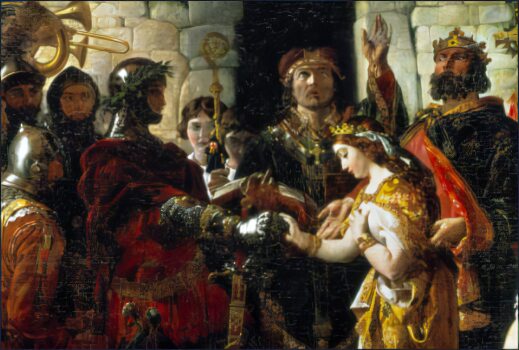 Murchada and Richard de Clare raised a large army, which included Welsh archers and arranged for Raymond FitzGerald (also known as Raymond le Gros) to lead it. The force took the towns of Wexford, Waterford, and Dublin in quick succession between 1169 and 1170. Richard de Clare arrived later, in August of 1170.

On around 26 August 1171 in Waterford, Richard de Clare married MacMurrough's daughter, Aoife MacMurrough (anglicised as "Eva"). They had two children-

In May 1171, Diarmait Mac Murchada died and his son, Donal MacMurrough-Kavanagh (Irish: Domhnall Caemanach mac Murchada) claimed the kingdom of Leinster in accordance with his rights under the Brehon Laws. Richard de Clare also claimed the kingship in the right of his wife.

Strongbow sent his uncle, Hervey de Montmorency, as an emissary to Henry II. This was necessary to appease the King who was growing restive at the count's increasing power. Upon his return, de Montmorency conveyed the King's terms - the return of Richard de Clare's lands in France, England, and Wales as well as leaving him in possession of his Irish lands. In return, Richard de Clare surrendered Dublin, Waterford, and other fortresses to the English king. Henry's intervention was successful and both the Gaelic and Norman lords in the south and east of Ireland accepted his rule. Richard de Clare also agreed to assist Henry II in his coming war in France.

King Henry II had promised William Marshal that he would be given Isabel de Clare as his bride, and his son Richard I upheld the promise one month after his ascension to the throne. The earldom was given to her husband as her consort. The marriage was to produce 10 children. William and Isabel's 's five sons inherited the office of Marshall after him, which then passed through a daughter to the Bigod, Mowbray and Howard families to the present Duke of Norfolk. Marshall was the son of John the Marshal, by Sibylle, the sister of Patrick, Earl of Salisbury. Richard de Clare died in June 1176 of an infection in his leg or foot. He was buried in Holy Trinity Church in Dublin with his uncle-in-law, Lawrence, Archbishop of Dublin, presiding.

King Henry II took all of Strongbow's lands and castles for himself and placed a royal official in charge of them. Aoife was given her dower rights and possibly held Striguil as part of those dower rights until the Welsh rebellion of 1184/85. The last record of her is confirming a charter in Ireland in 1188/89 as "comtissa de Hibernia". His tomb-effigy was destroyed when the roof of the Cathedral collapsed in 1562. The present effigy dates from around the fifteenth century.