Edmund Beaufort was the third surviving son of John Beaufort, 1st Earl of Somerset and Margaret Holland. John Beaufort was himself the illegitimate son of John of Gaunt, Duke of Lancaster, (the third surviving son of King Edward III) and Katherine Swynford. His maternal grandparents were Thomas Holland, 2nd Earl of Kent (the son of Joan, Fair Maid of Kent) and Alice FitzAlan. Alice was a daughter of Richard FitzAlan, 10th Earl of Arundel and Eleanor of Lancaster. 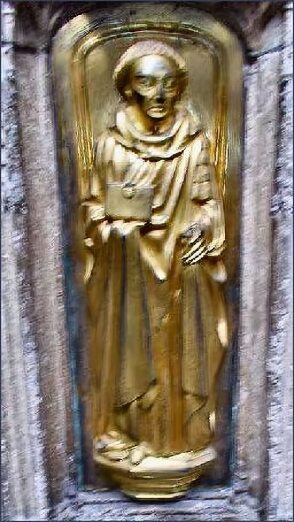 Edmund served as a commander in the English army in France in 1431, re-capturing Harfleur, and lifting the Burgundian Siege of Calais in 1436. He married Lady Eleanor Beauchamp, widow of Thomas de Ros, 9th Baron de Ros before 1436 , Eleanor was the daughter of Richard de Beauchamp, 13th Earl of Warwick and his first wife, Elizabeth de Berkeley, the marraiage produced ten children:- 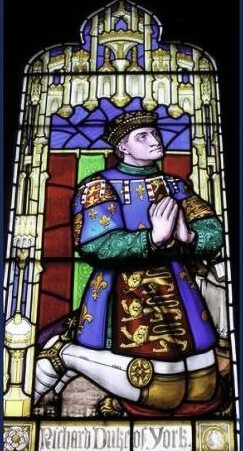 Edmund was involved in an intense personal rivalry with his cousin Richard, Duke of York, the richest magnate in the land. Edmund's cousin, King Henry VI created him Earl of Dorset in 1442 and Marquess of Dorset the following year. From 1444 to 1449 he served as Lieutenant of France.

In March 1448 he was created Duke of Somerset, the title had previously been held by his brother John, whose death was rumoured to be suicide as he was unable to brook the shame and disgrace of banishment from court and replacement by Richard of York as regent of France. Somerset was appointed to replace York as commander in France in 1448 but his subsequent military failures were criticized by York's supporters. By 1453 nearly all the English possessions of Henry V in France were lost and the Battle of Castillon ended the Hundred Years War with France.

In 1453, at the age of thirty-two, King Henry VI began to exhibit signs of serious mental illness. By means of a "sudden fright", he entered into a trance-like state reacting to and recognising no one. Catatonic schizophrenia or depressive stupor have been suggested as a likely diagnosis of the king's condition. York was appointed protector, to the annoyance of the Queen, Margaret of Anjou, who strongly felt that she and her party should govern England.

Rumour at the time claimed that Edward of Lancaster, the son of Queen Margaret of Anjou, the wife of Henry VI, had been fathered by Edmund Beaufort, these were based on the long time which elapsed from Margaret's marriage and the time she became pregnant, and Henry VI's insanity around the time of conception. Henry VI himself did nothing to such rumours when on being introduced to the new Prince of Wales, enquired about the child's godfathers and adding to existing doubts about the child's paternity, he declared that Edward must have been fathered by the Holy Ghost. However, the rumour of his adultery with the queen may have been part of a campaign during the king's insanity to destroy his reputation and reduce his influence.

The personal rivalry between Richard of York and Margaret's favourite, Edmund Beaufort intensified. York despised Somerset due to the favouritism given to him by the King, He strongly felt that Somerset was largely responsible for the English losses in France and that he should be removed from office and tried for treason.

Henry recovered his senses by Christmas of 1454, and York's former position as the Captain of Calais was given to the Duke of Somerset. York, dismissed from office, was discontented. His position, he realised, was now a precarious one, exposed as he was to the suspicion and venom of the Queen, who once again controlled the government. A great council was called at Leicester, which was packed by Somerset's supporters. York and his allies, Richard Neville, Earl of Warwick and his father, Richard Neville, Earl of Salisbury, suspecting unimpartial treatment, travelled south with an army. Attempts at discussion between the factions evoked further anger on both sides.

At the ensueing battle of St. Albans, which marked the beginning of the Wars of the Roses, Somerset was killed in a last wild charge from the house where he had been sheltering. He was buried at St. Albans Abbey. His son, Henry, who succeeded him as Duke of Somerset, was never to forgive Warwick and York for his father's death.

The Ancestry of Edmund Beaufort, Duke of Somerset