Richard Neville, Earl of Salisbury, was born in 1400 at Raby Castle in County Durham, he was the son of Ralph Neville, Earl of Westmorland and his second wife Joan Beaufort, the illegitimate daughter of John of Gaunt, Duke of Lancaster, the third surviving son of King Edward III and Katherine Swynford. 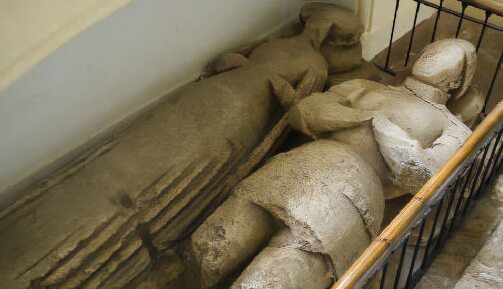 After Henry Percy, popularly known as 'Harry Hotspur' was killed at the Battle of Shrewsbury in rebellion against Henry IV, Ralph Neville was ordered to capture the elder Percy. In reward he was appointed as Warden of the Marches, a position traditionally held by the Percies. Although they were later restored to the East March, the West March, remained in Neville's hands and was later controlled by Salisbury.

His elder half-brother, the Earl of Westmorland's eldest son, John Neville, inexplicably agreed to much of the Neville estates being transferred to his step mother, Joan Beaufort and on her death in 1440, these too, were inherited by Salisbury. John Nevilles's son, Ralph later disputed this inheritance and a settlement was agreed upon in 1443, by which Salisbury retained Middleham, Sheriff Hutton and Penrith, while Raby Castle was returned to the senior branch of the Neville clan.

The powerful Percy family held extensive estates throughout the north of England, but his position as Warden of the West March enabled Salisbury to exert a great deal of authority in the north-west, despite holding only Kendal and Penrith, which the Percies resented. In addition, the senior Neville line, who descended from Ralph Neville's first marriage to Margaret Stafford and who was related by marriage to the Percys, resented the settlement of their inheritance dispute with Richard Neville.

In 1448, during the renewal of the war with Scotland, Northumberland caused offence by marching his forces through Salisbury's West March. Northumberland was defeated at the Battle of Sark, and Salisbury was excluded from the subsequent peace negotiations, further inflaming the already poor relations between the two influential families.

Northumberland's son, Lord Egremont, further stirred up trouble in Yorkshire, particularly in York, and at Neville's castle of Sheriff Hutton . In August 1453, Egremont assembled a force with the intent of waylaying Salisbury as he traveled to Sheriff Hutton after attending the wedding of his son Thomas Neville. Although Salisbury arrived unharmed at the castle, the incident marked the beginning of a Neville/Percy feud.

In 1453, at the age of thirty-two, King Henry VI began to exhibit signs of serious mental illness. By means of a "sudden fright", he entered into a trance-like state reacting to and recognising no one. Catatonic schizophrenia or depressive stupor have been suggested as a likely diagnosis of the king's condition. Henry's cousin, Richard, Duke of York, the richest magnate in the land and considered by some to be the rightful heir to the throne, was married to Salisbury's sister Cecily Neville. York was appointed protector, to the annoyance of the Queen, Margaret of Anjou, who strongly felt that she and her party should govern England.

Henry recovered his senses by Christmas of 1454, and York's former position as the Captain of Calais was given to the Edmund Beaufort, Duke of Somerset. York, dismissed from office, was discontented. His position, he realised, was now a precarious one, exposed as he was to the suspicion and venom of the Queen, who once again controlled the government. A great council was called at Leicester, which was packed by Somerset's supporters. York and his allies, Salisbury, and his son Richard Neville, Earl of Warwick suspecting unimpartial treatment, travelled south with an army and at the First Battle of St Albans defeated Margaret's forces and gained custody of the king.

Salisbury, marching from his base at Middleham Castle in Yorkshire, to join Edward Earl of March, gained victory over a Lancastrian army sent to intercept him under James Tuchet, 5th Baron Audley at the Battle of Blore Heath on 23 September 1459. Following the setback of the Battle of Ludford Bridge on 12 October 1459, the Yorkist commanders went into self-imposed exile, Salisbury, his son Richard, Earl of Warwick, and York's son Edward, Earl of March reached Calais on 2 November 1459, where Warwick found his uncle Lord Fauconberg. Meanwhile, the Duke of York and his second son Edmund, Earl of Rutland, took refuge in Dublin.

On 26 June 1460, Salisbury, Warwick and Edward landed at Sandwich. The Queen, Margaret of Anjou, fiercely defensive of the rights of her son, Edward of Lancaster, the Prince of Wales, remained utterly determined to crush the Yorkist claim to the throne. She gathered an army to advance her son's cause and York, Salisbury and Warwick were forced into flight before her.

In response, the Duke of York marched his forces from his base at Ludlow but was intercepted by a Lancastrian army lead by Lord Audley. Attempts at negotiation between Warwick and the Lancastrians proved fruitless as Henry refused to admit Warwick to his presence. The ensuing battle outside the walls of Northampton proved a significant Yorkist victory, the Duke of Buckingham, the Earl of Shrewsbury and Lords Egremont and Beaumont were all killed whilst attempting to protect the king from the Yorkists closing on his tent. Henry was again captured and Margaret and her son were forced to flee.

After a skirmish with Lancastrian forces at Worksop on December 16, 1460, the Duke of York and Salisbury arrived at York's castle of Sandal near Wakefield in Yorkshire on 21 December, where they improved the castle's defences against a Lancastrian attack and intended to spend the Christmas season there. The Lancastrian camp at Pontefract lay only 9 miles (14 km) to the east. On the morning of 28 December a Lancastrian force marched out from Pontefract to confront him, York was aware that Lancastrian armies were in the area and sent for aid to his son Edward, but before any reinforcements could arrive, he inexplicably sortied from the castle on 30 December.

The Battle of Wakefield lasted less than an hour, the Duke of York was slain in the melee, it was said that he went down fighting with his back to a clump of willow trees. His seventeen-year-old son Edmund, Earl of Rutland, who had fought by his father's side, fled to escape over Wakefield Bridge, but was overtaken and killed, probably by Clifford in revenge for his father's death at St Alban's. Salisbury's fourth son Sir Thomas Neville, and his son in law William, Lord Harington, were also killed in the battle.

The Earl of Salisbury himself managed to escape the battlefield but was captured during the night by a servant of Sir Andrew Trollope, and taken to the Lancastrian camp at Pontefract Castle, where he was beheaded.

His alabaster effigy may be seen in Burghfield Church in Berkshire. Salisbury was buried first at Pontefract, but his surviving sons arranged the transfer of his body to the family mausoleum at Bisham Priory. It was brought to Burghfield after the Dissolution of the Monasteries under King Henry VIII.