Isabella of Valois the second wife of Richard II was born in Paris on 9 November 1389 and was the daughter of King Charles VI of France and his wife Isabeau of Bavaria.

Isabella was born at a time of political tension between England and its traditional rival France, which was exacerbated by the mental instability of her father, Charles VI, who is believed to have suffered from a form of schizophrenia (later inherited by his English grandson Henry VI).

Isabella of Valois and Richard II 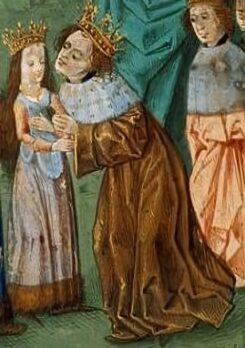 Negotiations between England and France were slow but both countries eventually agreed on a twenty-eight year truce in March 1396. The English ambassadors requested to see Isabella, in order to report on her appearance and conduct to their king, which was allowed, although the French, concerned by Isabella's youth pointed out:-

That they muste be content howe so ever they founde her, for they sayde she was but a yonge chylde of eyght yere of age, wherefore they sayd, there coulde nat be in her no great wysdome nor prudence; howbeit, she was indoctryned well ynough, and that the lords founde well whan they sawe her. The erle Marshall, beynge on his knees, sayde to her: Fayre lady, by the grace of God ye shall be our lady and quene of Englande. Than aunswered the yonge lady well advisedly, without counsayle of any other persone: Syr, quod she, and it please God and my lorde my father that I shall be quene of Englande, I shall be glad therof, for it is shewed me that I shall be than a great lady'.

Richard travelled to France, to meet his prospective bride and her father at Calais, after dinner, Isabella was led into the room accompanied by a great number of ladies and was ceremonially handed over to her new husband. On 31 October 1396, the six-year old Isabella was married to King Richard II of England at Calais, the new queen was provided with a huge dowry by the French.

Richard was a widower, his previous wife, Anne of Bohemia, to whom he had been married since his teenage years, had died in an outbreak of plague two years previously. Richard was said to be kind and affectionate to his child bride and visited her regularly. When challenged on the wisdom of marrying a bride so far from being old enough for childbearing, Richard contended that she would become older with every day that passed.

The capture of Richard II 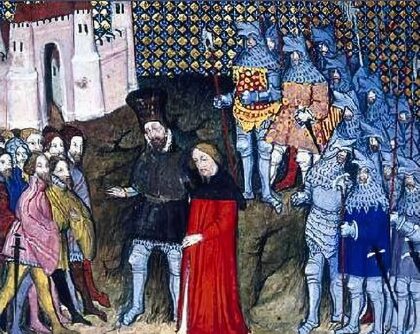 Isabella was moved to Porchester Castle while Richard conducted a military campaign in Ireland to put down a rebellion there. Soon after he left for Ireland, England was invaded by his cousin, Henry of Bolingbroke, the exiled son of John of Gaunt, Duke of Lancaster. The regent, Richard's uncle, Edmund, Duke of York, had the Queen conveyed Wallingford Castle for her safety. Richard's throne was usurped by Henry who was crowned as King Henry IV. Richard, returning from Ireland, was captured in Wales on 20 August 1399 and imprisoned, he was later murdered at Pontefract Castle.

The young Queen Isabella, who was reportedly 'tourned and broken' was required by the new king to move out of Wallingford Castle and to reside in the Havering-atte-Bower, she was later moved again to Sunning near Reading. When her father the King of France received news of Richard's death he demanded that Isabella be returned to France. King Henry then made Isabella aware of his plan to marry her to his son and heir, Henry, Prince of Wales, the future Henry V, by which she finally realised that Richard was dead.

Loyal to Richard's memory, the ten-year-old Isabella absolutely refused to do so and instead she and her household went into mourning for her husband, ignoring the king's demands. 'estranged her selfe from all occasions of pleasure or comforte, and was accompanied with a heavy traine composed to sorrow both in behaviour and attire'. Despite her father's wish that she be returned to France, the French ambassadors had great difficulty in gaining access to her. Eventually Henry allowed her to return to France with the jewels and plate she had brought with her to England...

On 29 June 1406, at the age of fifteen, Isabella was married for a second time to her cousin Charles, Duke of Orléans. She died at the age of nineteen, a few hours after giving birth to her only child, a daughter, Joan, who married John II of Alençon in 1424.

Isabella was interred at the abbey of St.Laumer in Blois, her body was later transferred to the church of the Celestines in Paris.

Isabella's younger sister Catherine of Valois, was later to become Queen of England as the wife of Henry V. Following the death of Henry V, Catherine's son by Owen Tudor was to become the ancestor of England's Tudor dynasty.

The Ancestry of Isabella of Valois