Matilda of Flanders was born circa 1031, the daughter of Baldwin V, Count of Flanders and Adele of France, who was the daughter of Robert II of France and Constance of Arles. She was also a descendant of King Alfred the Great and the old Saxon House of Wessex, through Alfred's daughter Aelfthryth who married Baldwin II of Flanders.

Her mother, Adele of France, had previously been married for a short time to William's uncle, Richard III, Duke of Normandy. Adele was an exceptionally religious woman, later referred to as "Adele the Holy", she had a great interest in Baldwin V's church reform politics and was behind her husband's founding of several collegiate churches, she passed this reverence of Christianity to her daughter, Matilda, who received an excellent education, overseen by her mother. 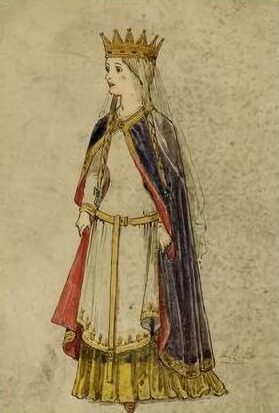 Described by contemporaries as having delicate features and a graceful figure, Matilda spent her early years in Lille in Northern France. Rumours at the time stated that Matilda had fallen in love with the English ambassador to Flanders, a Saxon named Brihtric, who declined her advances. Many years later while she was acting as Regent for William I in England, she confiscated Brihtric's lands and had him thrown into prison in revenge for this insult, where he is said to have died.

Tradition states that when Duke William of Normandy sent representatives to her father's court to request Matilda's hand in marriage, she retorted by proudly informing the representative that she was far too high-born to consider marrying a bastard. (William was the illegitimate son of 'Robert the Devil', Duke of Normandy and Arlette, daughter of Fulbert, a tanner of Falaise).

Furious on receiving this response, William rode to Bruges, where he confronted Matilda on her way to church, he pulled her off her horse and threw her down in the street in front of her attendants and rode off. An alternative version of the legend states that he rode to her father's court in Lille, marched defiantly into her room and threw her to the ground in her room and hit her. Whereupon it is said Matilda refused to marry anyone but William. 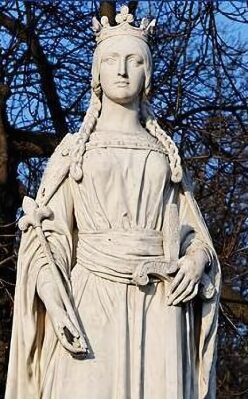 The couple were married circa 1051-2 at Notre Dame d’Eu. The marriage was condemned as incestuous by Pope Leo IX in 1049, and the couple were excommunicated. But in 1059 William was reconciled to the papacy, William and Matilda agreed to found two churches as penance for defiance of a papal ban on their marriage on the grounds of consanguinity. They were an ill-assorted pair, he strongly built and five feet ten inches tall and she (as it emerged when her skeleton was exhumed) extremely short. In 1819 and 1959, Matilda's skeleton was examined in France, and her bones were measured to determine her height. The 1819 estimate was under five feet, while the 1959 estimate was 5' (152 cm) tall.

It proved, however, to be a highly successful union and produced a large family of ten children. Two sons Robert (b.1051-1054, died 10 February 1134) and Richard (c.1054, died c. 1075) were born within three years of the marriage. These were followed by the couple's first two daughters, Cecilia and Adeliza (d. before 1113), and a third son, the future William II (born between 1056 and 1060, died 2 August 1100), Matilda (born around 1061) and Constance (died 1090), named in honour of Matilda's grandmother, the late Queen of France, she later married Alan IV Fergent, Duke of Brittany. They were followed by a sixth daughter Adela (died 1137) named for Matilda's mother, Adele of France, she was to become the mother of King Stephen. A fourth son, the future Henry I was born between May 1068 and May 1069, probably at Selby in Yorkshire. He was named Henry after his mother's maternal uncle, King Henry I of France.

All of Matilda's daughters were educated by the nuns at Holy Trinity Abbey. Cecilia took the veil and became Abbess of Holy Trinity, while Agatha, was married to Alfonso VI, King of Galicia-y-León, however, she died before she could join her husband in Spain. Shortly after Agatha's death, the couple's second son, Richard, was killed in a hunting accident in the New Forest, when he was gored to death by a stag. In a twist of fate, his younger brother, King William II Rufus, was himself killed in the New Forest thirty years later.

When William launched his fateful invasion of England in 1066, Matilda commissioned a magnificent flagship, The Mora, for her husband to cross the Channel, every detail of the ship had been planned with meticulous care. Matilda was left as regent in Normandy for her fourteen-year-old son Robert Curthose. William presented her with some of the crown jewels of England when they were reunited at Fécamp. Matilda was later crowned Queen of England on 11 May 1068 at Westminster Abbey.

Matilda spent most of her time in Normandy, looking after affairs there and raising her children. She often exerted a moderating influence on her husband. The Anglo-Norman Chronicler Orderic Vitalis relates:- 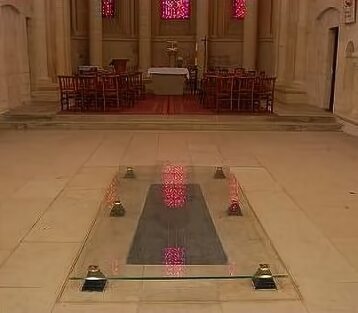 "She was even more distinguished for the purity of her mind and manners than for her illustrious lineage. She united beauty with gentle breeding and all the graces of Christian holiness."

The couple's eldest son, Robert was Matilda's favourite child but grew to be a source of dissension between his parents. Robert rebelled against his father but proved no match for him and William successfully suppressed the rebellion. Although he pardoned Robert, William refused to completely forgive his son. Relations were not helped when King William discovered that Matilda was secretly sending her son large sums of money.

At a battle in January 1079, Robert unhorsed King William in combat and wounded him, ceasing his attack only when he recognized his father's voice. Humiliated, King William cursed his son then raised the siege and returned to Rouen. At Easter 1080, reconciliation between father and son was engineered by Matilda. The family were reunited in Breteuil, in northern France, for celebrations to mark the betrothal of William and Matilda's 14-year-old daughter, Adela, to Stephen, Count of Blois. Matilda then encouraged William to make peace with his estranged half-brother, Odo, Bishop of Bayeux.

When Matilda fell seriously ill, William rushed to Normandy to be at her bedside. He wrote to Robert at Gerberol Castle, asking him to immediately come to Rouen. Matilda died at Caen, in November 1083 in her early fifties, after a lingering illness, her husband was at her bedside for her final confession. In her will she left large amounts of money to the poor and her royal sceptre and crown to Holy Trinity Abbey. She was buried in the choir of Holy Trinity, l'Abbaye aux Dames, her own foundation, in Caen, Normandy.

Following her death, William, much affected by her loss, was said to have become more short-tempered, gloomy and severe.

The Ancestry of Matilda of Flanders