Through her mother Margaret, the daughter of Edward Atheling, otherwise known as 'Edward the Exile', Mary was a descendant of the Saxon House of Wessex. Her maternal aunt, Matilda of Scotland, the wife of King Henry I, stood as godmother at her baptism and she was named Matilda in her honour. Matilda was educated, like her mother and aunt before her, at the convents of Wilton and Romsey. 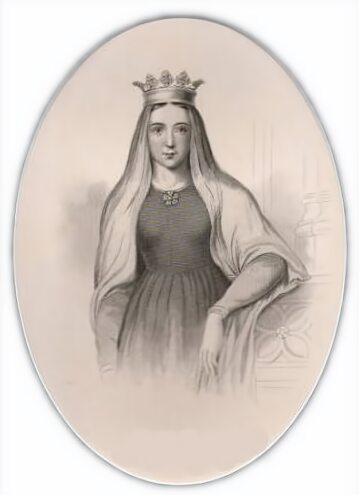 In 1125, Matilda married Stephen of Blois, Count of Mortain, the son of Stephen Count of Blois by William the Conqueror's youngest daughter Adela. Stephen had been sent to his Uncle Henry I's court in England as a young boy after his father died in the Holy Land. In the same year as her marriage to Stephen, Matilda's father Eustace retired to a monastery, and Matilda became Countess of Boulogne which she ruled jointly with her husband.

The couple were granted a London residence by Stephen's uncle, King Henry I. Stephen and Matilda had five children:-

(2) Baldwin of Boulogne (died in infancy)

(3) William of Blois, Count of Mortain and Boulogne and Earl of Surrey, married Isabel de Warenne, no issue

(5) Mary I, Countess of Boulogne, married Matthew of Alsace, had issue

On the death of Henry I in 1135, despite swearing an oath of loyalty to Henry's daughter Empress Matilda, Stephen usurped the English throne. Matilda of Boulogne, reportedly pregnant at that time, joined her husband in England after the child's birth in Boulogne and was accordingly crowned Queen of England at Easter on 22 March 1136. Her dispossessed cousin the proud and haughty Empress Matilda would not accept this situation. The uncle of both Empress Matilda and Matilda of Boulogne, David I of Scotland, invaded England in support of the Empress in 1138, and was defeated by Stephen.

Queen Matilda was a supporter of the Knights Templar. She founded Cressing Temple in 1137 and Temple Cowley in 1139. Like her aunt and predecessor, Matilda of Scotland, she had a close relationship with the Holy Trinity Priory at Aldgate. She took the prior as her confessor and two of her children were buried there. 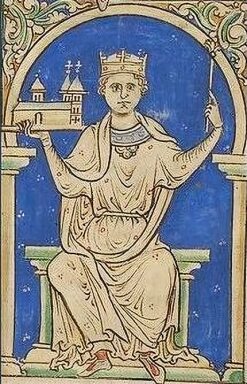 In the civil war which followed Stephen's usurpation of the throne, which was known as the Anarchy, Matilda proved to be her husband's strongest supporter. When England was invaded by her cousin Matilda the Empress' forces in 1138, she called troops from Boulogne and its ally Flanders and besieged Dover Castle with success.

She then went north to Durham, where she made a treaty with her uncle King David I of Scotland in 1139. Shortly after Matilda had concluded the Scottish treaty, she went to the court of France on a diplomatic mission to negotiate a marriage between her eldest son, Eustace and Constance, the sister of King Louis VI of France. The couple were married in 1140.

Matilda was in the south of England when she received news that her husband the king had been captured by the Empress Matilda's forces at the Battle of Lincoln in February 1141. She sought refuge in the Tower of London. The Empress Matilda had gone on to Oxford and then to Winchester where Matilda sent messengers, begging the Empress to release Stephen. The Empress rejected her cousin's pleas.

Matilda rallied the king's supporters and raised an army with the help of William of Ypres. While the Empress Matilda who styled herself 'Lady of the English' waited in London to prepare for her coronation, Matilda and Stephen's brother Henry of Blois, Bishop of Winchester had her expulsed from the city by an angry mob of Londoners who became exasperated by her arrogance.

Empress Matilda went on to besiege Henry of Blois at Winchester. Matilda of Boulogne then commanded her army to attack the besiegers. The Empress's half-brother and most staunch supporter, Robert Earl of Gloucester, was captured at the Rout of Winchester. The two Matildas agreed to an exchange of prisoners. Stephen was a broken man, on his release, now in the depths of depression. The war dragged on with no real victory on either side until an uneasy peace was reached in 1147 when Robert of Gloucester, Maud's chief supporter died and she returned to Anjou. Stephen and Matilda founded a monastery at Faversham to give thanks for the peace.

Queen Matilda died of a fever at Hedingham Castle, Essex, when visiting her close friend Euphemia, Countess of Oxford. She was buried at Faversham Abbey, which had been founded by herself and her husband. Her eldest son Eustace died fourteen months after his mother, aged about twenty-three. After Eustace's death, Stephen met with the Empress Matilda's son Henry Plantagenet, Count of Anjou, Duke of Normandy and concluded the Treaty of Wallingford, whereby Henry was named as his heir, bypassing Stephen and Matilda's younger son, William, but Stephen was to remain as king until his death.

Stephen and Matilda's younger son, William of Boulogne, Earl of Surrey, through his marriage to Isabella de Warenne, was allowed to keep his earldom by the new King Henry II. Their youngest daughter, Mary, was Abbess of Romsey for five years until she was abducted in 1160 by Matthew of Alsace, who forced her to marry him. They divorced in 1170 and Mary returned to the convent while Matthew continued to rule Boulogne. The marriage produced two daughters, Ida and Matilda, Ida, (1160/1161 - 21 April 1216), who succeeded her father as Countess of Boulogne and married firstly Gerard of Guelders and secondly Berthold IV of Zahringen; Ida married for a third time to Count Renaud de Dammartin, by whom she had one daughter, Matilda II of Boulogne, who succeeded her as countess.