Home to medieval Kings and Queens of England, Leeds Castle is situated on the River Len, 5 miles (8 km) southeast of Maidstone in Kent.

Ledian or Leed, a minister of Ethelbert IV, the Anglo-Saxon King of Kent, built a wooden structure on two islands in the middle of the River Len in 857, the castle was rebuilt in stone in 1119 by the Norman Robert de Crevecoeur. Most of the buildings remain as they were laid out by King Edward I, with later additions by Henry VIII. 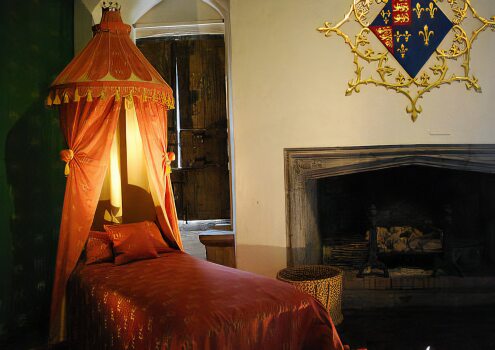 In 1139 the castle saw action during the turbulent conflict between the cousins King Stephen and Queen Maud, in 1139 Stephen besieged and captured it from Maud's supporters. Stephen, had, following the of death of King Henry I, usurped England's throne from Henry's daughter Matilda.

The de Crèvecoeur family managed to regain the castle, which remained in their possession until the 1260s when it passed to William de Leyburn. De Leyburn amassed large debts and was forced to sell Leeds Castle, it was purchased by King Edward I's queen, Eleanor of Castille (1241 - 1290), in 1278. 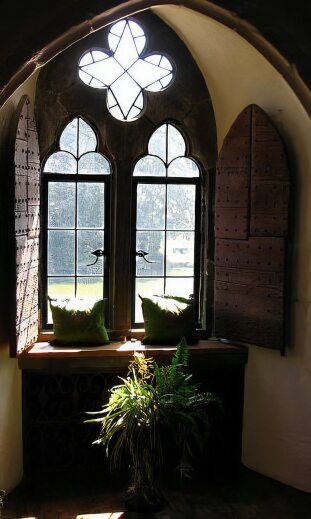 King Edward I improved the castle's defences, and it was probably he who created the lake which surrounds it. A barbican was constructed spanning three islands and a drawbridge connected the main island to a smaller island holding the keep, which was referred to as the Gloriette, influenced by his Spanish born Queen, Eleanor of Castille, the term derives from the Spanish word for a pavilion at the intersection of pathways in a garden. On the ground floor stood the main hall, which now serves as a Banqueting Hall, and an apartment, which is now the chapel, a fine two-light window survives in this room.

Eleanor's health began to deteriorate in 1287 and she died in 1290, leaving Edward distraught, there's had been a true love match, he later wrote- 'in life I loved her dearly, nor can I cease to love her in death.' To improve relations with France, in 1299, Edward married Princess Margaret, (c. 1279 - 14 February 1318) the daughter of King Philip III of France. The couple spent their honeymoon at Leeds Castle and he granted the castle to his new wife. From then on Leeds Castle formed part of the 'dower' of several queens of England, which was retained after the king’s death, it became known as the "ladies castle", which it is still called today.

When Queen Margaret of France died in February 1318, Leeds reverted to the crown. Her stepson Edward II (1284 - 1327) made Bartholomew de Badlesmere governor of the castle. Lord Steward of the royal household, Baldesmere had fought in the English army both in France and Scotland during the later years of the reign of Edward I. By 1321 Edward's diastrous policies had alienated many his nobles, Badlesmere, who detested his minions the Despencers, amongst them.

Baldesmere's wife, Margaret de Clare, refused Edward's Queen, Isabella of France (1295 - 22 August 1358) access to the castle who required overnight accommodation on the return trip from a pilgrimage to Canterbury. Margaret de Clare, who strongly disliked the Queen, announced that she must seek accommodation elsewhere. The Queen sought to force an entry, whereupon Lady Badlesmere instructed her archers to fire on the Queen and her party, six of whom were killed. 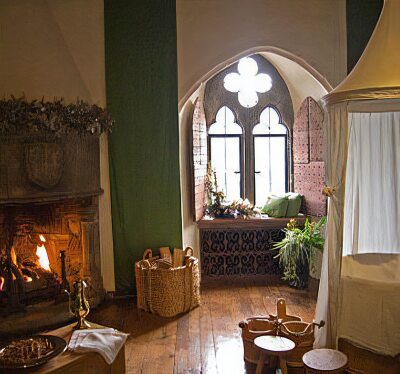 To avenge the insult delivered to the Queen, Edward besieged and took the castle in response, the second siege in its long history. The siege lasted for a week before the garrison capitulated on 31 October 1321. When the castle fell, the seneschal, Walter Colepepper and 12 of the garrison were hanged from the battlements, Margaret de Clare, Baroness Baldesmere was imprisoned in Dover Castle and later in the Tower of London, although she was released a year later, her husband was not so lucky. A few months later, participating in the Earl of Lancaster's rebellion, he fought at the Battle of Boroughbridge on 16 March 1322 and was captured after the battle and less than a month later on 14 April 1322 was attainted and hanged, drawn and quartered at Blean near Canterbury. His severed head was then attached to a pole on Burgate, one of the main Roman gates into Canterbury's city walls.

Edward II was deposed and murdered in 1327 by his estranged wife and her lover, Roger Mortimer, Earl of March. Leeds passed into the possession of Isabella of France, who held it until her death in 1358, after which reverted to her son, King Edward III. Edward refurbished the royal apartments in the Gloriette and built new outer gates, with two portcullises and a drawbridge.

The castle passed to Edward III's grandson, Richard II who granted it to his much loved queen, Anne of Bohemia, in 1382. Anne spent the Christmas before her wedding to Richard at Leeds, and the pair became regular visitors. After Anne's death in 1394, Richard returned to Leeds Castle several times, he used it for state business as well as for leisure. In 1395, the French historian Jean Froissart described it as the 'beautiful Palace in Kent called Leeds Castle'.

Richard's cousin and successor, Henry IV, gave the castle to his second wife, Joan of Navarre, in 1403. She granted Leeds to the Archbishop of Canterbury, Thomas Arundel, in 1412. Her stepson Henry V charged Joan with plotting his death by witchcraft. Her revenues were confiscated and she was imprisoned, firstly at Leeds, and later at Pevensey Castle. 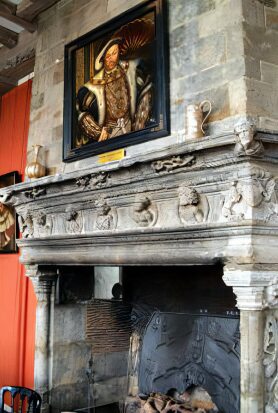 Towards the end of his reign, however, Henry regretted his treatment of Joan, she returned to Leeds in March 1422 and in July she was freed and her property restored to her. Henry V died in France of dysentery in August 1422, he bequeathed Leeds Castle to his young widow Catherine de Valois, (1401-1437) the daughter of Charles VI of France and the mother of Henry's son, the infant King Henry VI. Catherine stayed at Leeds Castle on many occasions when it became the scene of the scandalous affair between Catherine and her Welsh Clerk of the Wardrobe, Owen Tudor. She held the castle until her death in 1437.

Two of the rooms open to the public have been restored to their fifteenth century appearance, as they would have looked during the reign of Henry V and Queen Catherine. Silk damask in shades of coral, gold and green with the initials "H" and "C" entwined with a lovers' knot decorate the bed, walls and furniture. Although the daybed and chair were used, the bed in the Queen's bedroom was symbolic and never slept in.

The queen's bathroom, a small room, adjoins her bedroom. The bathtub is a simple wooden tub draped and Covered by a canopy of fine linen.

The queen's gallery is furnished with oak furniture dating from a variety of periods. A pair of Brussels tapestries that depict biblical scenes decorate the walls along with a sixteenth-century triptych of the legend of St. Ursula.

King Henry VIII, perhaps the most famous of Leeds Castle's royal owners, transformed the castle in 1519 for his first wife, Catherine of Aragon (1485- 1536). The maiden's tower was constructed in about 1544 to house the Queen's Maids of Honour. Among them was Anne Boleyn of nearby Hever Castle. Anne was to become Henry's second wife and the mother of Elizabeth I. A jewel casket that once belonged to her is displayed in the Heraldry room. Henry VIII visited Leeds Castle often and stayed there on his way to his famous meeting with Francis I of France at the Field of the Cloth of Gold in 1520. A painting commemorating his meeting with his rival still hangs at the castle. Queen Elizabeth, I was imprisoned in the castle for a while before her coronation.

The last owner of Leeds Castle was an American, Lady Baillie who purchased it in 1926 and restored it. Following her death in 1975 it was left to the nation under the trusteeship of the charitable Leeds Castle Foundation.