Sophia Dorothea of Celle was born on 15 September 1666, the daughter of George William, Duke of Brunswick-Luneberg, who ruled the Celle portion of the duchy of Brunswick and his mistress, Eleonore desire d'Olbreuse, an exiled French Protestant aristocrat and the daughter of Alexander II d'Esmiers, Marquess of Olbreuse. In 1674 Sophia Dorothea was legitimised and Éléonore became the Duchess of Wilhelmsburg. Two years later her parents were married. 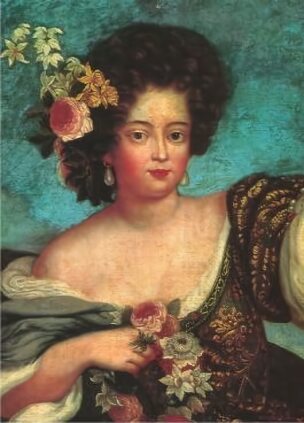 George William was the brother of Ernest Augustus, Elector of Hanover. Discussions took place regarding a marriage between the pretty, lively and charming Sophia and the heir to the throne of Denmark, but the Queen of Denmark was talked out of the match by Sophia, Electress of Hanover, the wife of Ernest Augustus and Sophia's aunt. Another engagement to the Duke of Wolfenbüttel was broken off after the Electress Sophia convinced her brother-in-law of the advantages of having Sophia Dorothea marry her eldest son George Louis of Hanover.

When informed of the change in arrangements and her new future husband, Sophia Dorothea, who had favoured marriage with the handsome Duke of Wolfenbüttel, rebelled strongly against it, shouting "I will not marry the pig snout!", she hurled a miniature of George Louis presented to her by Duchess Sophia against the wall. Forced by her unrelenting father to accept the marriage, she fainted in her mother's arms on her first meeting with her future mother-in-law. She fainted again when presented to her future husband.

The couple formally resided at the Leine Palace in Hanover, George Louis' family, especially his mother the Electress Sophia hated and despised Sophia Dorothea. Their eagerness to bring about the marriage was motivated by purely financial reasons, the Electress Sophia wrote to her niece Elizabeth Charlotte;-"One hundred thousand thalers a year is a goodly sum to pocket, without speaking of a pretty wife, who will find a match in my son George Louis, the most pigheaded, stubborn boy who ever lived, who has round his brains such a thick crust that I defy any man or woman ever to discover what is in them. He does not care much for the match itself, but one hundred thousand thalers a year have tempted him as they would have tempted anybody else." His mother's feelings of contempt were shared by George himself, Sophia Dorothea was frequently scolded for the lack of etiquette she displayed at the Hanoverian court, and the couple had loud and bitter arguments. The marriage nevertheless produced two children, a son, George Augustus (the future George II) born in 1683 and a daughter named Sophia Dorothea in 1686. 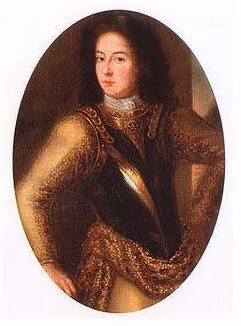 George Louis took a mistress Melusina von Schulenburg and pointedly neglected his young wife. His parents asked that he be more circumspect with his mistress, but he responded by going out of his way to treat his wife brutally. The unhappy and neglected Sophia Dorothea took an interest in the tall and handsome Swedish count Philip Christoph von Königsmarck. The two had previously met in Celle when he was sixteen. They had indulged in flirtation, and traced their names on the palace windows with the words "Forget me not". George Louis' younger brothers liked the dashing Count Phillip and brought him to Sophia Dorothea's salon in the evening to cheer her. He remained in Hanover for two years but left to take part in a military expedition to the Peloponnese in 1690, which turned out to be a disaster.

On his return to Hanover, Count Phillip and Sophia Dorothea exchanged passionate and lurid love letters. In 1692, these letters were brought to the attention of her father-in-law, Elector Ernest Augustus, who sent Königsmarck to fight with the Hanoverian army against Louis XIV. Other soldiers were given leave to visit Hanover, but he was denied it. Königsmarck deserted his post and rode for six days to visit Hanover. The day after arriving, he confessed his breach of duty to Field Marshal Heinrich and begged for leave to remain in Hanover. Heinrich agreed though he added that the affair ought to be ended or Königsmarck will leave the country. Ernest August reacted by exiling Königsmarck who acquired a new post with the Elector of Saxony.

Sophia Dorothea and her children, the future George II and Sophia, Queen of Prussia 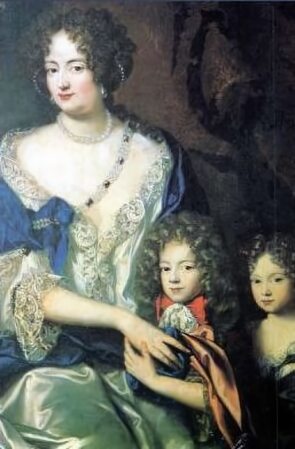 George Louis railed at his wife over her affair, and she reacted by pointing out his adulterous activities. A violent argument ensued, George threw himself on Sophia Dorothea and started tearing out her hair and strangling her, leaving purple bruise marks on her neck. Her attendants managed to pull him off her.

The unhappy Sophia Dorothea and Königsmarck planned to elope, however, Countess Platen, the mistress of Ernest Augustus, discovered the plan and reported it to her lover. Ernest Augustus had his guards arrest Königsmarck, the count fought back, wounding one of his assailants in the process. Königsmarck was killed, his body disappeared entirely, believed to have been buried under the bloodstained floorboards of the corridor in the Leine Palace, his corpse covered in quicklime to hasten decomposition. Meanwhile, a hysterical Sophia Dorothea was detained in her rooms, under house arrest. Several of the guards and Countess Platen confessed on their deathbeds to being involved in his death.

Sophia Dorothea was divorced by her husband, she stated during the divorce proceedings "We still adhere to our oft-repeated resolution never to cohabit matrimonially with our husband, and that we desire nothing so much as that separation of marriage requested by our husband may take place," . She was found guilty of "malicious desertion" and imprisoned at the Castle of Ahlden, she was twenty-eight years old at the time. Sophia Dorothea was given the new title duchess, or princess, of Ahlden and separated from her children who were raised by their paternal grandmother. Her mother was the only visitor permitted to see her and correspondence with her children was forbidden. Her mother attempted to improve Sophia Dorothea's condition but her efforts, which included negotiations with both Louis XIV and William III, but sadly did not succeed. From April to September of 1700 George Louis allowed Sophia Dorothea to live at Celle in the face of a French invasion of the Brunswick duchies. Once the threat subsided George William, who coldly refused to see his daughter, sent her back to imprisonment at Ahlden.

Sophia Dorothea remained in captivity until her death from liver failure more than 30 years later on 13 November 1726, on her deathbed she wrote a letter to George Louis, denouncing him for his incessant cruelty to her and cursing him from beyond the grave. She was buried beside her parents at the Stadtkirche St. Marien in her childhood home of Celle. George Louis refused to allow mourning in Hanover or England and was infuriated when he heard that his daughter Sophia's Prussian court had decided to wear black in her honour. Sophia Dorothea had inherited her mother's property in 1722 upon Eleanore's death and left it in her will to her children, but George Louis destroyed the will and appropriated her property for himself.

George Louis inherited the Principality of Lüneburg after the death of his father-in-law and uncle, George William in 1705, and also later inherited the Kingdoms of Great Britain and Ireland and became George I through his mother, the Electress Sophia, a granddaughter of the Stuart King James I. Sophia Dorothea was remembered fondly by her children, neither of whom saw their mother again, which left the young George Augustus extremely resentful of his father. This resentment began the painful spiral of the breakdown of the relationship with his father.