Perkin Warbeck was the second of the Yorkist Pretenders to lay claim to the throne during the reign of King Henry VII, the founder of the Tudor dynasty. A youth named Lambert Simnel had previously raised a rebellion claiming to be Edward, Earl of Warwick, the son of George, Duke of Clarence and later posing as Richard, Duke of York, the younger of the two 'Princes in the Tower'. These rebellions underlined the vulnerability of Henry's position in the early part of his reign. 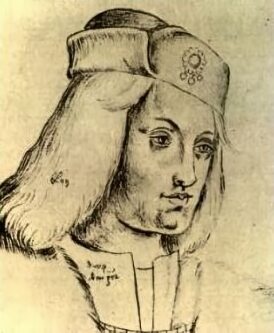 According to his later confession, Perkin Warbeck was a native of the town of Tournai, who was born around 1474. He was the son of Jehan de Werbecque, a burgess, and Katherine de Faro. These details are corroborated by municipal archives of Tournai which mention many of the people whom Warbeck claimed he was related to.

When he was about ten years of age, his mother took Warbeck to Antwerp to learn Dutch. He was employed by an Englishman John Strewe, and then travelled to Portugal with Lady Brampton, the wife of Edward Brampton, a Portuguese Jew and exiled partisan of the house of York, who was the godson of Edward IV. He later gained employment from Pierre Jean Meno, a Breton silk merchant and travelled with Meno to Cork in Ireland in 1491 when he was around seventeen, where he learnt to speak English. Ireland had a strong adherence to the House of York for many years. Warbeck went on to claim in his confession that on seeing him dressed in silk clothes, some of the citizens of Cork mistook the good looking young man for one of the Plantagenet Princes, believing that Warbeck was the Earl of Warwick, which Warbeck denied. They then stated that he was Richard, Duke of York, whom it was rumoured had been murdered in the Tower of London along with his brother Edward V in 1483. Warbeck was purported to have been rescued before his "brother" Edward V had been murdered and smuggled abroad to safety. 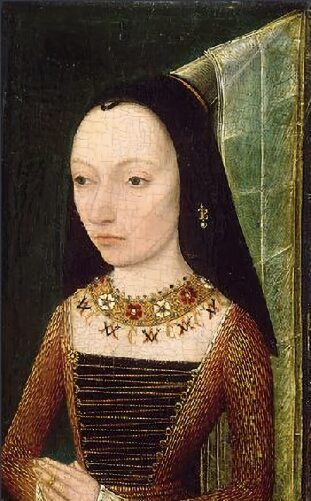 Warbeck found but little support in Ireland and returned to mainland Europe where he was received by King Charles VIII of France, however in 1492 he was expelled from France under the terms of the Treaty of Etaples. Warbeck was summoned to the court of Margaret of York, Dowager Duchess of Burgundy, sister of Edward IV and widow of Charles the Bold, who publicly recognized him as her nephew Richard Duke of York. Whether Margaret genuinely believed that Warbeck was her nephew Richard, or whether she gave her support to be a thorn in the side of her brother Richard III's supplanter is unknown, but she is said to have schooled him on the Yorkist court and made him very convincing. She may have been the source of the 'memories' he claimed of the court of Edward IV which many found convincing. Warbeck was said to resemble Edward IV in appearance, which has led to speculation that he may have been an illegitimate son of Edward.

Seeing the recognition as a cause for anxiety, Henry VII complained to Philip of Habsburg, Duke of Burgundy, about the presence of the pretender at the Burgundian court but no avail. Henry responded by imposing a trade embargo on Burgundy, cutting off the duchy's important trade-links with England. Warbeck was also received at various other European courts and came to be referred to in international diplomacy as the 'Duke of York'. In 1493, Warbeck gained a powerful supporter in the person of Duke Philip's father, the Holy Roman Emperor Maximilian I, at Maximilllian's invitation, he attended the funeral of the Emperor Frederick III and was recognised as King Richard IV of England.

However, luck was on the side of the Tudor king, Henry VII, Maximilian had difficulties in enforcing his authority across his vast empire which reduced his ability to influence English politics. Charles VIII of France also lost interest in Warbeck and diverted his attention and finances towards northern Italy, which he invaded in 1494. Henry had established an efficient spy network across Europe and was rapidly informed that Warbeck's support was waning. He was also advised by his spies who were willing to support the Pretender in England.

Sir William Stanley, whose timely intervention at Bosworth had ensured Henry's victory in the battle, had been overheard to state that if Warbeck was the son of Edward IV, he would never oppose him. A Parliament held in 1495 passed several acts of attainder including one against Stanley. When it was pointed out to the king that it was Sir William Stanley's timely intervention that had saved his life at Bosworth, he replied that he had also delayed long enough for him to have lost it. Stanley was beheaded for treason on 10 February and his lands forfeit to the crown.

With funds provided by Margaret of York, Warbeck arrived on English shores in July 1485, he attempted to land at Deal in Kent. He hoped to gather support in the surrounding area before marching on London. His small force was routed and many of his troops slain before Warbeck had even disembarked. Forced to retreat, he sailed for Ireland, where he obtained the support of Maurice FitzGerald, 9th Earl of Desmond at Munster, and laid siege to Waterford, but was unsuccessful, he then sailed for Scotland.

Seeing an opportunity to cause problems for his English neighbour, James IV King of Scots gave refuge to the pretender and provided him with a pension of £1200 a year. James also gave him the hand of his kinswoman, Lady Catherine Gordon, in marriage. Catherine was the daughter of George Gordon, 2nd Earl of Huntly.

Warbeck attempted a second invasion of England on 21 September 1496 and marching from Edinburgh, crossed the border penetrating around 4 miles into England. Little was achieved and his second attempt at raising a rebellion turned out to be equally disastrous, as support for his cause was not forthcoming south of the border. In the hope of improving relations with the Scots, Henry offered James the hand of his daughter Margaret Tudor in marriage, James, seeing the advantages of such a match, willingly accepted and in July 1497 Warbeck returned to Ireland accompanied by his wife and their children, he again attempted to besiege Waterford, but after 11 days was repelled and chased by English ships.

Hoping to profit from the ill-feeling of the Cornish toward Henry VII, who had recently risen in revolt, Warbeck landed at Whitesand Bay, to the west of Plymouth. He proclaimed that he could prevent high taxes raised to fight the Scots, which the Cornish objected to, he was greeted enthusiastically. Warbeck was declared King Richard IV on Bodmin Moor and with a large army of Cornishmen entered Exeter and proceeded to Taunton. Henry VII dispatched an army under Giles Daubeney, 1st Baron Daubeney, to oppose them. When Warbeck heard news that the King's scouts had reached Glastonbury he lost his nerve and deserted his army. He was taken prisoner at Beaulieu Abbey in Hampshire, where he had hoped to obtain sanctuary.

Henry VII himself arrived in Taunton on 4 October 1497, where he received the surrender of the remaining Cornish army. The ringleaders were executed and others fined. Warbeck was sent to the Tower of London, being paraded through the London streets on horseback where he was met with derision by the Londoners. His wife Catherine Gordon was kindly treated and placed in the household of Henry VII's consort Elizabeth of York.

While imprisoned in the Tower he entered into a conspiracy with Edward, Earl of Warwick, the pair attempted to escape in 1499 but were captured. On 23 November 1499 Warbeck was drawn on a hurdle from the Tower to Tyburn, where after reading out a confession, he was hanged. Warwick also paid for the escape attempt with his life, at the age of 24, he was beheaded for treason on Tower Hill.