Anne of Cleves was the daughter of John III, the Simple, Duke of Cleves and Marie of Juelich and Berg and was born at Dusseldorf, Germany on 22 September 1515.

Anne had two sisters, Amelia, and Sybilla, (the latter was married to the Duke of Saxony, head of the Schmalkaldic League, a defensive alliance formed by Protestant German princes. Her brother William succeeded to the position of ruler of the German duchy after her father's demise. Anne could claim descent from Edward I and his second wife, Margaret of France. 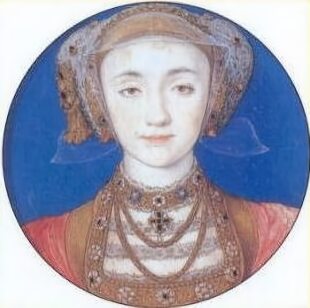 Both of Anne's paternal great-grandparents, John I 'the Simple' Duke of Cleves and Elizabeth of Nevers, were great-grandchildren of Margaret of Dampierre, suo jure Countess of Flanders. Margaret was the great-granddaughter of Margaret, Duchess of Brabant; daughter of Thomas of Brotherton, Earl of Norfolk (from whom Anne Boleyn and her first cousin Catherine Howard also descended), Thomas was the son of Edward I by his second marriage to Margaret of France.

Following the death of his third wife Jane Seymour from puerperal fever, whom he mourned sincerely, Henry VIII after a suitable period of mourning, was prepared to remarry. His minister Thomas Cromwell arranged a fourth marriage for the king, designed to counter the growing threat of the Catholic powers, it allied him to the German Protestant princes. The Duke of Cleves was a Catholic but was allied through marriage with Saxony and the league of Lutheran princes.

Henry had received glowing reports of Anne of Cleves and had received a flattering miniature which he had commissioned from Hans Holbein, with which he was much taken. When Anne arrived in England, Henry could not contain his haste to meet her and rushed excitedly down to Rochester to present her with New Years gifts "to nourish love". Alarmed at what he saw, he returned most reluctant to go through with the marriage and enraged at the unfortunate Cromwell.

Cromwell persuaded his obstinate, wilful and deeply shocked sovereign that there was now "no remedy" but to go through with it. "If it were not to satisfy my realm and my people" complained the miserable Henry on his marriage morning "I would not do that which I must do this day for no earthly thing." His complaint that he had "not been well served" by Cromwell had an ominous and threatening ring. Deeply lamenting his fate, Henry married Anne on the twelfth night, 6 January 1540, at the Royal Palace of Placentia at Greenwich, the service was performed by Thomas Cramner, Archbishop of Canterbury. 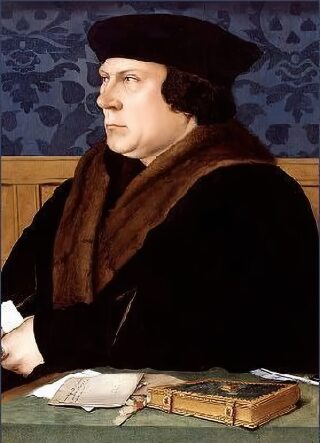 The wedding night, by all accounts, went equally disastrously, the king could not bring himself to consummate the marriage and when Cromwell enquired the following morning, 'How liked you the Queen?', Henry replied in surly bad humour, 'I liked her before not well, but now I like her much worse.'

In a bid for power, the Duke of Norfolk, head of the Catholic faction at court, flaunted his nubile and attractive niece, Catherine Howard, before the King. Henry was smitten by the exquisite Catherine and had his marriage to "that great Flanders Mare" Anne annulled on the grounds that she had a pre-contract with the Duke of Lorraine.

Anne had been Queen of England for just four months when she was commanded to leave the court on 24 June and was informed of her husband's decision to have their marriage annulled. Anne complied with all her formidable spouse's requests, she wisely agreed to be Henry's "good sister".

The marriage was annulled on 9 July 1540, on the grounds of non-consummation. Anne signed herself in her letter of submission as the 'daughter of Cleves', not 'Queen of England' and was granted a generous settlement was given an allowance of £4,000 per year by her relieved ex-spouse, the settlement included Hever Castle, ironically once the home of Henry's second wife Anne Boleyn.

Anne was to remain in England for the rest of her life and never remarried, she enjoyed an independent lifestyle which was denied to most women at the time. She was reported to have spent large sums of money on gowns; and visited with the king's children, whom she had grown fond of and occasionally, the king himself. The king's younger daughter, the Lady Elizabeth continued to visit her former stepmother at Richmond. Anne made her last public appearance at Mary Tudor's coronation in 1553, where she rode with Princess Elizabeth.

Anne of Cleves died of a declining illness on 16 July 1557, in the reign of Mary I. In her will she left jewels to both her former stepdaughters, Elizabeth and Mary and is buried at Westminster Abbey. The final resting place of Henry VIII's fourth queen is marked by a black and white marble monument.