Louisa Maria Stuart was born on 28 June, 1692, at Saint-Germain-en-Laye, her parents were the exiled King James II and VII and his beautiful Italian wife Mary Beatrice of Modena. Her father's supporters, known as Jacobites referred to her as The Princess Royal. 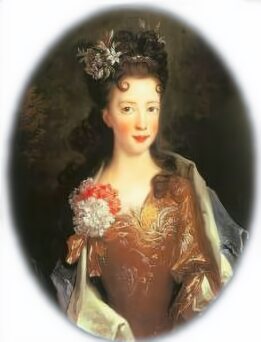 Following the "Glorious Revolution", the Catholic King James had fled into exile with his family in 1688, his cousin, the French King Louis XIV had given James the Chateau of St Germain-en-Laye, near Paris, for the use of him and his court in exile. His eldest daughter, the Protestant Queen Mary II and her husband William III now reigned in England in his stead.

Controversy had surrounded the birth of Louise's elder brother, James Francis Edward in June 1668, when accusations were made that another baby, smuggled in the birth chamber in a warming pan had been substituted for the Queen's still born child, James therefore sent letters inviting his daughter, Queen Mary II and a large number of Protestant ladies to attend the birth. The historian Macaulay later commented :-

' Had some of those witnesses been invited to Saint James's on the morning of the tenth of June 1688, the House of Stuart might, perhaps, now be reigning in our island. But it is easier to keep a crown than to regain one. It might be true that a calumnious fable had done much to bring about the Revolution. But it by no means followed that the most complete refutation of that fable would bring about a Restoration. Not a single lady crossed the sea in obedience to James's call. His Queen was safely delivered of a daughter; but this event produced no perceptible effect on the state of public feeling in England.' 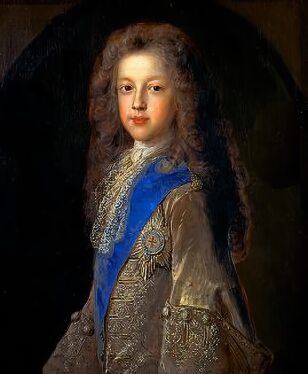 The newborn infant was christened Louisa Maria, Louisa, a Christian name not previously used in the House of Stuart was given in honour of King Louis XIV, in response to the aid he had rendered to her father, Maria was one of her mother's names. Louis XIV acted as her godfather while his sister-in-law, Elizabeth Charlotte, Princess Palatine, Duchess of Orléans served as godmother to the new Princess. Theresa was added later as a confirmation name.

Of the many siblings and half-siblings born of her father's two marriages, only her brother James Francis Edward and her half-sisters, Queen Mary II and Queen Anne, had survived infancy. Mary died while Louisa Maria was still a very young child, but two years old, Louisa was on friendly terms with her half-sister Anne, although they never met. James II was later to declare that Louisa Maria had been sent by God as a consolation for her parents at the time of their distress, and in later years she was often referred to as 'La Consolatrice'. Louisa was brought up in France with her brother James Francis Edward, later known as the 'Old Pretender'. Her tutor was an English Catholic priest, Father Constable, who taught Louisa Latin, history, and religion. She also had a governess, the Countess of Middleton, wife of the Jacobite peer Charles, 2nd Earl of Middleton.

King James health steadily deteriorated and by the summer of 1701 he was seriously ill, he left Saint Germain seeking medical treatment, accompanied by his wife. but the couple returned home in June for the birthdays of their children. Two months later, at the age of sixty-eight, James suffered a stroke while hearing mass at the Château de Saint-Germain-en-Laye in March 1701, which left him partially paralysed and. He was still able to converse when his children were ushered in his room to see him for the last time, to Louisa Maria he is reported to have said

'Adieu, my dear child. Serve your creator in the days of your youth. Consider virtue as the greatest ornament of your sex. Follow close the great pattern of it, your mother, who has been, no less than myself, over-clouded with calumny. But time, the mother of truth, will, I hope, at last make her virtues shine as bright as the sun.' James II died of a seizure on 16 September 1701. 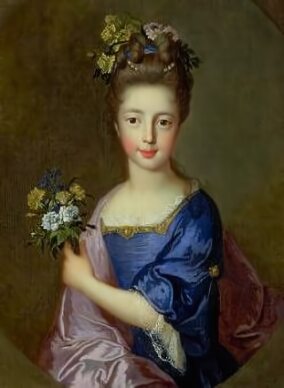 Soon after the death of James's death, Louis XIV proclaimed his son James III and VIII of England, Scotland and Ireland, and he was also formally recognised as king by Spain, the Papal States and Modena, a claim that was largely ignored by England. However, James was still a minor and their mother, Mary, acted as his regent until he reached his majority. He and his sister Louisa Maria were transferred to Passy, into the care of Antoine Nompar de Caumont and his wife, with Lady Middleton continuing as Louisa Maria's governess there. Louisa felt keen that Jacobites in exile had made huge sacrifices for her family, and she paid for the daughters of many of them to be educated. In this, she made no distinction between Roman Catholics and Protestants, supporting the daughters of both

In 1705, when she was aged thirteen, Louisa Maria was a guest of honour at a ball at the Château de Marly, ranking only after Louis XIV himself, her mother Queen Mary, and her brother James Francis Edward, who was considered by Louis to be another King. Louisa Maria was reported to have enjoyed dancing and the opera and became very popular at the French court. Two tentative matches were considered for her, with Louis XIV's grandson Charles, Duke of Berry (1686-1714), and with King Charles XII of Sweden (1682-1718). Neither took place, the first apparently due to Louisa Maria's equivocal position, and the second because the young King of Sweden was a Protestant.

In April 1712, both James Francis Edward and Louisa contracted smallpox. While James eventually made a recovery, Louisa Maria, aged 19, died on 18 April and was buried with her father at the Church of the English Benedictines in Paris. William Legge, 1st Earl of Dartmouth, wrote of the Princess's death;-

The queen [Anne] showed me a letter written in the king of France's own hand, upon the death of her sister; in which there was the highest character that ever was given to any princess of her age. Mr Richard Hill came straight from the earl of Godolphin's... to me with the news and said it was the worst that ever came to England. I asked him why he thought so. He said it had been happy if it had been her brother; for then the queen might have sent for her and married her to Prince George, who could have no pretensions during her own life; which would have pleased every honest man in the kingdom, and made an end of all disputes for the future.