The remarkable life of Nell Gwynne, most famous of the many mistresses of 'the Merry Monarch', Charles II, a classic rags to riches story, began on 2 February 1650. Nell was was the daughter of Thomas and Ellen Gwynn, her place of birth is disputed, with some sources stating Pipe Well Lane in Hereford, which was renamed Gwynne Street in the nineteenth century, while others state she was born in London. 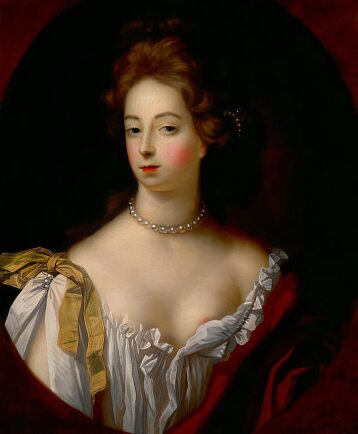 Her father was of Welsh descent, a soldier ruined by the civil war, he is said to have died in a debtors prison in Oxford, Nell probably had no memory of him. Her mother 'Madam Gwynn', was born within the parish of St Martin-in-the-Fields, London, and is thought to have lived most of her life in the city, she was by most accounts an alcoholic who ran a bawdy house or brothel, where the young Nell is said to have 'served strong waters to gentlemen.'

Nell grew up in squalid Coal Yard Alley, a poor slum off Drury Lane. Her childhood occupations have been variously described as bawdyhouse servant, a street hawker of herring, oysters, or turnips, and cinder-girl. Her mother was drowned in a pond at Chelsea, probably while drunk, in July 1679. 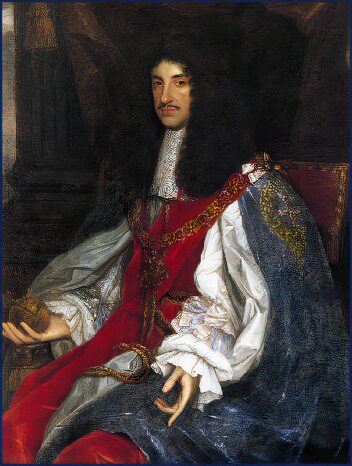 In around 1662, Nell had an affair with a man named Duncan, which lasted around two years, he provided her with rooms at a tavern in Maypole Alley and may have secured her a job as an orange seller at a nearby theatre, where she worked with her older sister Rose.

She later became the mistress of the actor, Charles Hart, through whose influence she became an actress at around the age of fifteen and was said to be particularly good at comic roles. The diarist, Samuel Pepys, reported himself delighted by the performance of "pretty, witty Nell", watching her as Florimel in Dryden's Secret Love, or the Maiden Queen he wrote- "so great a performance of a comical part was never, I believe, in the world before.....so done by Nell her merry part as cannot be better done in nature". Dryden later wrote plays specifically to exploit her talents as a comic actress. Nell was extremely pretty with long reddish-brown hair and a good figure, reckless but generous and unpretentious, she was known to be illiterate and could only sign her name with her awkwardly scrawled initials "E.G.".

She remained a member of the Drury Lane acting company until 1669, playing continuously except for a short period in Epsom in the Summer of 1667, when she lived as the mistress of Charles Sackville, styled Lord Buckhurst and later 6th Earl of Dorset. Her affair with Charles II who she jokingly termed her 'Charles III' is reported to have begun in April 1668 when she was seventeen. Nell was attending a performance of George Etherege's play 'She Wou'd if She Cou'd' at Lincoln's Inn Fields theatre. The King was seated in the next box and by all accounts was more interested in watching Nell rather than Etherege's play. He later invited her to supper, along with his brother James, Duke of York. After supper, the king discovered that he had no money on him to pay, nor it seemed did his brother and Nell had to pay the bill. "Od's fish!" she is said to have exclaimed, in imitation of the King's often used expression, "but this is the poorest company I ever was in."

The notoriously temperamental Barbara Palmer (nee Villiers) Lady Castlemaine, had been Charles' mistress for many years, but their relationship was beginning to sour by the time he met Nell Gwynn. She bore six children and although it is assumed that Charles was the father of at least five of them, this is not certain. Charles is known to have denied paternity of her second son who was born in 1663, but Barbara, renowned for her furious temper, stamped her foot shouting "God damn me, but you shall own it!" and generally creating a scene until the king relented. 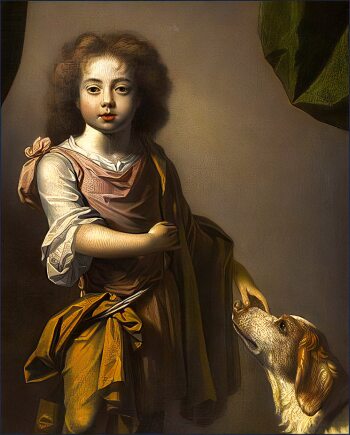 A few months later, the Frenchwoman Louise de Kérouaille came to England, ostensibly to serve as a maid of honour to Charles' wife, Catherine of Branganza, but in reality as Charles' mistress. Louise and Nell would prove rivals for many years. Complete opposites, Louise was very proud woman of her noble Breton birth, Nell a true child of the London streets, scathingly nicknamed her "Squintabella" and the "Weeping Willow" for her tendencies to weep. The rivalry between Nell, Lady Castlemaine, Louise de Keroualle and Moll Davies made the King's life difficult at times. He had 13 children in all by his mistresses.

Unlike some of Charles' other mistresses, Nell was popular with the public for her ready wit, she was the least grasping and never suffered from any illusions regarding herself. At the height of the Exclusion Crisis, when the religious feeling was at boiling point, Nell's coach was attacked by an angry mob who mistook her for the Catholic foreign mistress. "Pray good people be civil" she cried, sticking her head out of the window, "I am the Protestant whore!"

The diarist Samuel Pepys wrote in January 1667, "...to the King's house, and there saw "The Numerous Lieutenant," a silly play, I think; only the Spirit in it that grows very tall, and then sinks again to nothing, having two heads breeding upon one, and then Knipp's singing, did please us. Here, in a box above, we spied Mrs. Pierce; and, going out, they called us, and so we staid for them; and Knipp took us all in, and brought to us Nelly; a most pretty woman, who acted the great part of Coelia to-day very fine, and did it pretty well: I kissed her, and so did my wife; and a mighty pretty soul she is." 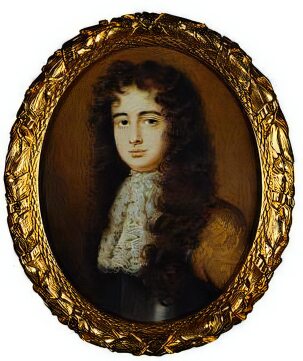 Nell gave birth to her first son, Charles Beauclerk, on 8 May 1670. A second son, James Beauclerk was born in 1671, but died at a boarding school in Paris in 1680, the circumstances of his life in Paris and the cause of his death are both unknown, one of the few clues being that he died "of a sore leg".

Unlike Charles' other mistresses, Nell never received a title herself, but she obtained a title for her son. When Charles Beauclerk (pictured above right and left) was six years old, on the arrival of the King, Nell said, "Come here, you little bastard, and say hello to your father." When the King protested, she replied, "Your Majesty has given me no other name by which to call him." On 21 December 1676, Charles II granted to Charles Beauclerk, the titles of Baron of Heddington and Earl of Burford. On 5th January 1684, he was created Duke of St Albans. Shortly afterwards, the King granted a house which was renamed Burford House, on the edge of the Home Park in Windsor, to Nell and their son, where she lived when the King was in residence at Windsor Castle.

Her last stage appearance occurred in late 1670, as Almahide in The Conquest of Granada by Dryden. Its production had had to be postponed for some months while the theatre awaited her return after the birth of her first son. Charles II then built 'Burford House,' for her, a mansion on the edge of Windsor Home Park, 250 yards from Windsor Castle. He also gave her a house at 79, Pall Mall, where John Evelyn reported seeing her leaning over her garden wall chaffing her royal lover. She had a magnificent silver bed in the house, adorned with the king's head and figures of cupids and slaves, as well as crowns and an eagle. She also spent a fortune on paintings, furnishings, entertainment, dresses and expensive food. She retained Charles' II affection as much by her wit as her looks and their relationship was to last for sixteen years.

King Charles II died at Whitehall Palace, London, probably of uremia, a syndrome caused by dysfunction of the kidneys, on 6th February 1685. James II, following his brother's deathbed wish, "Let not poor Nelly starve," paid most of her debts and gave her a pension. He asked in return that she and her son should convert to Catholicism but she refused to. Nell survived her royal lover by less than three years. In March 1687, she suffered a stroke that left her paralysed on one side. In May, a second stroke rendered her bedridden in her house at Pall Mall. She died at the age of 37, from apoplexy "almost certainly due to the acquired variety of syphilis" at ten in the evening on 14 November 1687.

Although she left considerable debts, always charitable in memory of her father, in her will she left a legacy to the Newgate prisoners in London. Her funeral drew a large audience for the last time, the funeral sermon was preached by Thomas Tenison, afterwards Archbishop of Canterbury. Nell was buried with her mother in the Church of St Martin-in-the-Fields, in London.

On 17 April 1694 her son Charles Beauclerk married Lady Diana de Vere, daughter and heiress of Aubrey de Vere, the last Earl of Oxford. The marriage was to produce 12 children.