Anne Mortimer, ancestress of the House of York from whom they derived their claim to the throne, was was born at New Forest, Westmeath, one of her family's Irish estates on 27 December 1390. Anne was the eldest daughter of Roger Mortimer, 4th Earl of March, and Eleanor Holland. 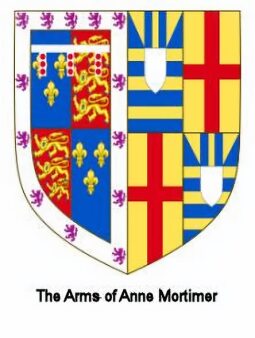 The Mortimers were a powerful aristocratic family of the Welsh Marches, centred around Wigmore Castle in Herefordshire, who from the fourteenth century held the title of Earl of March. The surname is of Norman origin, and translates as 'stagnant lake' and is said to derive from either "Mortemer", the site of the Cistercian Abbaye de Mortemer at Lisors near Lyons-la-Forêt, close to Rouen or from the village of Mortemer further north in the Seine-Maritime, which predates the Abbey at Lisors by more than a hundred years.

When the first Lancastrian king Henry IV usurped the throne of his cousin Richard II, Anne's two brothers, viewed as a threat by the new king, were kept in custody at Windsor and Berkhampstead castles, their sisters Anne and Eleanor, remained in the care of their mother until her death in 1405 and were described as 'destitute' after her death.

In May 1406, Anne married Richard of Conisburgh, the second son of Edmund of Langley, 1st Duke of York, fourth son of Edward III and his first wife Isabel, the daughter and coheir of Pedro the Cruel, King of Castile and Leon. The marriage took place without their parent's consent but was validated on 23 May 1408 by papal dispensation. The couple had two sons and a daughter:-

(3) Richard, 3rd Duke of York (21 September 1411 - 30 December 1460), married Lady Cecily Neville, youngest daughter of Ralph Neville, 1st Earl of Westmorland and Lady Joan Beaufort (daughter of John of Gaunt and half sister of King Henry IV), by whom he had twelve children 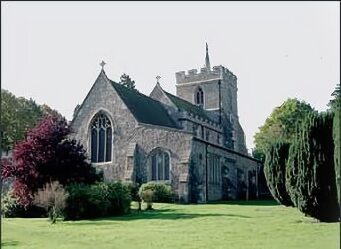 Anne Mortimer died soon after the birth of her third child, Richard Plantagenet. She was buried at Kings Langley, Hertfordshire, once the site of Kings Langley Palace, possibly in All Saint's Church which housed the tombs of her husband's parents, Edmund of Langley, 1st Duke of York, and Isabel of Castile, daughter of Pedro the Cruel of Castille. On 22 November 1877, the bodies of Edmund, Duke of York, Isabella of Castille and what was most likely that of Anne Mortimer was exhumed from their tomb at All Saint's. Professor George Rolleston examined the skeletons:-

"I examined three skeletons at King's Langley. Of these one was the skeleton of a powerful man, considerably past the middle period of life; a second was the skeleton of a woman, as far as I could judge, between thirty-five and forty years of age; the third had belonged to a younger woman, whose age, however, could not have been very far from thirty. The bones of the first two had got somewhat intermingled; those of the third had been kept safely apart from intermixture in a leaden coffin. 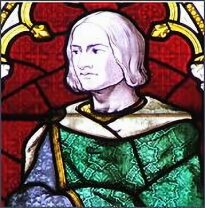 The skeleton of a woman about thirty years of age, a little over, probably, rather than under that age, with some auburn hair remaining, though detached from the skull. The wisdom tooth was absent in the lower jaw on the left, and one pre-molar was absent on the right side. She was between 5 foot 3 and 5 foot 5 in height.

After Anne's death, her widower Richard, Earl of Cambridge (pictured left), remarried to Maud Clifford, the ex-wife of John Neville, 6th Baron Latimer, and daughter of Thomas de Clifford, 6th Baron de Clifford, In 1415 he conspired to depose King Henry V, and place his late wife's brother, Edmund Mortimer on the throne. Mortimer lost his nerve and revealed the plot to the King, and served on the commission which condemned his brother-in-law Cambridge to death.

Cambridge was beheaded on 5 August 1415 and buried in the chapel of God's House at Southampton. Although Richard, Earl of Cambridge's title was forfeited, he was not attainted, and his and Anne Mortimer's four-year-old son, Richard, was his heir. Three months later Cambridge's elder brother, Edward of Norwich, 2nd Duke of York, was killed at the Battle of Agincourt most likely smothered in his armour and the four-year-old Richard of York succeeded to the Dukedom of York and his uncle's vast estates. Anne's youngest brother, Roger Mortimer died without issue circa 1413 and on the death of her childless elder brother Edmund Mortimer on 18 January 1425 his claim to the throne also devolved upon his nephew Richard Plantagenet.