Geoffrey Plantagenet was the fourth son of King Henry II and his wife, Eleanor, Duchess of Aquitaine. He was given the name of his paternal grandfather, Geoffrey V Count of Anjou.

While Geoffrey was still an infant, Henry II arranged his marriage to Constance of Brittany, the daughter of Conan IV, Duke of Brittany and Earl of Richmond, and Margaret of Huntingdon, who was the daughter of Henry of Scotland, Earl of Huntingdon and Northumbria, and Ada de Warenne. Margaret was, therefore, the sister of Kings Malcolm IV and William the Lyon of Scotland. Constance of Penthièvre was Conan's only child and thus the heiress of Brittany, Henry and Conan had been at war and it was hoped that the diplomatic arrangement would bring an end to hostilities. 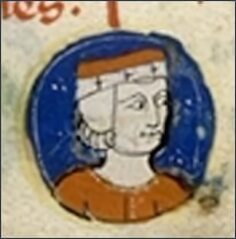 The Breton lords had rose rebellion against Duke Conan, who sought aid from the English king. Accordingly, Henry seized the lands along the Breton-Norman border In 1164 and 1166 invaded the Duchy of Brittany to punish the Breton lords, he then forced Conan to abdicate and to grant Brittany to his daughter Constance; Constance was handed over to Henry and was betrothed to his son Geoffrey and thereby Henry gained direct control of the Duchy of Brittany.

King Louis VII of France was alarmed by Henry II's growing power and the amount of territory he held in his French Angevin Empire in Louis' kingdom. Growing tensions between the two finally erupted into open war in 1167, which was triggered by a disagreement between the two kings about how money intended for the Crusader states of the Levant should be collected. Louis formed an alliance with the Welsh, Scots and Bretons against Henry and attacked the Duchy of Normandy. Henry, in turn, reacted by attacking Chaumont-sur-Epte, where Louis kept his main military arsenal, burning the town to the ground, by which means he forced Louis to abandon his allies and settle on a private truce. This then freed Henry hands to deal with the rebel barons in Brittany, where feelings about his seizure of the duchy still festered. In 1169 Geoffrey visited his duchy for the first time and received the homage of the Breton barons in Nantes. On the death of Conan of Brittany in 1171, he further inherited the Earldom of Richmond, which Conan had inherited from his forbear Alan Rufus, who took part in the Norman conquest of England.

At the age of fifteen, Geoffrey joined his brothers in rebellion against his father, Henry II was attempting to negotiate a marriage for his youngest son, John, the prospective father-in-law asked that John be given some property. The King responded by granting John three castles in Anjou. The young Henry promptly objected and demanded either England, Normandy or Anjou to rule in his own right and fled to the French court. Led on by his father-in-law, the King of France, who had his axe to grind, the young Henry rebelled against his father. He was joined at the court of France by his equally turbulent brothers, Richard, Duke of Aquitaine and Geoffrey, but Geoffrey and his father were later reconciled in 1174 when his father forgave him and he participated in the truce meetings at Gisors. 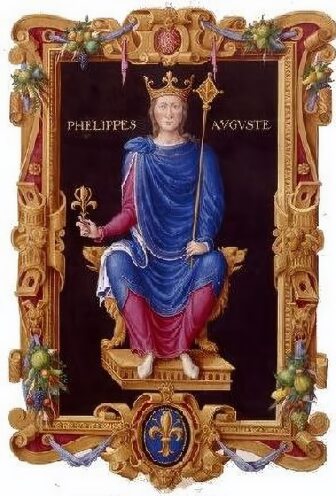 Geoffrey, at the age of twenty two, was invested with the duchy, and his marriage to the twenty one year old Constance was celebrated in July 1181. The marriage was to produce three children, the youngest born posthumously:-

Geoffrey again rose in rebellion against his father in 1183, when he fought his brother Richard, Duke of Aquitaine (the future King Richard I 'the Lionheart' on behalf of his eldest brother Henry the Young King. Following the death of his eldest son Henry the Young King, Henry II planned to re-divide the Angevin Empire, giving Anjou, Maine, Normandy and England to Richard and asking him to relinquish his mother's province of Aquitaine to John. In the finest Plantagenet tradition, Richard, incensed, absolutely refused to do so. John and Geoffrey were dispatched to Aquitaine to wrest the province from their brother by force but were no match for him. The King then ordered all of his turbulent sons to England. Richard and Geoffrey now thoroughly detested each other and arguments, as ever, prevailed amongst the family.

Geoffrey had a close relationship with the wily Philip Augustus of France, the heir to the French throne and joined in alliance with him on several occasions against his father, Henry II. Geoffrey spent much time at Philip's court in Paris, and Philip made him his seneschal. There is evidence to suggest that Geoffrey was yet again planning a rebellion against his father with the aid of Philip, during his final stay in Paris in the summer of 1186. Geoffrey accordingly acquired a reputation for treachery. Gerald of Wales stated of him:-

He has more aloes than honey in him; his tongue is smoother than oil; his sweet and persuasive eloquence has enabled him to dissolve the firmest alliances and his powers of language to throw two kingdoms into confusion.'

He evoked much criticism by attacking monasteries and churches to raise funds for his campaigns. This lack of reverence for religion earned him the dislike of the Church, which is reflected in the negative comments of the majority of chroniclers who were to write accounts of his life. 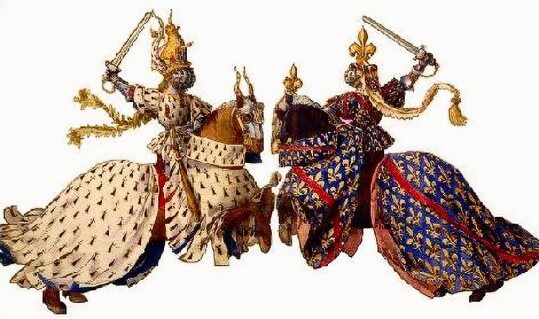 Geoffrey died in Paris on 19 August 1186, at the age of just twenty-seven. There are two alternative accounts of his death and evidence exists to support an alternative date of death on 21 August 1186. The more common first version states that he was trampled to death by horses in a Paris jousting tournament. At his funeral, according to the chronicler Gerald of Wales, the grief-stricken Philip was reported to have been so distressed at his death that he attempted to join Geoffrey in the coffin.

In the alternative version of the events, contained in the chronicle of the French Royal clerk Rigord, Geoffrey died of sudden severe chest pain, which reportedly occurred immediately after a bragging speech to Philip, boasting his intention to lay waste to his father's duchy of Normandy. Possibly, this version was an invention of its chronicler; sudden death from a mysterious cause being seen as God's judgment of an ungrateful son plotting rebellion against his father, and for Geoffrey's irreverence of the church.

His half-sister, Marie of Champagne, the daughter of Eleanor of Aquitaine and Louis VII attended the requiem for her half-brother and established a mass for the repose of his soul. Geoffrey was buried at Notre Dame de Paris Cathedral, his tombstone was later destroyed in the eighteenth century before the French revolution.

After Geoffrey's death, Henry II arranged for the marriage of his young widow Constance, to Ranulph, Earl of Chester. Ranulph became Duke of Brittany, jure uxoris, for a short time before the marriage was annulled, in 1189 she married for the third time to Guy of Thouars. Constance acted as regent for her and Geoffrey's young son Arthur, until her death at the age of 40, from complications that arose in the birth of her twin daughters Alix and Katherine of Thouars, on 5 September 1201 at Nantes. Arthur was later murdered while in the custody of Geoffrey's younger brother, King John. His surviving daughter Eleanor of Brittany was held in captivity in England for her entire life, she died as a nun in 1241 at the age of fifty-seven and was eventually buried at Amesbury Abbey.