The Holland family were the children and grandchildren of Joan, Countess of Kent and her first husband Thomas Holland of Upholland in Lancashire.

Joan, known as 'the Fair Maid of Kent' was the daughter of Edmund of Woodstock, 1st Earl of Kent and Margaret Wake, 3rd Baroness Wake of Liddell. Joan's father was the second son of King Edward I and his second wife, Margaret of France. He was executed on March 19, 1330, for conspiring against Roger Mortimer, Earl of March. Joan was only two years old at the time, her mother, Margaret Wake and her four children were placed under house arrest in Arundel Castle. When he assumed power from his mother and Mortimer, Joan's cousin King Edward III, took on the responsibility for the family. The Queen, Philippa of Hainault, of whom Joan became a favourite, had her brought up at court, where she became friendly with her cousins, including Edward, the Black Prince, he was just two years younger than Joan and developed a strong affection for her, calling her his 'Jeanette'.

Joan, 'the Fair Maid of Kent' 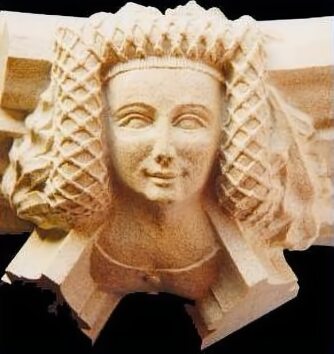 In 1340, at the age of twelve, Joan secretly married Thomas Holland of Upholland in Lancashire, the second son of Robert Holland and Maud la Zouche. Holland was around thirteen years her senior, the marriage took place without first gaining the consent of the King.

The following year, while Holland was abroad taking part in a crusade in Prussia, she was forced by her family to marry William Montacute, the son and heir of the first Earl of Salisbury, both were about thirteen at the time. Joan later claimed that she did not disclose her existing marriage with Thomas Holland because she had been afraid that disclosing the fact would lead to Thomas's execution for treason. 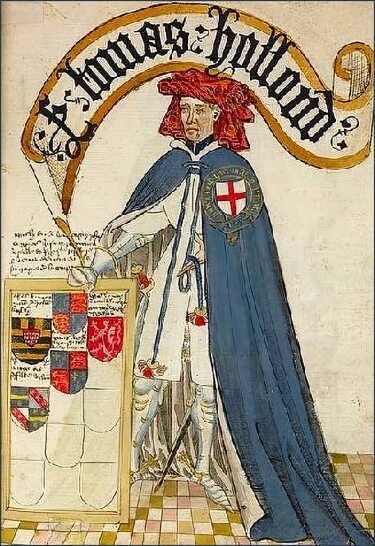 Several years later, Holland returned from the Crusades and the full story of his earlier marriage to Joan was revealed causing a great scandal at the time. Thomas confessed the secret marriage to King Edward III and appealed to the Pope for the return of his wife. The nineteen-year-old William Montacute was unwilling to give up his wife, when he discovered that Joan had supported Holland's case, he kept her a prisoner in her own home. It took Pope Clement VI eighteen months to decide the issue. In 1349, he finally annulled Joan's marriage to the Earl and sent her back to Thomas Holland, with whom she lived for the next eleven years. Joan's brother, John, Earl of Kent, died in 1352, on which Thomas Holland became Earl of Kent in right of his wife.

They had five children before Holland died at Rouen on 26 December 1360, after which Joan married her cousin, Edward, the Black Prince:-

Thomas Holland was born in Upholland, Lancashire, in 1350 or 1354. On 28 December 1360, he became Baron Holand. In 1366, at the age of sixteen, Thomas was appointed captain of the English forces in Aquitaine. Over the following ten years, he fought in various campaigns, including the Battle of Nájera, under the command of his stepfather, Edward, the Black Prince. Thomas Holland married Alice FitzAlan, daughter of Richard FitzAlan, 10th Earl of Arundel on 10 April 1364. The marriage produced nine children:-

1st Duke of Surrey (1374 - 7 January 1400), was beheaded in 1400 by a mob of angry citizens at Cirencester for his role in the Epiphany Rising, which was aimed against the life of King Henry IV of England, who had usurped the throne of King Richard.

Thomas Holland's half-brother Richard II succeeded to the English throne on the death of his grandfather in 1377, and Holland acquired great influence over his young king, which he used for his enrichment. In 1381, he succeeded as Earl of Kent. Holland died at Arundel Castle, Sussex, England on 25 April 1397.

During the reign of his half brother Richard II, John Holland took part in Richard's 1385 expedition to Scotland. An archer in the service of Ralph Stafford, eldest son of the Earl of Stafford, killed one of Holland's esquires. Stafford approached Holland to apologize, but Holland, who had a violent temper, killed him as soon as he identified himself. John Holland sought sanctuary at the shrine of St John of Beverley. On the King's return, Holland was condemned to death. Joan pleaded with her son for four days to spare his half-brother. On the fifth day, she died, at Wallingford Castle, reportedly of grief at the quarrel between her sons. Joan was buried, following a request in her will, not by her royal husband at Canterbury but the Greyfriars at Stamford in Lincolnshire, beside her first husband, Thomas Holland. Early the following year Holland became reconciled with the Staffords, and had his property was restored to him.

In 1386 he married Elizabeth of Lancaster, the second daughter of John of Gaunt, Duke of Lancaster and Blanche of Lancaster. The marriage produced six children:- 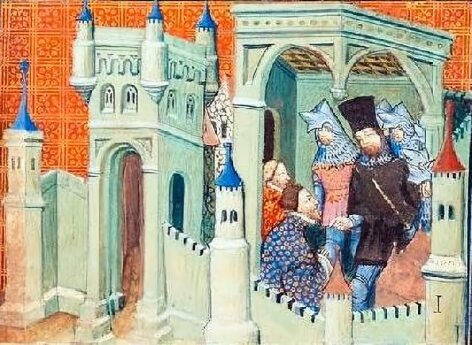 He accompanied Gaunt on his expedition to Spain, where Holland was constable of the English army. After his return to England, he was created Earl of Huntingdon, on 2 June 1387. John Holland assisted in the downfall of Thomas of Woodstock, 1st Duke of Gloucester (fifth son of Edward III) and Richard Fitzalan, 11th Earl of Arundel in 1397 for which he was rewarded by being created Duke of Exeter on September 29.

Holland accompanied Richard on his fateful 1399 expedition to Ireland. On their return to Pembrokeshire, he advised the king to go to Conway. Richard was deposed and Bolingbroke took the throne as Henry IV. The new king called to account all those who had been involved in Thomas of Woodstock's fall and confiscated all the titles Richard had bestowed on them after Thomas' arrest.

Early the following year John Holland became involved in a plot, known as the Epiphany Rising, along with his nephew Thomas Holland, Earl of Kent, Thomas le Despencer, 1st Earl of Gloucester, and others. The conspiracy aimed to assassinate Henry IV and restore the imprisoned Richard II to the throne.

The plot failed, Holland was forced to flee but was caught near Pleshy Castle in Essex. He was executed on the orders of Joan Fitzalan, Countess of Hereford, Henry IV's mother-in-law and sister of the executed Earl of Arundel who Holland had arrested some years before. His head was afterwards exposed, probably at Pleshey, until the king, at the supplication of Holland's widow, his sister Elizabeth, ordered its delivery to the 'master or keeper of the college of the church of Plessy,' where it was buried with his body.

Holland's lands and titles were forfeited, but eventually, they were restored for his second son John Holland, 2nd Duke of Exeter, who served in Henry V's 1415 Agincourt campaign. His grandson, Henry Holland served as a Lancastrian commander at the decisive Yorkist victory of the Battle of Towton. He fled to Scotland after the battle, then went into exile in France. He was attainted in 1461, and his estates were given to his wife, Anne of York, the sister of Edward IV, who separated from him in 1464. At the Battle of Barnet, he commanded the Lancastrian left flank. Although badly wounded and left for dead, he survived. Afterwards, he was held captive and Anne divorced him in 1472. He later served on Edward's 1475 expedition to France. On the return voyage, he was reported to have fallen overboard and drowned, although it was rumoured that Exeter had been thrown overboard at the king's command. He left a daughter, Lady Anne Holland who was married to Thomas Grey, 1st Marquess of Dorset, the son of Edward's Queen, Elizabeth Woodville, by her first marriage.

Born in 1359, Maud was married firstly to Hugh Courtenay son of Sir Hugh Courtenay and Elizabeth de Vere, Maud had no children by her first marriage. She was married secondly to Waleran III of Luxembourg, Count of Ligny (1355-1415) at Windsor Castle in 1380 and gave birth to a daughter, Jeanne (d. 1407), who married Antoine, Duke of Brabant in 1401. Maud died in 1391.

Born circa 1354, Edmund died young and was buried in the church of Austin Friars, in London.