Berengaria of Navarre was born circa 1165 the eldest daughter of Sancho VI 'the Wise' King of Navarre and Sancha of Castile. She had 3 brothers, Sancho (the future King Sancho VII of Navarre), Ferdinand and Ramiro, Bishop of Pamplona and two sisters Constance and Blanche of Navarre, who married Count Theobald III of Champagne.

Berengaria was described as having dark hair and eyes, "petite, and a fine musician... in all things, a suitable consort for a king". Ambroise, a contemporary Norman minstrel, described her as "elegant and prudent".

Berengaria of Navarre from the effigy at the abbey of L'Épau

Richard I of England 'the Lionheart' had been betrothed since infancy to Alys of France, the sister of King Phillip Augustus. However, Richard's father, King Henry II, had made Alys his mistress, and Richard was, therefore, reluctant to marry her. Gossip claimed Alys to have even borne the late King's child.

Richard's mother, Eleanor of Aquitaine, the Dowager Queen of England selected Berengaria as a future wife for her son. A marriage with Berengaria was desirable as it would bring a dowry that would aid Richard finance in the Third Crusade and would provide protection for the southern borders of Aquitaine. Richard was a great friend of her brother, Sancho, Berengaria had met Richard only once prior to their espousal, at a tournament at Pamplona held by her father.

Richard the Lionheart statue outside the Houses of Parliament 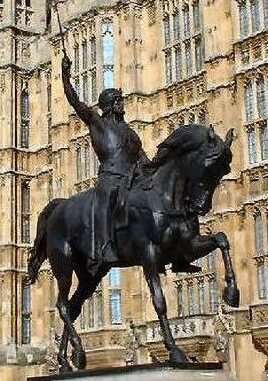 The indomitable Eleanor of Aquitaine, then aged 70, travelled over the Pyrenees to collect Berengaria and escort her to Sicily where they were due to rendezvous with Richard. On reaching Sicily they were joined by Richard's sister, Joanna, the Dowager Queen of Sicily. They were expecting to meet up with Richard in Messina, but he had already continued on his journey to the Holy Land. Berengaria and Eleanor had arrived at Sicily during Lent, and so the marriage could not take place until after Easter.

The voyage to the Holy Land continued, but the ship carrying Berengaria and Joanna was shipwrecked on the coast of Cyprus in the course of a violent storm. The Cyprians besieged the English survivors of the wreck at Limassol. A large amount of treasure, intended for use on the crusade, was appropriated by Isaac Comnenus, the Emperor of Cyprus. Richard dispatched a letter to Isaac, which was arrogantly ignored. Outraged, he unleashed the full force of the famed Plantagenet fury on the unfortunate Isaac. The Cyprian Emperor was overthrown and English governors were set up over the island which was used as a garrison for the crusade.

Berengaria and Richard were married on May 12, 1191, at the Chapel of St George at Limassol on Cyprus, she was crowned Queen of England the same day by the Archbishop of Bordeaux and the Bishops of Évreux and Bayonne. She travelled on to Acre in Palestine with Richard and accompanied him for the first part of the crusade. When Richard finally agreed on a truce with his enemy, Saladin, Berengaria left the Holy Land for Poitou in France, Richard was taken prisoner on his way back to Europe in 1192 by Duke Leopold of Austria, whom Richard had insulted gravely in the early stages of the crusade and was held prisoner in Germany until 1194 when his mother Eleanor arranged for his ransom.

The marriage of Berengaria and Richard produced no children, Richard proved to be an indifferent husband, more interested in his warfare than his wife. He was rumoured to have been homosexual, and though he did have at least one illegitimate child, Philip of Cognac. On his release he made no effort to send for Berengaria, and a priest is said to have ordered him to reconcile with his wife. Richard was ordered by Pope Celestine III to reunite with Berengaria and to show fidelity to her in the future.

When he fell ill and thought death was near, Richard vowed that if he recovered he would never leave his wife again. He did recover, and true to his vow, he went to Poitou and became reconciled with Berengaria. An entry in the Polychronicon records- "The King took to him his Queen Berengaria, whose society he had for a long time neglected, though she were a royal, eloquent, and beauteous lady, and for his love had ventured with him through the world." He granted her the revenues arising from mines in Cornwall and Devonshire as her dower. The couple's reconciliation was short-lived however and Richard, despairing of heirs by his queen, eventually named his younger brother John as heir to England.

Berengaria of Navarre from the effigy at the abbey of L'Épau 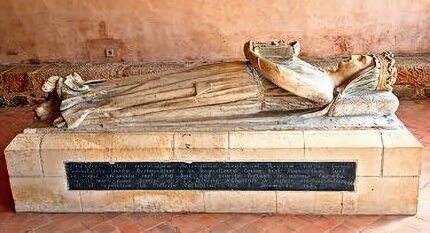 Richard the Lionheart died on 6th April 1199 at Chalus in Limoges, from a crossbow bolt wound infected by gangrene. His mother was by his bedside at the end. His neglected wife was not even summoned, but she was reported to be greatly distressed at his death.

Berengaria although Dowager Queen had never seen England, she never remarried and lived on at Le Mans in Maine, one of her dower properties. Richard's successor, his younger brother King John, seized much of her property and failed to pay her pension. She sent envoys to complain and Eleanor of Aquitaine and the Pope, Innocent III, both intervened. The Pope threatened John with an interdict if he did not pay, but he never paid most of what was owed to her, at his death, he still owed Berengaria more than £4000. John's son, King Henry III, finally did pay much of what she was owed.

She founded the abbey of L'Épau on the outskirts of Le Mans in 1229 and entered the convent there. Berengaria died on 23 December 1230, before the Abbey, was finished and was buried there according to her wishes. Her tomb monument has been moved many times over the proceeding centuries and doubt remains over the exact location of her burial. A skeleton of a woman who died in her sixties, which thought to be hers, was uncovered by Pierre Térouanne in 1960 during the restoration of the abbey. These remains are preserved beneath the stone effigy of the queen, which is now in the chapter house of the abbey.

The Ancestry of Berengaria of Navarre