The Great Fire of London

The Great Fire of London began before dawn on Sunday, 2nd September 1666 and raged for four days, in the course of which the historic medieval city known to Chaucer and Shakespeare vanished.

The fire started in the bakery of one Thomas Farynor, the bakery was situated amongst the wooden houses that lined narrow Pudding Lane, near London Bridge. Farynor and his family were trapped on the upper storey but affected their escape from an upstairs window to the house next door, a maidservant who was not alerted became the first victim of the fire.

The Great Fire of London 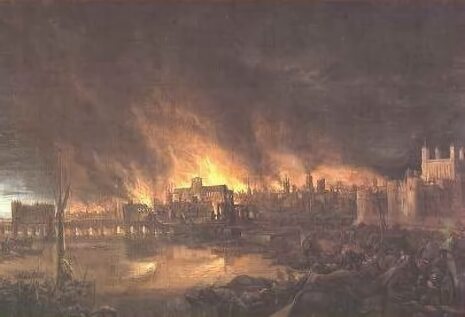 The flames were fanned by a persistent east wind and spread into neighbouring Thames Street, where stores of tallow, oil, spirits and hemp were kept in warehouses and cellars. While along the wharves, coal, timber and hay lay in heaps. The fire soon began to devour the houses of nearby streets along the course of the River Thames.

The fire is reported in the diary of an eyewitness, Samuel Pepys, who wrote that he had been called to see the fiery red glow over the city from a window of his home in Seething Lane, around a quarter of a mile from Pudding Lane, at 3 a.m:-

'Some of our maids sitting up late last night to get things ready against the feast today, Jane called us up, about 3 in the morning, to tell us of a great fire they saw in the City. So I rose, slipped on my nightgown and went to her window, and thought it to be on the back side of Markelane at the furthest; but being unused to such fires as followed, I thought it far enough off, and so went to bed again and to sleep.'

He was amazed to see the still-raging fire on waking the following morning. He went to investigate the reports of the fire, going to the Tower of London, where he climbed to a high turret from where he could examine its extent, he relates to his diary 'I did see the houses at the end of the bridge all on fire, and an infinite great fire on this and the other end of the bridge'

Hurrying through the panic gripped streets of the city on his way to inform King Charles II at Whitehall of the disaster, Pepys, appalled at the extent of the fire, reports a scene of devastation and confusion as the blaze raged angrily out of control.

The fire continued to blaze throughout Monday, 3rd September, pushing west and northwards into the heart of the City. Order in the streets was difficult to maintain as rumours flew around of suspicious foreigners causing the firestorm. The fears appeared to focus on England's enemies, the French and Dutch. Observers bear witness to the despair and helplessness which seemed to grip the city's population on the second day.

Pepys graphically reports on its advance:-

'we saw the fire as only one entire arch of fire from this to the other side of the bridge, and in a bow up the hill from an arch of above a mile long: it made me weep to see it. The Churches, houses, and all on fire, and flaming at once, and a horrid noise the flames made, and the crackling of houses at their ruin.' He later continued, ' All over the Thames, with one's face in the wind, you were almost burned with a shower of fire drops. As it grew darker, appeared more and more. A most horrid, malicious, bloody flame.'

On the morning of the Tuesday, while Cheapside blazed, the king and his brother, James, Duke of York, came down from Whitehall to see the fire for themselves, passing through streets crowded with streams of refugees struggling with what possessions they had managed to salvage from their homes. In an attempt to curb its relentless advance, Charles II ordered the demolition of those houses in the direct path of the fire, himself helping in the fire fighting operation by taking buckets and spades and distributing money to the workmen. However, as quickly as a gap was created in the path of the fire it was vaulted by the leaping flames and hundreds of London's citizens were becoming homeless with each passing hour as the situation rapidly became desperate. Pepys came across the Lord Mayor in Canning Street looking 'like a man spent, with a handkerchief about his neck.

There was no efficient fire fighting force or methods in seventeenth-century London. Leather buckets, ladders, axes and iron fire hooks were expected to be stored in every church in the city, but these provisions had been neglected over the years. There were also devices known as fire squirts, each comprising of a hollow cylinder, around two feet long and had side handles and a suction piston at one end. Their maximum capacity, however, was less than a gallon.

Samuel Pepys feared for his own home and prepared his most important papers for removal along with his money, in the form of bags of gold, which were kept at his home and had most of his household goods carried out into the garden. Borrowing a cart from a neighbour, he rode in his dressing gown through the night to deliver his money and most valuable possessions to a house in Bethnal Green. While he buried his wine and some Parmesan cheese in his garden.

The medieval cathedral of St. Paul's, at the spiritual heart of the city, was engulfed by the flames and its many treasures lost. It had been surrounded by wooden scaffolding at the time, in preparation for its restoration by Sir Christopher Wren. This scaffolding ignited and the flames licked at the walls of the building, creeping up and setting fire to its wooden roof beams, causing the lead roof to melt. 'The stones of Paul's flew like granados [grenades],' wrote the diarist John Evelyn, 'the melting lead running down the streets in a stream and the very pavements glowing with fiery redness.'

The thousands the fire had rendered homeless were temporarily housed at a camp set up at Moorfields, which the king visited, assuring them that the fire was not the result of a Papist plot, which was widely rumoured at the time.

By Thursday, 6th September, the wind began, at last, to abate and the fire died down, it had destroyed four-fifths of the total area of the city, leaving behind a charred wilderness and heaps of smoking rubble, which according to Pepys account, still smouldered in January. The fire devastated an area around one and a half miles long and half a mile wide. Over thirteen thousand houses had been destroyed, the Guildhall, the exchange, 87 churches, taverns and shops. There is no accurate recording of how many people lost their lives. A member of Lincoln's Inn recorded woefully: 'you may see from one end of the City almost to the other. You may compare London (were it not for the rubbish) to nothing more than an open field.'

While John Evelyn related of strolling sadly through the smouldering ruins:-

The stench that came from some poor creatures bodies.....In five or six miles traversing about it, I did not see one load of timber unconsumed, nor many stones but what were calcinated white as snow. The people, who now walked about the ruins appeared like men in some dismal desert...the ground and air smoke and fiery vapour continued so intense that my hair was almost singed and my feet unsufferably surbated...I then went toward Islington and Highgate, where one might have seen two hundred thousand people of all ranks and degrees dispersed, and laying along by their heaps of what they could save from the fire deploring their loss'.

All-Hallows-the-More church was so damaged by the intensity of the heat that part of the roofless shell that survived later toppled in a gust of wind.

A healthier cleaner London arose from its ashes. Charles II ordered an immediate survey of the damage and appointed Sir Christopher Wren as the principal architect for rebuilding the who designed the new St. Paul's Cathedral. Incredibly, within four years, the city was rebuilt. The monument erected to commemorate the momentous event declares proudly 'London rises again'.